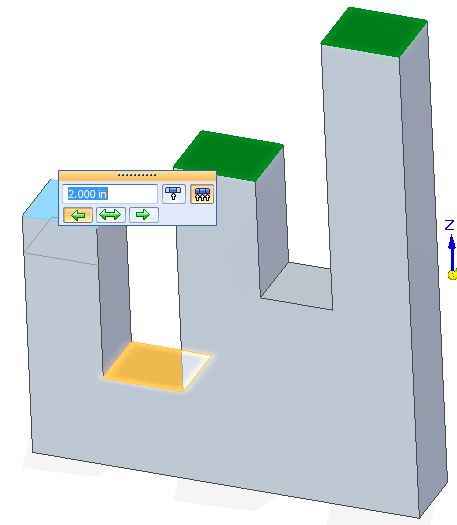 In ST7 we have introduced numerous enhancements to the Offset Face Relate command.

Offset to faces with parallel normals Face relationships between faces with parallel normals are now possible in ST7.

Of course implicit in the ability to create offsets to faces with parallel normals is the ability to define Offset Face relationships with negative values. Thus you can now define or edit an Offset so that the face is offset to either side of the reference face. If you specify a negative offset, it will revert to a positive value on subsequent edits.

Offset to faces between bodies

Additionally, you can now establish Offset Face relationships between faces on different design bodies in the model file. You can also establish an offset between a face on a model you have In Place Activated, referencing faces on other components in an assembly. Such Offset Relationships between component faces will not be persistent, nor will any links between parts be established. It’s just a new way to move a face relative to a face on another component in an assembly. Selecting a face involved in more than one Offset Face relationship. Last but not least, we have added a new Offset Face relationship command called “Standard Align”.

What the Standard Align command allows you to do is to select multiple faces as seed faces, and then select a single target that all of the seeds will be offset from. You can then select each seed face and define a unique offset value for it. When you are completed, an offset relationship will be created for each seed face, and all of them will be grouped together. Of course the previous Offset types, Single Align and Multiple Align, are still available as before.

I hope you find these new enhancements a useful and powerful way to explicitly control your geometry in the Synchronous modeling environment.

This article first appeared on the Siemens Digital Industries Software blog at https://blogs.sw.siemens.com/solidedge/offset-face-relate-enhancements-by-steve-sheldon/