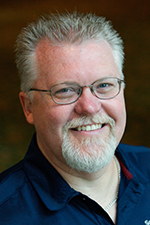 Doug Stainbrook was one of the first people I met on the inside of Solid Edge, six or seven years ago. He was the guy who had the job of demonstrating brand new technology (Synchronous Technology) to a loudmouth self-appointed CAD critic who used the competitor’s software (me).

I’ve spent a decade doing training and demonstrations myself, and I have to say that Doug is the perfect guy for this kind of work. He’s patient, has a great sense of humor, doesn’t take the wrong stuff too seriously, and of course knows his stuff inside and out. Plus, he’s just a genuinely great guy. A lot of people have helped me out at Solid Edge, but Doug has probably been the most helpful.

End users may not run into Doug every day, but when you’re at Solid Edge University or the regional productivity events, you should be sure to introduce yourself and ask him your favorite Solid Edge questions.

I got to ask Doug some questions myself, here’s what he had to say:

I would say “yes”.The ability to fence select geometry and then stretch, move and drag it feels a lot like what you do in 2D drawings. You can align and persist geometric relationships between a set of faces using face relationships. This is very similar to how you select 2D elements to create persisted geometric relations between them. Adding dimensions to the actual 3D model could also be compared to how you would dimension a 2D drawing or a sketch entity.

Not exactly! I came from the history-based modeling background and felt very confident in my abilities to model just about anything quickly. My colleague adopted synchronous first and one day challenged me to a modeling duel. He completed the model usingsynchronous far before me.It was then that I thought I needed to take a closer look at it.  Now I would feel as though my arm were cut off if I was forced to go back to history-based modeling only.

Dora Smith did a video interview with Doug at Solid Edge University 2012 about why he became an engineer:

Sophia Valentine cuts a clear path with a CNC plasma cutter… February 16, 2022 Discover how 20-year-old Sophia Valentine uses self-taught sketching, 2D CAD, sheet metal and welding skills to operate a CNC table…
Solid Edge Startup Spotlight: Flying through virtual worlds… March 10, 2021 During his time at the MIT Media Lab, Patrik Künzler came up with the idea of developing a chair that…
Solid Edge Startup Spotlight: 120km range, up to 6kg payload… March 7, 2021 Tom Plümmer is the co-founder of Wingcopter, an aviation startup from Darmstadt that has dedicated itself to the subject of…

This article first appeared on the Siemens Digital Industries Software blog at https://blogs.sw.siemens.com/solidedge/interview-with-doug-stainbrook-field-support-trainer/