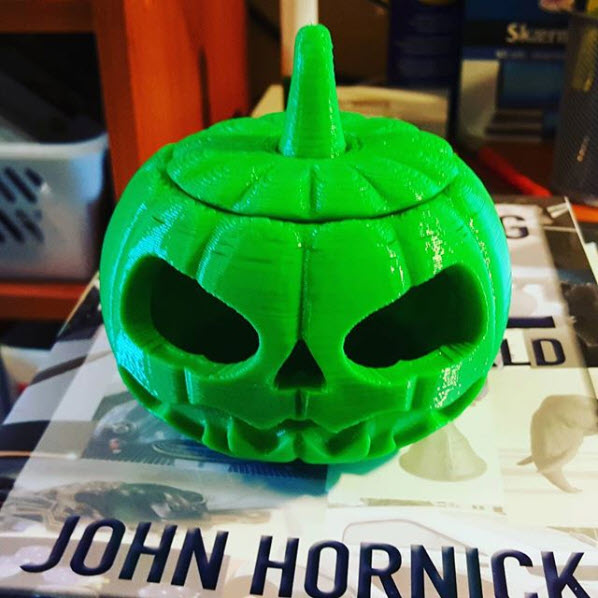 Pumpkin designed in Solid Edge by Arnas Vipas. Check him out on Instagram @arnasvipas for more.

Happy Halloween to all Solid Edge users! I don’t know about you, but Halloween is one of my favorite holidays. Rotting your teeth with bowls full of candy, carving silly or creepy faces into pumpkins, and scaring yourself senseless with horror movie marathons? Count me in! To celebrate this spooky day, I’m sharing some of the awesome Jack-o’-lantern designs people have created over the years. The best part about a digital Jack-o’-lantern is that it stays looking good long after your real pumpkin has rotted away.You can even 3D print it if you are so inclined to have a physical version you can keep for years and reuse with every Halloween!

In addition to sharing these designs, I thought it’d also be fun to explore some of the lore and history of Halloween. It is a day steeped in traditions and has been celebrated by people around the world for centuries, though of course how it is celebrated has evolved over time. The version we know and love in the U.S. today—where children dress up in costumes and go door-to-door begging for candy, also known as trick-or-treating and adults get in on the fun, too, with costume parties and other celebrations—began to emerge in the 20th Century, following a surge in popularity in America in the 19th Century thanks to Irish immigrants.

Known by many names—All Hallows Eve, Hallowtide, All Hallowmas—Halloween originated as the evening before All Saints Day. This is clear when you study the etymology of the word. Halloween comprises two words: hallow, meaning holy person, and e’en, an old fashioned contraction of the word evening or eve for short. The word Halloween was first popularized in 1785 by Scottish poet Robert Burns with his poem of the same name. As for the day’s more morbid connotations, those come from its ties to the Celtic festival of summer’s end, Samhain. According to Celtic mythology, during Samhain the veil between the world of the living and the Otherworld thins, allowing spirits to pass through. It was a time to honor family ancestors and invite them home with an offering of food. Costumes and masks were worn (sound familiar? J) to ward off evil spirits. Irish immigrants carried these traditions with them to the United States.

One such tradition the Irish brought with them to America was that of vegetable carving. Notice how I did not say pumpkin. Turnips were the original vegetable of choice for carving, and are still used in places all over the world today along with gourds. Pumpkins proved to be more abundant though, being native to North America, and their size and softness made them more suitable for carving. Dating as far back as 1837, carved pumpkins were recognized as a herald of the harvest season in America, and of course, the tradition of carving them is alive and well today—not just in America, but all over the world. This 3D printed pumpkin designed in Solid Edge will last for years to come! Check out @oystein_oen on Instagram for more!

You may wonder, what about the name Jack-o’-lantern? Where does this come from? It turns out the story behind the beloved Jack-o’-lantern has its roots in Irish folklore: A tale tells of a man named Stingy Jack known for his tricks and pranks on people. Stingy Jack encounters the devil one day and attempts to trick him into sparing his soul. It backfires and, when Jack eventually dies, he is condemned to wander the Earth with only a coal to light his way, which he places in to a carved out turnip and… The rest, as they say, is history.

Are you surprised to learn the history behind these favorite Halloween traditions? Let us know what your favorite part of Halloween and the fall season is in the comments below! To design your own scary pumpkin, check out this tutorial from a partner on Halloween fun with Solid Edge and Keyshot.

This article first appeared on the Siemens Digital Industries Software blog at https://blogs.sw.siemens.com/solidedge/halloween-fun-with-solid-edge/