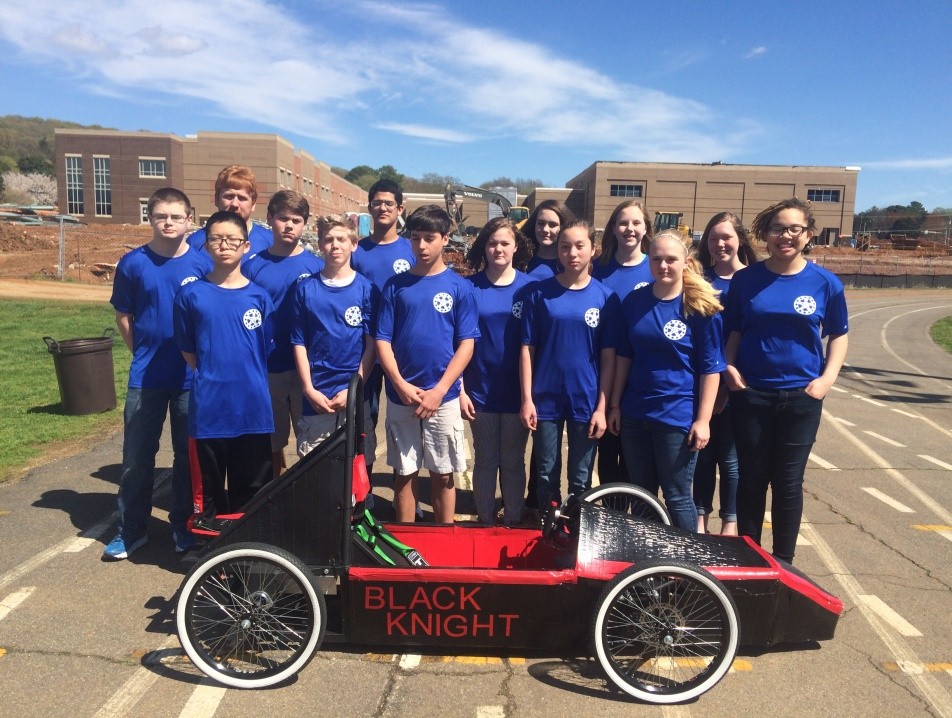 Whitesburg Middle School was one of the first U.S. schools to incorporate Greenpower into their STEM focused curriculum. Greenpower is the international student project that challenges students to design-build-race a single seat electric car. A team of 13 middle school students who took the name Mach 13, was selected to assemble the F24 Greenpower kit car. The enthusiasm for the project was amazing. Over 35 students applied for 13 positions on this team. The objective of this elective class project was to relate STEM subjects to building a car and racing in the April 26th Greenpower Exhibition Race in Huntsville, AL. The students spent much of the school year learning about what it takes to build, test and race and electric car. During a test run, a noise and a bump alerted the driver to stop the car. When the team gathered around to inspect the car they noticed the motor was at an angle and it had pulled from the mount. The teacher challenged the students to figure out how to make the fix without having to order new parts. The concern was if they waited on the part driving practice would be shortened and the team might not be ready for the race. Someone suggested making a bushing and it was agreed that this was the way to go. The students drilled out holes in the mount to match each other. Then they used calipers to measure the diameter of the drilled hole and the diameter of the bolt itself. Students thought to increase size of washers to increase surface area. The existing washers were too small and were applying so much pressure to the mount so the motor separated when engaged. By investigating, students came up with the idea of increasing the size of washers to increase surface area.

The bushing design was very simple. All the students worked on designing it in Solid Edge. They saved the model as an .stl file and sent the local high school where bushing was printed. The 3D printed bushing was added to their car, and there have been no problems with the motor since the modification was made.

These 7th and 8th grade students came up with a simple solution and gained some real world problem solving experience. They got a first-hand look at the design to manufacturing process by modeling and producing a part for their car.

The pay-off for their persistence was a 1st place victory in the 90 minute endurance race. They now have their sights now set on racing in England. Interested in starting a Greenpower team in your community? Visit www.greenpowerusa.net.

STEM education leaders help Siemens prepare a new generation… January 27, 2022 Register now for free to join Stage Two's livestream and the Siemens Digital Experience powered by Scasa on October 29th.…
Problem solving vs. finding answers starts in high school May 24, 2022 Engineering has been a major in universities for centuries, but for as long as humans have been on Earth, we…
Developing tomorrow’s engineers: Siemens partners with ReDI… September 14, 2021 Amid the pandemic, digitalization has become more important than ever. We've come to realize that digital skills have become critical…

This article first appeared on the Siemens Digital Industries Software blog at https://blogs.sw.siemens.com/solidedge/greenpower-puts-students-in-the-driver-seat-with-solid-edge/