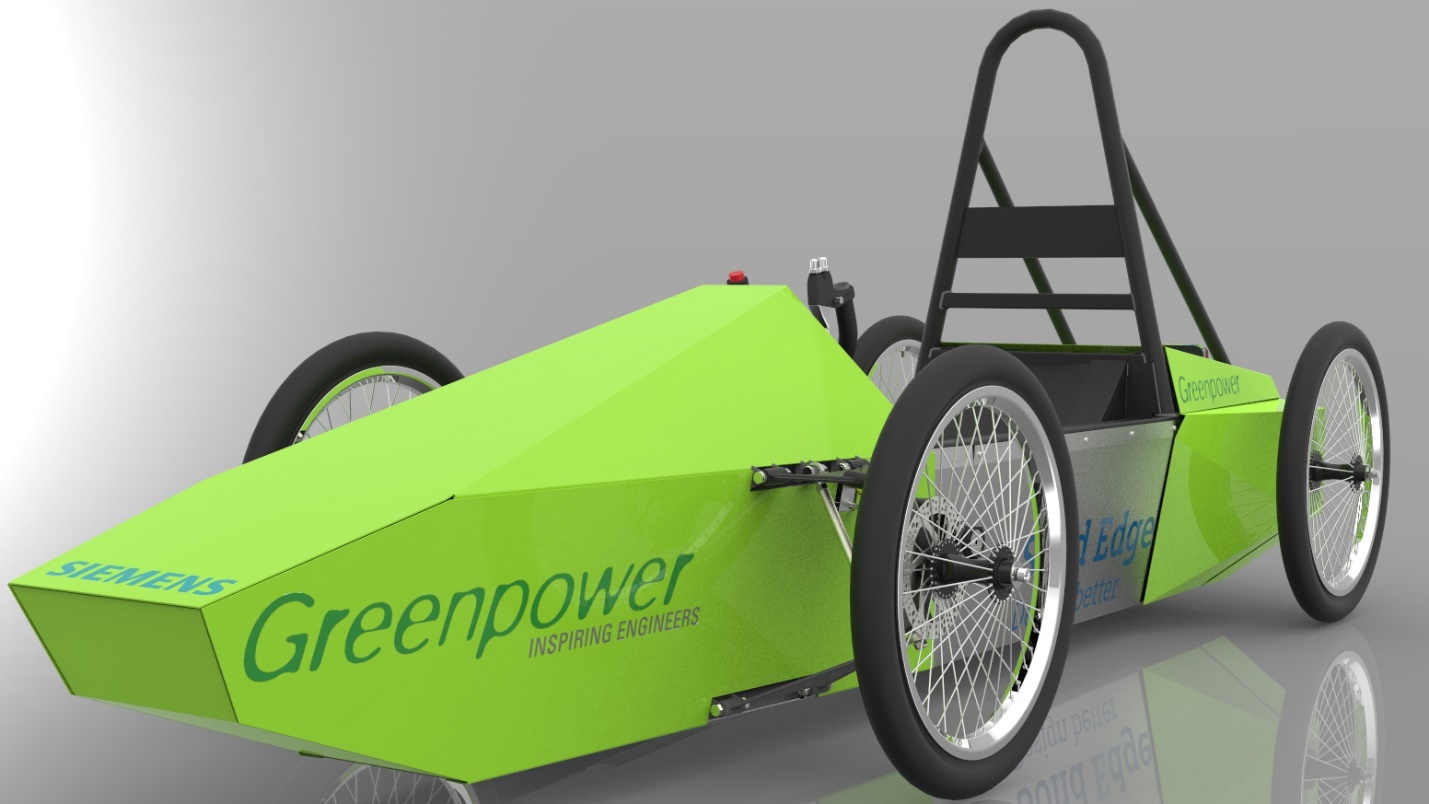 The objective of this project was to develop a low-cost and easy-to-create basic body-kit for the Greenpower Formula 24 kit car.Ideally students would be able to purchase the material themselves and use it to create a functional body for the car. The material proposed for this was Coroplast (corrugated plastic) as it can be purchased from nearly any home improvement store, it’s durable, and can be used to create semi-complex geometries by being folded in a way similar to cardboard and sheet metal.

First I had to find out what size sheets were available to determine how long the sections of body could be. To that end I loaded an assembly in Solid Edge so I could design the rough draft of the body around the assembly of the Greenpower Formula 24 kit car.I used Solid Edge Sheet Metal to create the body, using bends to create contours. Using this method I could create a flat pattern to cut out the pieces from the stock Coroplast. Below you can see the change from bent part to flat pattern. One major difficulty I found using this process is that the dimensions for the actual car did not exactly match those of the assembly. When coupled with my own inexact replication of the flat pattern onto the Coroplast, this resulted in sometimes awkwardly fitting body pieces and I had to be versatile and be able to make adjustments as needed to the parts after I cut them out. Below you can see the results of my first try at this. Unfortunately my first try had a few design flaws and failed to meet some of the safety requirements.I hadn’t found out about the rules of the competition, and so had inadvertently created a body that didn’t follow those rules.Also I didn’t know that the section in front of the back part of the car would remain uncovered, which meant that the back section I designed would catch all the air as the car rolled and significantly increase aerodynamic drag.This time I knew that I needed to design a nose that would firstly not impale anyone who happened to be in front of the car, and also it had to fit a section of foam beneath the nose in case of impact.Also in lowering the back section I would have to find a way to get it on despite the metal bars that block it from lying completely flush. So back to the drawing board I went. Below you can see the results of this iteration of design. It turned out a lot better as far as being compliant with the rules and being functionally appropriate (i.e. no huge air brakes). Here also is a picture of a rendering of the complete cart along with the Green Power logo. Some difficulties I encountered while attaching the various parts of the body:

Sophia Valentine cuts a clear path with a CNC plasma cutter… February 16, 2022 Discover how 20-year-old Sophia Valentine uses self-taught sketching, 2D CAD, sheet metal and welding skills to operate a CNC table…
Problem solving vs. finding answers starts in high school May 24, 2022 Engineering has been a major in universities for centuries, but for as long as humans have been on Earth, we…
Solid Edge Startup Spotlight: Flying through virtual worlds… March 10, 2021 During his time at the MIT Media Lab, Patrik Künzler came up with the idea of developing a chair that…

This article first appeared on the Siemens Digital Industries Software blog at https://blogs.sw.siemens.com/solidedge/greenpower-coroplast-body/