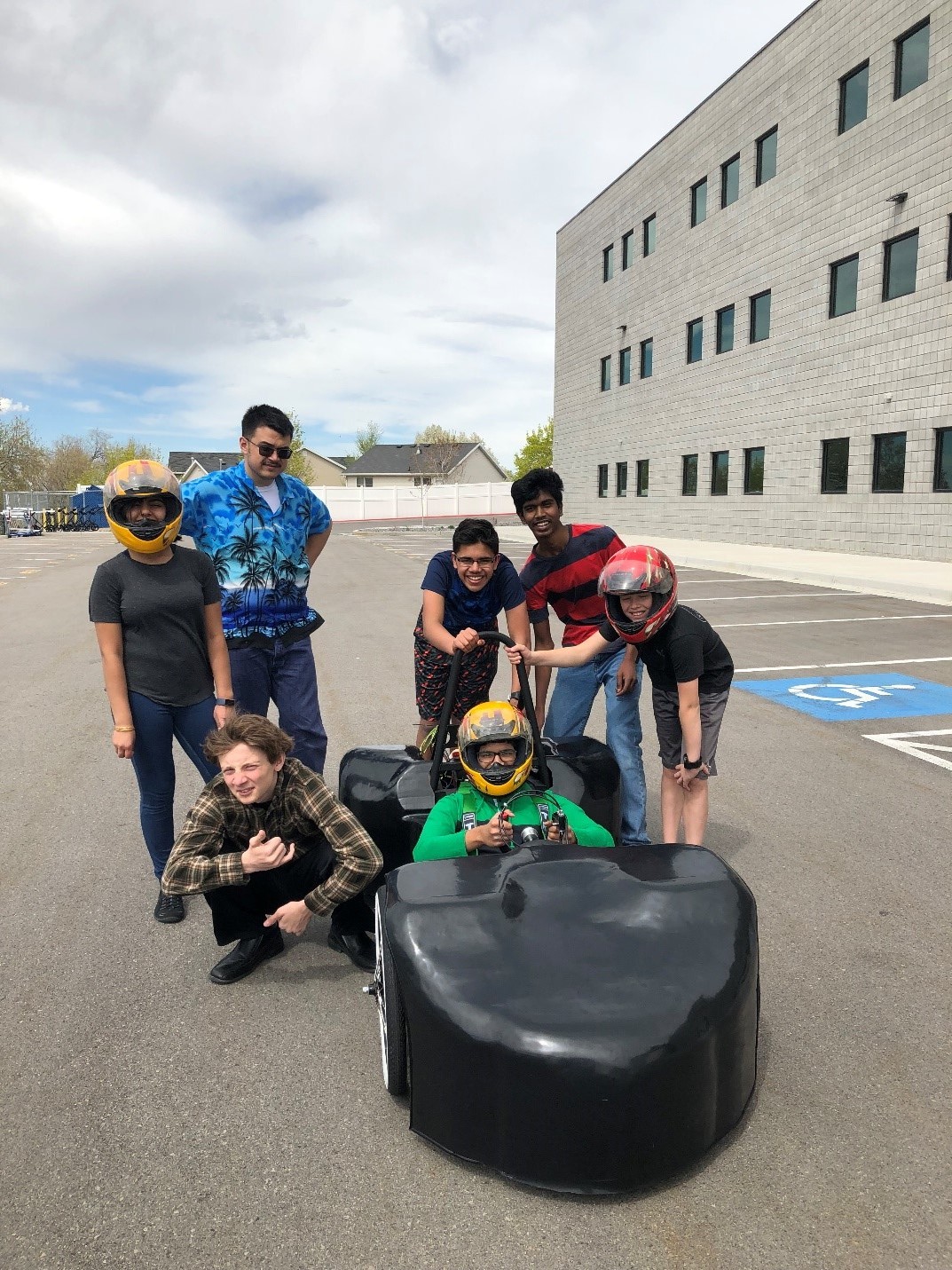 Every year, teams of students around the world design, build and race their own custom-designed electric car as part of events hosted by Greenpower Education Trust. Greenpower advances education in the subjects of sustainable engineering and technology by connecting directly with young people. Greenpower runs engineering challenges for schools based around designing and building a single-seat electric-powered race car. This year’s Greenpower Electric Car Challenge in Utah, an annual event in its fifth year, was hosted by the Governor’s Office of Energy Development (OED) and the Utah State University STARS! GEAR UP program.

The student-led Draper 3 Race Team from American Preparatory Academy (APA) was one of 24 teams from 19 schools in Utah and Nevada represented to race at Utah Motorsports Campus.

The Draper 3 Race Team was formed in late 2018 by a group of five students and their faculty advisor. After contacting faculty at Utah State University about how to get involved in the race, the group was invited to speak with a representative from the Utah Governor’s Office of Energy Development (OED). The students were inspired after their visit, and loved the idea of designing the body of an electric car, assembling the car themselves, and eventually racing it. The team was able to demonstrate enough knowledge, interest, and commitment to the program to have OED award them a Greenpower vehicle frame, motor and batteries (a value of $4500 USD).

Once funded, the team immediately started preparing for the 2019 race by learning how to use Solid Edge 3D Design to design and manufacture the body of their race car.

By the end of the 2018 school year, the Draper 3 Race Team had grown to include more students and another faculty advisor. The design team was formed and led by a student, chosen by his teammates, who stepped into the role of chief engineer and led the team on a trade study that would determine several important design choices:

The team needed to be able to create a car body that would be an exact replica of the software design. This would allow them to conceptualize and test a digital design using Solid Edge. The challenge was, they didn’t have access to a manufacturing facility, so they had to come up with creative ways to manufacture the physical versions of the car body.

The team researched a variety of manufacturing processes and materials, which included all of the following:

The students put together a trade matrix and discussed the pros and cons of each of the processes.

Then, the team contacted Magic Vac, a local vacuum molding facility, to learn more about their process and to see if they could help the team achieve their primary goal. The facility was not only excited to learn about the project, but had experience building small car bodies for a local car manufacturer. Magic Vac agreed to donate their facility to produce the car body. In order for Magic Vac to create the body, however, they needed a mold of the CAD representation from the APA design team.

Magic Vac recommended a stacked MDF mold smoothed with Bondo – so the team searched for a way to CNC the body from MDF. The owners of 4×4 Bodies had a large CNC machine and donated their time and machine. The team got a sponsor, Redwood Veterinary Hospital, to provide funding to rent tools and materials to build the mold.

The team used Solid Edge to create a model of the initial design that was about 1.5 inches thick and sliced into a little over 300 pieces. The primary slicing was done in the horizontal direction for mold stability. To minimize material cost, the sliced parts were placed onto approximately 10 sheets of MDF. Thereafter, GCODE for the CNC machine was produced. The team, armed with router bits, arrived at 4×4 Bodies on a Saturday to proceeded with the long process of cutting the sheets into individual parts.

The parts were transported back to APA – and the process of building the mold began. The individual parts were glued and screwed together, layer by layer, to form the primary mold. Smoothing the mold was the final step. The process began with filing and grinding, followed by filling in the gaps in the mold with Bondo.

Finally, the students sanded the mold with belt and finishing sanders. Once complete, the finished mold was then loaded onto a trailer and transported over to Magic Vac.

Magic Vac purchased the ABS plastic, mounted the mold for vacuum forming, and generously produced three bodies for the team. The plastic was trimmed using a small circular saw and a Dremel tool. The students were excited to learn that the body fit the car perfectly – and looked identical to the CAD representation of the design. A job well done.

“The original intent was to use the first body to practice cutting and trimming. However, the process turned out to be quite easy and relatively error-free,” says the Draper 3 design team. “We opted to keep our prototype as the final body. Black plastic trim was something we added afterwards to give the car a finishing touch, but that’s all we needed.”

Draper 3 on the Track

The race was based on how many laps each team could complete in 90 minute intervals. The official results of the race placed the Draper 3 Race Team in 7th place of 24 total electric cars that hit the track that day.

“We learned so much about the engineering process, and were able to build a wonderful electric car. We persevered through what seemed like dead ends, and through determination made our process come to life with the help of Solid Edge. This was an awesome project,” said the Draper 3 team when we asked them about how they felt after the race.

We’re proud of their result. And we’re excited to see what’s next for the Draper 3 Race Team and future students at American Preparatory Academy who choose to learn and race with Solid Edge.

Solid Edge for Students: At a Glance

With Solid Edge, students have access to a free version of the same easy-to-use software suite used by professionals. In addition to free software, we provide tutorials, webinars, online courses and certification to help you develop your design and engineering knowledge and skills. Learners of all ages can gain valuable experience with industry-leading technology, supporting studies in STEM subjects at all levels of education, from elementary school through university.

As the title sponsor of the Greenpower program and curriculum, Siemens is proud to support Greenpower and provides Solid Edge software to participating schools and students ages 9-25 at no cost.

STEM education leaders help Siemens prepare a new generation… January 27, 2022 Register now for free to join Stage Two's livestream and the Siemens Digital Experience powered by Scasa on October 29th.…
Sophia Valentine cuts a clear path with a CNC plasma cutter… February 16, 2022 Discover how 20-year-old Sophia Valentine uses self-taught sketching, 2D CAD, sheet metal and welding skills to operate a CNC table…
Problem solving vs. finding answers starts in high school May 24, 2022 Engineering has been a major in universities for centuries, but for as long as humans have been on Earth, we…

This article first appeared on the Siemens Digital Industries Software blog at https://blogs.sw.siemens.com/solidedge/apa-students-build-electric-car-with-solid-edge/