LED based lighting is now a very hot topic (believe me, in electronic thermal management circles that used to be funny, the first few times). Control of packaged IC junction temperatures will always have a bearing on reliability but for LEDs thermal also effects functional performance in terms of brightness and colour. The hotter they get, the dimmer they appear. A particular contradiction in the context of incandescent forms of lighting where the opposite is true. Whereas there are warranty and brand recognition concerns about LEDs not working there are equivalent concerns about them working badly. Yet more motivation to consider their thermal performance through the design process.

Candles have been around for about 2400 years and provided the main source of lighting in England from about 400AD (when oil lamps disappeared with the Romans) until the early 19th century when gas lighting took over. Candles aren’t complicated, they also aren’t very efficient, less than 1% of the energy they use is converted to light. The rest is spent on heating. Incandescent light bulbs, made successful but not invented, by Thomas Edison come out at about 5% efficient. LEDs that were effective enough for commercial application were developed by Nick Holonyak Jr., while working at General Electric Company in 1962. Their brightness has been much enhanced since and now commonly have efficiencies between 20 and 40%. A good energy efficient trend but boy do LEDs exhibit a high heat flux. The designed removal of that heat will ensure their temperatures remain acceptably low and thus their lifetime, brightness and colour meet customer expectations. 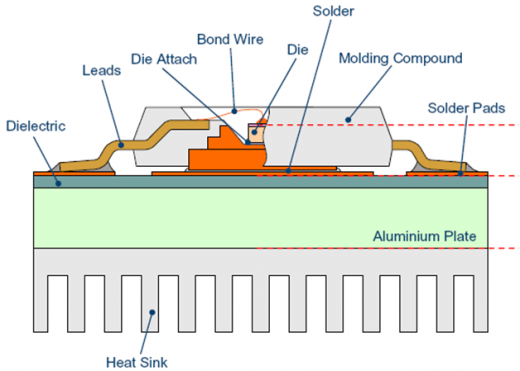 What issues are faced when thermally engineering a luminaire? Commonly the biggest thermal bottlenecks are found in the die attach and thermal interface between package and heatsink. The materials in the rest of the constructions through which the heat flows have relatively high thermal conductivities.

Passive heatsinking will be employed for domestic LED luminaires, without the use of fans much attention is spent on designing an effective heatsink for the given space it is to be squeezed into. Fin geometry will be dictated by the envelope, number and distribution of fins would be optimised through simulation. Too few fins and their area extending benefits are lost. Too many fins and cool air finds it so difficult to pass between the fins that it will decide not to.

Thermal simulation is now such an inherent part in the design of this and other electronic products that the provision of thermal metric data by the supplier is common place and expected. Some metric data will be used for comparison purposes only, other data will be expected to be used accurately in simulation. Such data normally exists in the form of thermal resistances, K/W (degC/W). That is the temperature rise of the package for a given power dissipation. That’s to say the power that is dissipated not as light. How would you measure that? Why, you’d need some kind of optical integrating sphere.. ta da! Picture on the left is a product called TERALED available in conjunction with the T3Ster measurement system that will measure both thermal and optical properties of the DUT (device under test).

Best to end it here before I do actually grow a BMW and turn into a salesman (though as our esteemed general manager says, we are -all- in sales). More information about how our products are well suited to the lighting industry can be found here.

Here’s wishing everyone a bright, colourful and successful 2012!

This article first appeared on the Siemens Digital Industries Software blog at https://blogs.sw.siemens.com/simulating-the-real-world/2012/01/03/leds-the-futures-bright-and-hot/