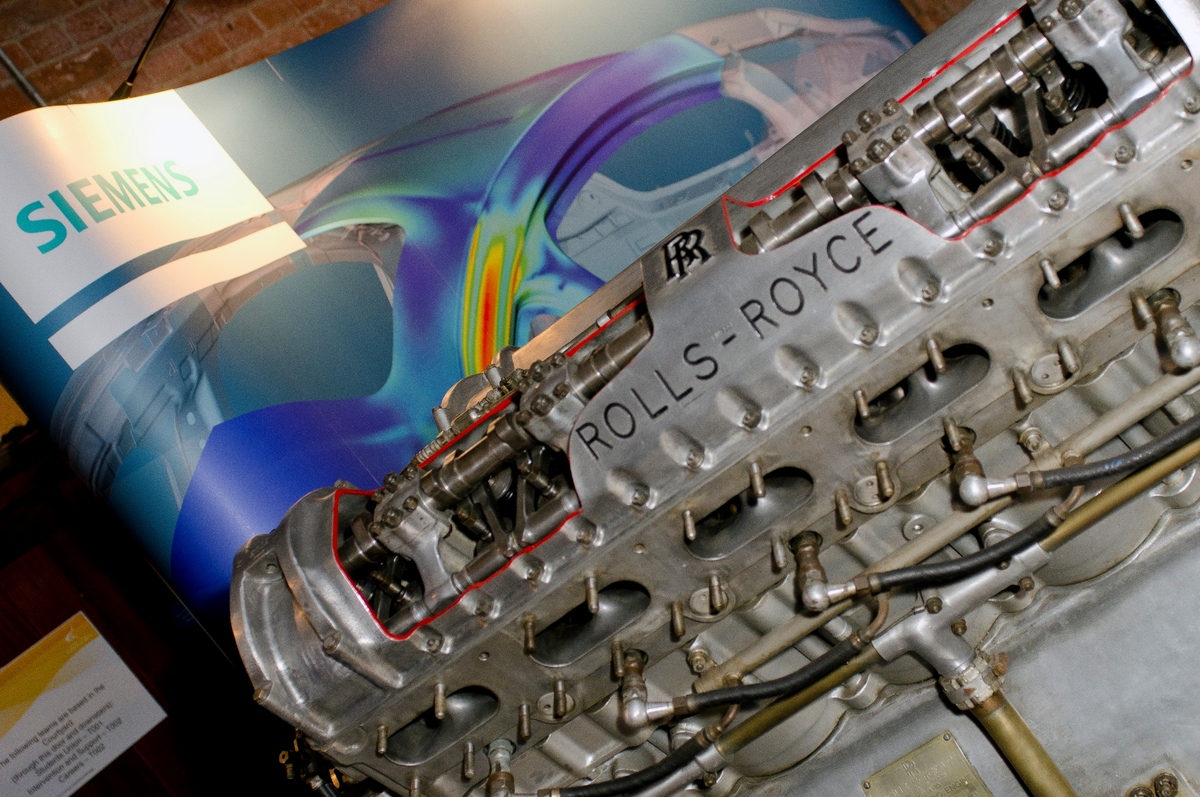 The 2014 Simulation Engineering Show at the Derby Roundhouse brought together some of the largest engineering businesses in the UK.

Siemens PLM UK was pleased to be a Gold Sponsor of the event, and to display a fantastic 37 litre (2,260 cu in) Rolls-Royce Griffon engine, on loan from the Rolls-Royce Heritage Trust. The Griffon was the last in the line of V-12 aero engines produced by Rolls-Royce.

The Griffon engine was a higher-output engine option fitted to the infamous Supermarine Spitfire fighter plane, the backbone of the Royal Air Force Fighter Command during World War II.

Nearly 75 years later, graduate apprentices at Rolls-Royce are working on an exciting project to remanufacture components for the Griffon. Since there are no complete drawings to work from, the newly hired engineers are taking scans from the original engine components and using these to re-model the parts in NX to create high-quality reference models.

As well as being used for computer-aided manufacturing (CAM), the CAD models are also being used to virtually simulate the engine in operation. The project aims to help familiarize graduate apprentices with the NX software Rolls-Royce uses in the context of real engineering scenarios.

The Rolls-Royce Heritage Trust generously lent Siemens PLM the Griffon engine to showcase at the UK Simulation Engineering Show an example of great accomplishment in engineering.

The Heritage Trust promotes and preserves the history of engineering excellence in Rolls-Royce. Siemens PLM thanks them for their dedication and generosity.

You can see photos from the 2013 UK Engineering Simulation Show here!

4 Myths about AI in CFD April 6, 2021 As Artificial Intelligence (AI) has become more ubiquitous in our everyday lives, so too has confusion about what it is…
Is e-bike noise an issue? Quit whining! June 2, 2021 E-bikes become quite popular these days. Besides the operating range, also the generated noise is an important quality aspect for…
If you can’t take the heat… Simulate it! Reducing VTM costs… June 10, 2021 Find out how to efficiently and accurately simulate VTM using Simcenter Engineering's multi-fidelity workflows.
This article first appeared on the Siemens Digital Industries Software blog at https://blogs.sw.siemens.com/simcenter/world-war-ii-fighter-plane-helps-apprentice-engineers-at-rolls-royce-learn-the-latest-techniques/