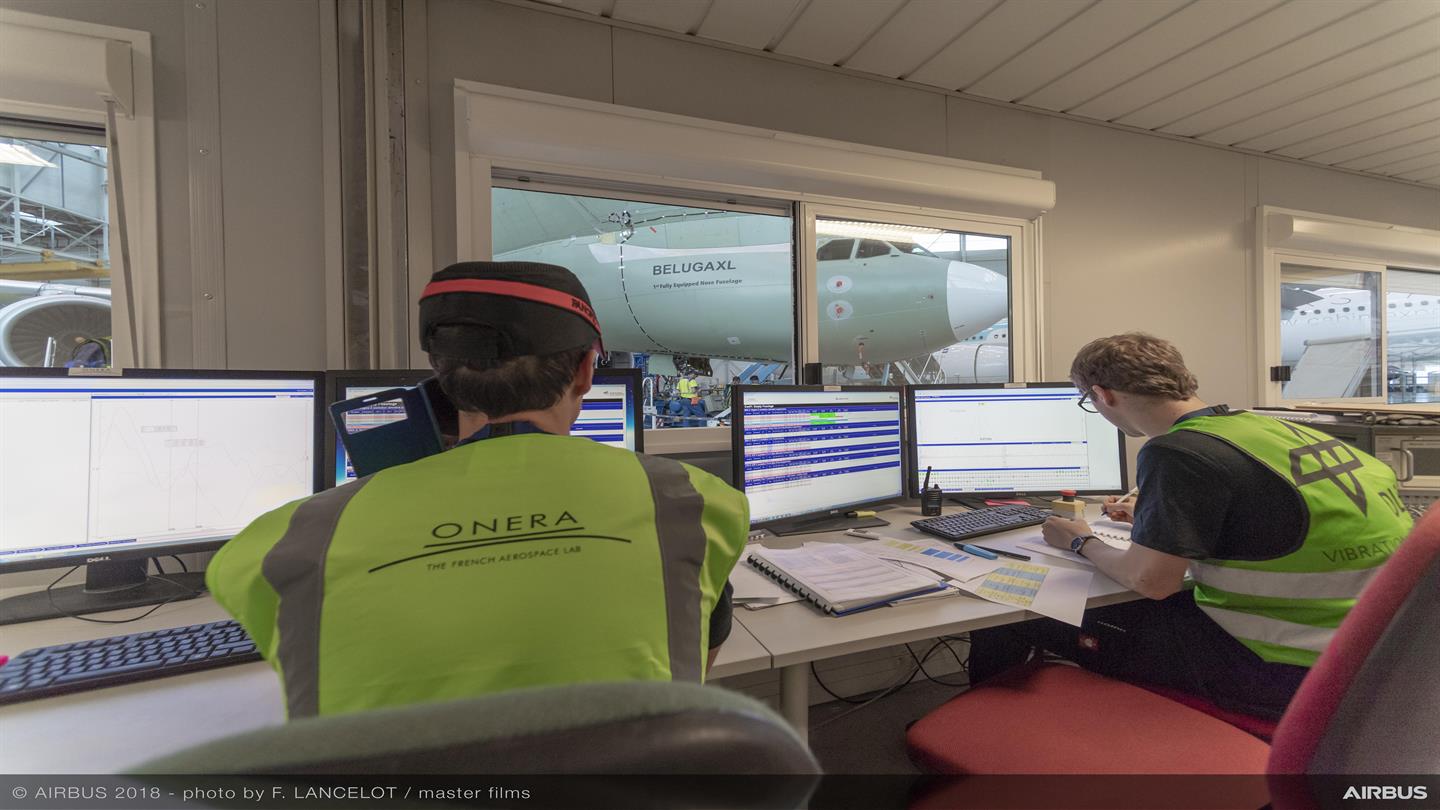 On June 7, 2018, Airbus announced the successful completion of the ground vibration test of the BelugaXL next-generation oversize cargo airlifter. That’s the kind of success story we love. Even if you’re not an aviation expert, you will be fascinated by the sight of the giant structure, its long fins and large turbines that quiver under the loading from the shakers.

Watch below the video realized by Airbus during the ground vibration test:

The hard facts speak for themselves: 80-kilogram shakers were used to excite the airplane on 30 different locations. More than 600 sensors, 7000 meters of cable and 300 meters of optical fibers were installed on the fuselage, empennage, engines, and wings.

The test itself lasted only 8 days.

Being a novice in the field, I asked Simcenter expert Raphael Hallez to share his views on this success and give us some keys to a highly effective ground vibration test (GVT):

“I perceive the good team collaboration between Airbus, DLR, and ONERA as the first positive element in this successful test campaign,” says Hallez. “It is clear that the joined expertise from companies like DLR and ONERA contribute to the smooth execution of a large project like this complex GVT.”

“Second, I’ll mention the modularity and reliability of the systems employed to acquire the numerous datasets. DLR and ONERA had the possibility to assemble multiple single data acquisition systems into one very high channel-count system with 600+ acquisition channels, all perfectly synchronized. That’s an impressive setup and performance!”

“Last, I admire the great productivity of the team on-site: the tailor-made GVT acquisition and processing system has allowed identifying all critical resonant modes of the aircraft in a very limited time (8 days).”

How do you perform critical ground vibration tests on time, efficiently and reliably to support aircraft certification?

Join us at our on-demand webinar and learn how to roll-out an integrated approach to GVT. The webinar is hosted by Raphael Hallez with the collaboration of Mr. Arne Vollan from Aerofem GmbH. During this weinar, we will share the results of ground vibration tests performed on some light commercial aircraft and on the solar impulse aircraft among others.

Surfboard CFD - Riding the Digital Wave July 29, 2022 The flip-flop engineering symposium Monday, December 9, 2019, 7 pm. Sunset Beach Elementary School Cafeteria, Oahu's North Shore, Hawaii. Two…
4 Myths about AI in CFD April 6, 2021 As Artificial Intelligence (AI) has become more ubiquitous in our everyday lives, so too has confusion about what it is…
10 insights from rocket CFD for a mind-blowing moonshot July 29, 2021 This is your guide to a successful moonshot project - with 10 insights that only rocket CFD (Computational Fluid Dynamics)…
This article first appeared on the Siemens Digital Industries Software blog at https://blogs.sw.siemens.com/simcenter/the-keys-to-a-successful-ground-vibration-test-congratulations-airbus/