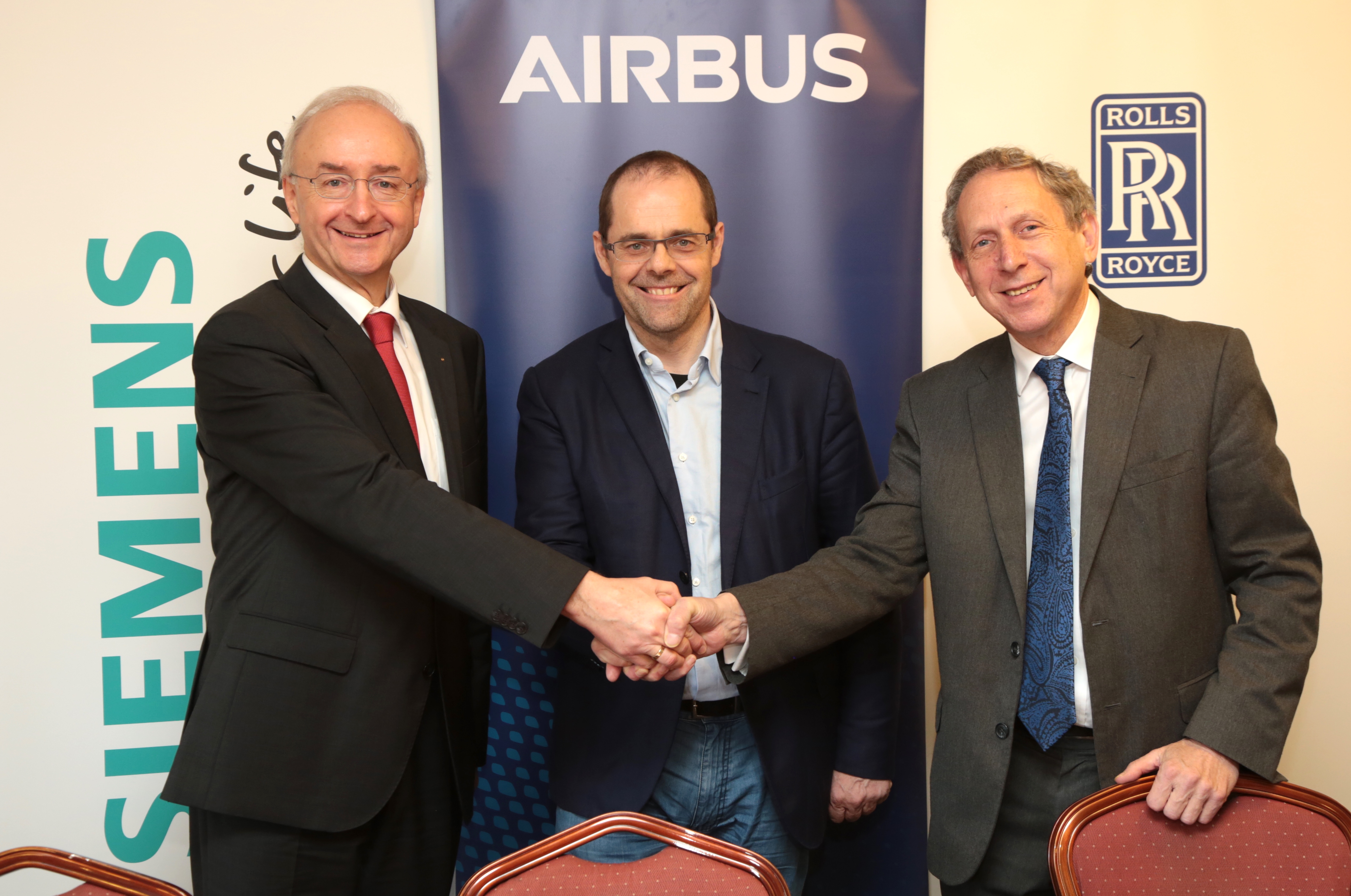 Pretty much everyone in the aviation industry knows that planes need to get quieter, more efficient and less reliant on fossil fuels. But how do you do this when the current concept really hasn’t been updated since, well honestly, the Boeing 707 in the late 1950s. Clearly, this calls for a bit of disruptive innovation, which seems to be happening as we speak.

Expected to fly in 2020, the E-Fan X, co-developed by Airbus, Rolls-Royce and Siemens, is actually a flying test plane (or demonstrator as industry experts like to say) designed to prove the technical feasibility of hybrid-electric propulsion applied to a 100-seat passenger plane. Right now, the plan is to use a 100-seat BAe 146, a British short-haul jet. The first step will be to replace one of the BAe 146’s four gas turbine engines by a two-megawatt electric motor from Siemens.

As you can guess, this is not the first time that Siemens has worked in this area. Quite a few innovation breakthroughs were made the past two years with the record-breaking Extra 330LE, equipped with a Siemens eAircraft propulsion system. Weighing in around 1000 kilograms, the Extra 330LE holds a world record for ascent, a top speed record of 337.50 km/h, and the privilege of being the first electric aircraft to tow a glider into the sky. Pushing the drivetrain technology to the limit

Not only is the Extra 330LE a record-breaker, the electric drive system is world-recorder holder as well, holding the title for power/weight ratio in its class with a continuous power output of 260 kilowatts. Weighing only 50 kilograms, this is an unprecedented power-to-weight ratio. Working from this world-record drive system, Siemens plans to develop a two-megawatt electric propulsion system for the BAe 146 regional aircraft. The system needs to be about eight times more powerful than the system that currently drives the Extra 330LE.

The idea would be that the final E-Fan X would have four to eight motors on its wings that would drive the aircraft’s propellers or fans. In the first flying demonstrator, the electric propulsion system will get its power from a generator that will be powered by a turbine in the fuselage. Take-off and climbing will happen with the help of 700 kilowatt lithium-ion batteries. From a tech perspective, the E-Fan X is a big deal, but there is quite a bit of work to be done. Even though electric propulsion will take care of a huge part of the noise pollution issue, all these engines and batteries will still take up a lot of weight. Even with all the technology advancements like advanced lightweight engineering and high-tech materials, the final E-Fan X needs to be lean-and-mean to succeed. Throw in the 2020 first flight into the development cycle and you can see how things can get rather tricky.

So when will we e-fly?

When we interviewed Dr. Anton and Dr. Leuridan last July at the Paris Air Show and asked them when we would all be flying hybrid-electric, I had my doubts that we would be flying Paris-Nuremberg in a 50-seater hybrid-electric aircraft in a matter of years.

Record-breaking disruptive innovation and hyper-lean product development cycles aside, it just didn’t seem possible that a hybrid-electric commercial aircraft would happen this quickly. Look at how long it took the electric automobile market to take off. But today, technology is better, materials are becoming more advanced and development cycles are faster, but is this enough?

The Secret is Simcenter

According to the head of eAircraft at Siemens, Dr. Frank Anton, the secret recipe is not materials or topology, “The kinds of extremely light propulsion systems we are talking about can be developed and built only thanks to Simcenter, a Siemens PLM simulation suite software that takes all known physical and technical effects into account. Using this technology, we iteratively build digital twins and thus virtually optimize our prototypes. This not only accelerates development, but also results in more powerful machines.” Well, thanks to Simcenter, it seems that I have happily been proven wrong. With 2018 right around the corner, development of the E-Fan X demonstrator is already underway. And these three companies have a serious road map. Airbus is earmarked for the overall integration as well as the control architecture of the hybrid-electric propulsion system and batteries, and its integration with flight controls. Rolls-Royce will be responsible for the turbo-shaft engine, two megawatt generator, and power electronics. Along with Airbus, Rolls-Royce will also work on the fan adaptation to the existing nacelle and the Siemens electric motor. And Siemens will deliver the two megawatt electric motors and their power electronic control unit, as well as the inverter, DC/DC converter, and power distribution system. This comes on top of the E-Aircraft Systems House collaboration between Airbus and Siemens, launched in 2016, which aims at development and maturation of various electric propulsion system components and their terrestrial demonstration across various power classes.

So in a nutshell?

The E-Fan X looks like a serious test plane capable of answering some of the current e-aviation challenges. I think I am going to change my mind. I think we will all be flying hybrid-electric in our lifetimes as well. And sooner than we all think.

Making history with the Siemens eAircraft project at Le Bourget

4 Myths about AI in CFD April 6, 2021 As Artificial Intelligence (AI) has become more ubiquitous in our everyday lives, so too has confusion about what it is…
10 insights from rocket CFD for a mind-blowing moonshot July 29, 2021 This is your guide to a successful moonshot project - with 10 insights that only rocket CFD (Computational Fluid Dynamics)…
Model-based design from ICEs to ICUs: Bridging the… November 10, 2021 The events of the past few years have turned global attention towards health and, more specifically, healthcare. From the images…
This article first appeared on the Siemens Digital Industries Software blog at https://blogs.sw.siemens.com/simcenter/the-e-fan-x-e-aviation-is-about-to-happen-and-sooner-than-you-think/