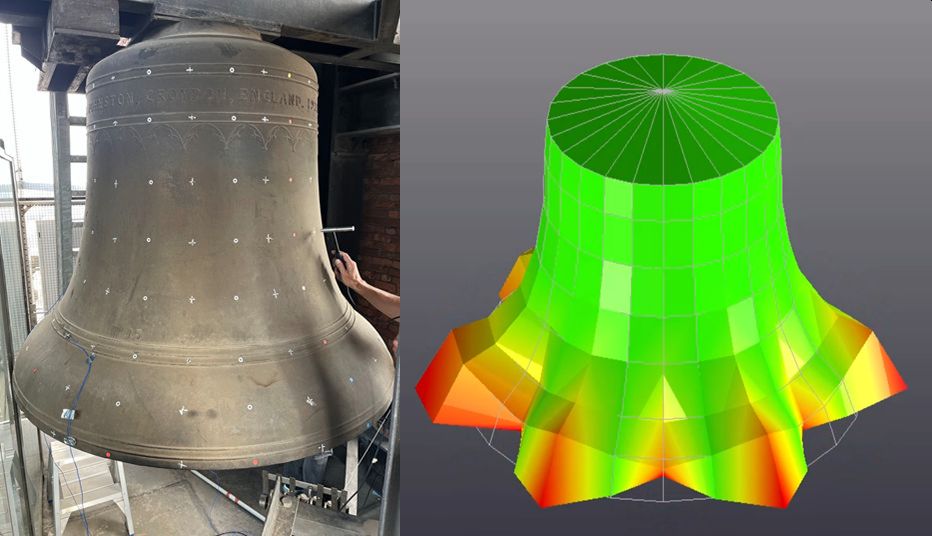 Any idea what tower bells have in common with Siemens? There are at least 3 links, so please keep reading to discover all of them.

An obvious one to start with: when a bell rings, it vibrates and produces sounds. This is exactly what we do with our Simcenter solutions: measure and simulate sound and vibrations.

But my favorite link is the fact that Siemens co-sponsored the Peace Carillon close by the Leuven office.

A carillon is a musical instrument, consisting of tuned bells in different sizes. It is played via a central baton-type keyboard. The bells are often located high up in the church or abbey tower, so that people in the city can enjoy the music played. If you have not been to Belgium or the Netherlands, chances are big that you have never seen or heard a carillon.

OK, but what is a peace carillon?

Close to the Leuven office of Siemens, there is the beautiful Park Abbey. It is one of the best preserved abbey sites in Western Europe.

In 2018, the construction of a new carillon started, consisting of 40 newly cast bells. This carillon is an exact replica of the original one that was destroyed in a fire during the First World War. 100 years after they faced each other as enemies, the city of Neuss in Germany and the city of Leuven decided to recreate the carillon. Doing so, they “connect through culture what was once separated by fire”. Hence the name Peace Carillon. It symbolically played the first time on November 11 2018. This is exactly 100 years after the end of the First World War.

The investment of 500.000 euro was partly possible thanks to crowdfunding and sponsors. As a good neighbor, also Siemens (Industry Software NV) and Jan Leuridan (formal CTO/CEO at LMS International and Siemens Industry Software) sponsored a total of 4 bells.

So there is my 3rd link: “Siemens awakening sounds and vibrations from Leuven” as mentioned on one of the sponsored bells.

Sound and vibrations of carillon bells

As an engineer living in the shadow of the abbey, I could not resist taking it one step further.

So here is the last link: I decided to measure the sound and vibration patterns of the carillon bells.

Using the Simcenter SCADAS XS and the binaural headset, I first measured the acoustic frequencies at ground level.

As expected, those bells create a spectrum with very distinct frequencies. Traditional instruments (like strings on a guitar or an organ pipe) produce a sound spectrum based on harmonics. However, a bell is much more complex. Its typical curved shape and varying thickness generates different overtones, which are not always a multiple of the base frequency. A bell-founder can create the specific “timbre” of a bell by tuning the combination of base tones and (non-harmonic) overtones.

Our goal was to decompose this complex deformation and visualize how the bell deforms at each of the distinct frequencies. This is the process of modal analysis. We artificially excite the bell by use of an impact hammer, and measure the vibration response at the surface of the bell.

Due to practical reasons and better accessibility of the bells, we moved to another carillon. Luckily Leuven has many of them. We decided to climb the 289 steps of the Library tower in the center of the city!

Climbing up the tower and hitting the bell

Climbing up the stairs to reach the bells is a challenge by its own. Needless to say I was happy that I did not have to carry any heavy measurement equipment with me. The pocket size Simcenter SCADAS XS is perfectly fit for this job. As a true sound and vibration analyzer, it can handle both the acoustic tests as well as the vibration tests. Once up there, we selected one of the bells: with a diameter of 1.6m and a weight of about 2.5 tons not even the biggest one!

In order to visualize the distinct vibration patterns or mode shapes, we performed an impact test in combination with our Simcenter modal analysis solution. To get accurate results up to 1200Hz, we measured at 7 different heights and on every 15 degrees over the total circumference – a total of 168 measurement locations.

Instead of using 168 accelerometers to measure the responses, we used the roving hammer method. Placing 4 reference accelerometers spread over the surface, we now “only” had to hit the bell with the hammer on 168 locations.

For each location we took 3 averages. As the decay of the bell is quite long, we had to wait 10 seconds between each hit. Features like automatic overload and double hit detection and audio feedback to go to the next measurement point, made our task easier and allows for a one-man operation. All in all, it took us a full afternoon to do the modal impact test.

Vibration patterns of the bell

Right after hitting for the 504th time, the Simcenter modal analysis processes the complete set of frequency response functions (FRF’s). In a matter of seconds, the individual mode shapes show up, still high up in the tower. As beautiful as the astonishing view over the city of Leuven was, also the mode shapes look amazing (hey, we are still engineers 😊).

A lot of mode shapes show up, along with their resonant frequency and damping value. Visualizing the mode shape is easy – simply click the mode shape from the list and the animation automatically starts.

Some more results below, linking the individual mode shapes to the corresponding frequency in the binaural audio recording. Notice that not all of the vibration patterns create a peak in the acoustic spectrum. This means the bell vibrates but is not generating any sound at this frequency.

The mode shapes can also be described with a combination of Roman and Arabic numbers. I-3 corresponds to a mode shape with 1 maximum in the vertical direction and 3 maxima in the circular direction. In our bell example, this mode shape appears at 309Hz.

The frequency can also be described with its music annotation, where 128Hz corresponds to a “c”, the harmonics at 256Hz is “c1”, the double octave at 512Hz is “c2” etc. This gives the following table for the bell we measured.

There is much more magic in the tones of bells. The way we interpret the tones with our human brain can be different than those measured. The so called “strike tone” is a combination (in our brain) of 3 main vibration patterns and corresponding tones: the octave, the twelfth (double quint) and the double octave.

All this would lead us too far in this blog, but in case you want to learn more about it, just know that there is a Royal carillon school in Mechelen in Belgium. This school exists since 1922 and is the first, oldest and largest of its kind worldwide. Students from all over the world can attend “campanology” courses. Luc Rombouts teaches there and combines this with his job as official city carillonneur of Tienen, university carillonneur of Leuven and carillonneur of Park Abbey.

I would like to end with a big thank you to Luc for giving us access to the towers and carillon and for sharing his musical experience with us. It was a real pleasure to see how music and our Siemens engineering background nicely come together. Another great example of the usage of the Simcenter SCADAS XS for combined noise and vibration measurements.

Want to see other examples of how handy this pocket-size measurement instrument is? Checkout some other blogposts on e-bikes and snowboard.

Interested in other applications related to music? Read the following article on an Italian violin builder or see how we did sound source localization on a classical orchestra.

This article first appeared on the Siemens Digital Industries Software blog at https://blogs.sw.siemens.com/simcenter/sound-and-vibration-of-carillon-bells/