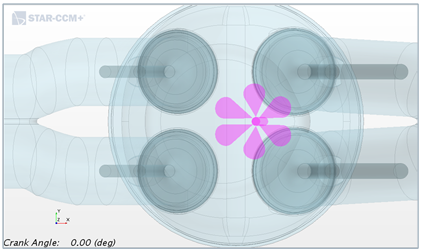 I hope, if you’ve read my previous blogs, you understand the importance of in-cylinder simulation as the Internal Combustion Engine (ICE) isn’t going away any time soon.  Estimates indicate that the ICE will be a critical part of automotive powertrains for decades to come (up to 65% of all new vehicles sold as far out as 2040!) And during the transition to alternative powertrain solutions, simulation is critical to address the new challenges of engine down-sizing, integration into hybrid powertrain platforms, and new combustion technologies (HCCI, variable compression ratio, turbulent jet ignition…I could go on for hours here, but let’s leave that for another blog).

So that brings us back to the Siemens transition of our in-cylinder simulation platform from the long time technology leader, STAR-CD/es-ice/DARS to Simcenter STAR-CCM+.  At the end of 2017 we launched the STAR-ICE add-on for setting up in-cylinder simulations within Simcenter STAR-CCM+, starting with the setup of “Cold Flow” simulations that model the induction of fresh charge and simulate the bulk flow (swirl, tumble) and evolution of turbulence.  With the v13.04 release, STAR-ICE takes a BIG step forward with the ability to setup “Charge Motion” simulations, which include the injection of liquid fuel and simulation of the ensuing mixing process.

While the ultimate in-cylinder simulation also accounts for combustion, emissions, and knock physics, charge motion is an important step forward as it’s still, comparably, far less expensive to run than a full combustion simulation and provides great insight into the design of the combustion system.  There are OEMs around the world that run minimal combustion simulations but employ charge motion simulation extensively, using databases established over the last few decades from simulation data which allow them to make important design decisions based solely upon the quality of fuel/air mixing and the evolution of turbulence in critical regions, such as around the spark plug during ignition timing.

In keeping with the intent of STAR-ICE, the setup of charge motion simulations is meant to be quick and easy, so we’ve brought together numerous features which allow the engineer to spend less time in setup (dragging the mouse for miles and clicking buttons over and over again) and spend more time in value-added engineering, assessing results and making important design decisions. And there are numerous other features in this release intended to help customers making the transition from STAR-CD to Simcenter STAR-CCM+ as well, such as simulation diagnostic and confirmation outputs.  These help the user better understand the simulation process within STAR-ICE and ensure that they’re getting the desired behavior out of the software.  For example, want to know when the simulation is re-mapping?  Take a look at the cell count plot that is automatically created.  Not only do we see max. and min. cell counts over the course of the simulation, we can see the discontinuities that represent the re-map points. And, critical to any transition of simulation platform, want to know how fast your simulation is running?  We’ve got you covered with automatic creation of CPU and Elapsed Time reports.

Of course, with the powerful platform that is Simcenter STAR-CCM+, you can now run design exploration using Design Manager and STAR Innovate all within one software to look at things like injector placement, nozzle targeting, and injection control strategy!

Now, there’s still a lot more to come.  We’ve got lots of developments in the works, including setup of combustion and emissions, performance improvements, and more.  Keep for your eyes out for future releases with more exciting capabilities.  But surely the v13.04 release of Simcenter STAR-CCM+ represents the next big step and, rest assured, we’ll keep charging forward with STAR-ICE!

4 Myths about AI in CFD April 6, 2021 As Artificial Intelligence (AI) has become more ubiquitous in our everyday lives, so too has confusion about what it is…
Simcenter™ FLOEFD™ 2021.1: What’s New? April 29, 2021 What's New in the latest Simcenter FLOEFD 2021.1 version? Electromagnetics, structural simulation and much more. Find out for yourself.
Veering Off Course: Transportation Emissions & The Climate… January 11, 2022 Can significant parts of transport be decarbonized with existing technology? What are the barriers?
This article first appeared on the Siemens Digital Industries Software blog at https://blogs.sw.siemens.com/simcenter/simcenter-star-ccm-v13-04-charging-forward-with-star-ice/