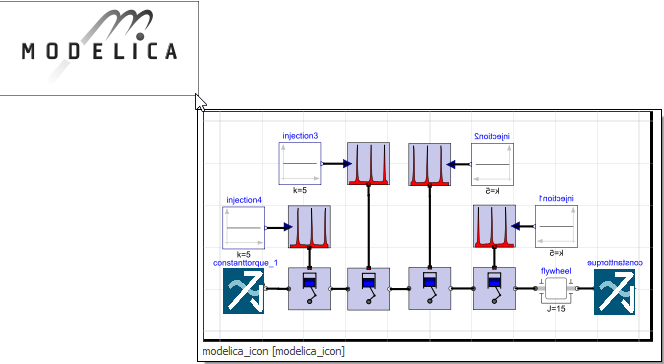 A few months ago, we announced the integration of Modelica in Simcenter Amesim. Today, I would like to go through the process step by step with my friend John Smith who came across a typical use case. Read the whole story just below! That fits perfectly my needs! Moreover, I will take benefits of Simcenter Amesim advanced tools, such as the new Signal Bus feature to easily create complex signals. Let’s have a try. First, I need to figure out what the Simcenter Amesim Modelica platform is.

Simcenter Amesim Modelica platform is designed as an integrated development environment (IDE) for Modelica authoring and allows to:

I guess my PhD student’s models could need to be modified. I’ll do that later. Let’s import them first.

For that, just go to the Tools tab in Simcenter Amesim and click on Modelica Editor. The Modelica Editor enables me to load the last version of Modelica Standard Library (MSL) and create my own Modelica models. It is also possible to import my own libraries based on the MSL. The Modelica Editor graphical user interface is presented below. What is the typical workflow to deal with a Modelica model?

When we want to use a Modelica component or architecture, we have only to right-click on the model in the library tree and select Add to active Simcenter Amesim model. I can add my newly created Modelica model to the Simcenter Amesim system just with a right click. Let’s connect it… and that’s it! My Simcenter Amesim model is finished. Let’s go to the simulation mode to test it, everything looks good. Let’s run design of experiments study and post-process my results. It seems that I need to change some parameters in the Modelica component. Thankfully, I can simply use the standard parameters view as any other Simcenter Amesim component instead of modifying the Modelica code. Good point!

As I can connect both two worlds using a dedicated Modelica Connector set, it seems perfect to make both technologies work together!

Check out this video to see this feature in action:

If you have any questions, please contact me at karim.besbes@siemens.com or your local Siemens PLM Software office.

What's New in Simcenter 3D 2021.2? June 22, 2021 Learn more about Simcenter 3D 2021.2: enhanced auralization, improved turbomachinery analysis, new material models & multiple tabbed windows.
How Simcenter system simulation is deployed in the academic… January 12, 2021 Learn from your peers how are the latest engineering developments taught in the academic world with a special focus on…
Heavy equipment durability testing: Living on the edge! October 28, 2021 Imagine a scenario such that you want to measure real-life loads impacting the durability lifetime of an agricultural machinery. You’re…
This article first appeared on the Siemens Digital Industries Software blog at https://blogs.sw.siemens.com/simcenter/simcenter-amesim-modelica-its-a-match/