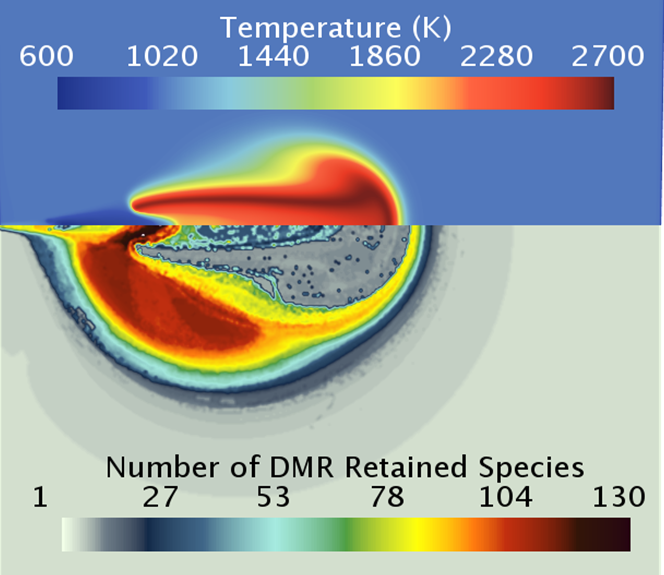 When I started in this field more than 12 years ago, combustion CFD simulations were typically done using CPU inexpensive approaches such as eddy break-up or flamelet combustion models with RANS. The use of complex chemistry in CFD, while offering a route to increased simulation realism, was very uncommon and considered impractical due to high CPU cost, and LES combustion was rarely applied for industrial applications.

A lot has happened since then. LES calculations of events such as ignition and relight are becoming affordable, and while flamelet combustion models still are the best choice for many simulations (due to the excellent trade-off between CPU time and accuracy) using complex chemistry even on large meshes is common practice today. This increase in fidelity is driven by a combination of advances in, and affordability of, high-performance computing and the continual innovation of software tools such as Simcenter STAR-CCM+.

STAR-CCM+ is well suited to such calculations due to the excellent scalability and the capability to solve complex chemistry on large meshes; see e.g. Mallouppas et al for an example of large-scale (10.5 million cells) LES simulations of a Siemens gas turbine combustor, using complex chemistry with the GRI3.0 53 species mechanism.

The good news is that with the release of STAR-CCM+ v12.06 we are advancing this capability even further:

Dynamic Mechanism Reduction adaptively removes the inactive species in each cell at each time step or iteration, prior to calling the complex chemistry ODE solver. It builds up a directed relation graph based on the reaction rates and then traverses the graph from each target species (Species A in the schematics below). Connections with a weight lower than a user-defined tolerance (grey arrows in the figure) are ignored, and the species not reachable are eliminated, leading to, in many cases, significantly smaller reaction mechanisms. Since the algorithm is applied to each cell for the specific conditions in that cell, it can reduce much more effectively than offline reduction techniques used prior to a CFD simulation. This enables faster simulations, and in fact, the algorithm is more effective for larger chemical mechanisms as demonstrated in the chart below. The chart compares DMR against the clustering technique in STAR-CCM+ as well as the combination of the two for a steady 2D flame (Sandia D) and an igniting spray bomb (ECN spray H). As you can see both acceleration techniques are effective, and you can gain even more CPU time by combining them, for these tests up to 6.5x faster calculations. Generally, clustering is effective at large meshes while DMR is effective for large mechanisms, which is noted for the increased efficiency for DMR with Marinov, Ahmed and Lu mechanisms vs GRI and Wang, and the higher efficiency for clustering for the ECN spray vs Sandia D. In most acceleration techniques there is a trade-off between accuracy and speed. All calculations except clustering with the Lu and Ahmed mechanisms were performed using default acceleration settings, and the solution was ensured to be close enough to the solution with no acceleration. For the Lu mechanism OH was added as clustering variable in order to retain the required accuracy, and for the Ahmed mechanism, H2O2 was added. See the figure below for a comparison of instantaneous temperature field at t = 2ms and ignition delay time for ECN spray H using the Lu mechanism.

The number of DMR retained species at t=2 ms is given in the figure below. Note that only around 10 species are required in the hot flame front, while up to 130 of the 188 species need to be kept in the pre-flame zone. An example of ignition in a gas turbine combustor using the FGM combustion model is given in the videos below. The spark location is indicated by the red dot and the flame front is visualized in orange (0.8 < combustion progress variable < 0.9). The blue field indicates areas with mixture fraction around stoichiometry. The highly stochastic nature of the ignition event can be easily observed here, as well as the rapid burning of already existing fuel in the combustion chamber.

So, the dynamic mechanism reduction in STAR-CCM+v12.06 brings you one more tool to significantly speed up your complex chemistry calculations, and the new spark ignition model allows you to easily model ignition in e.g. gas turbine combustors. We hope these additions will help you on the path to increased simulation realism!