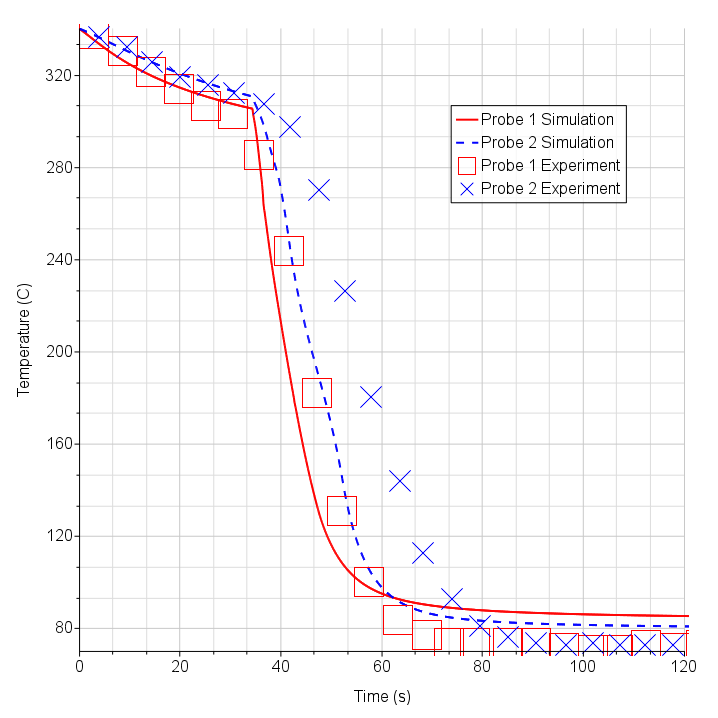 A very famous quote from Albert Einstein goes like this: “When you sit with a nice girl for two hours you think it’s only a minute, but when you sit on a hot stove for a minute you think it’s two hours”. Time is relative in CFD as well. For instance, a very rapid physics might have a very slow effect on a second one. And for this reason, simulating the heating up of a stove for one minute of physical time will take much longer than two hours for a CFD engineer.

Well, the heat exchange of a fluid with a solid is very complex and it depends on the way the two media interact with each other. If we observe for one second a fluid flowing past a plate in a very small space, we will see that thousands of eddies will create and dissipate. In the same short time interval, the plate will heat up of not even half degree. And we’re not interested in the number of eddies, but on the final temperature of the plate, right? Figure 1: Sketch of the co-simulation technique.As often happens in CFD, statistics is at our side. For a fluid flowing at constant velocity and temperature, the fluid will provide heat to the plate at an average rate, even if the fluid is turbulent. From this observation, we can split the fluid and solid worlds, providing time-averaged quantities from the fluid side, to the solid side.

A typical example in which such observation can be of help is the Selective Catalytic Reduction (SCR). In SCR, a urea-water solution is sprayed in the engine exhaust gases. The urea turns into ammonia, which reduces NOx in a catalytic monolith. The spray cools down the walls of the mixing pipe and the wall temperature strongly affects the particles behaviour. Also, a fluid film slowly builds on top of the walls, completely changing the energy exchange over time. The bad news is that the evaporation of the spray as well as the turbulent interaction of the spray with the exhaust gases have very short time scales. For the CFD engineer, this means that we need to operate with a low time-step able to resolve for these time scales.

Figure 2: Sketch of the Birkhold configurationIn Simcenter STAR-CCM+ v13.04, a new technique will provide engineers the ability to calculate long transient time for the SCR mixing pipe cooling down and at the same time to keep an accurate resolution of the spray pattern. The technique is sketched in Figure 1: a first simulation called Simulation A, solves the gas and spray with a low time step. The time-averaged source terms both at the gas and fluid film level are transferred to a second simulation, called Simulation B. In this simulation, a much higher time step is used to solve for the fluid film building and the cooling down of the plate. The technique loops over the two simulations and transfers the temperature at the wall Tw from Simulation B to Simulation A. The technique is validated over the Birkhold configuration [1], in which a urea-water solution spray impinges over a plate. The spray mixes with a gas at constant velocity and temperature (Figure 2). Temperature measurements for two probes are provided for 120 s of physical time. The results from Simcenter STAR-CCM+ are shown in Figure 3 (lines) along with the experimental results (symbols): results are in agreement with the experiments and they are able to reproduce the typical temperature pattern of a wall cooled down by a liquid. In fact, when a plate is hot enough, the particles are isolated by a vapor cushion and roll over the plate, making the heat exchange very inefficient, with a slow temperature decrease (known as the Leidenfrost effect [2]). Finally, the plate will reach a certain temperature at which particles start forming film, which makes the heat exchange more efficient. Once this happens the temperature decrease will be more rapid. Such phenomena is also observed in the video, in which the fields of fluid film and temperature at the wall are shown as a function of time. At first, no film is observed while temperature cools down very gently. Around the 30th second, film starts to build up and temperature goes down much faster, eventually reaching up a final equilibrium temperature.

Up to now everything is fine, but how long does such calculation take? In Table 1, the main statistics for this run are reported for 14 cores. The simulation was 40 times faster than a fully coupled one! Instead of waiting for 20 days, you’ll only wait half day. And SCR is only one single application on which these techniques can develop their full potential. So please stay tuned for the release of Simcenter STAR-CCM+ v13.06, for which we will provide additional capabilities for other applications with very different time scales. One thought about “It’s just a matter of time (scales)!”

This article first appeared on the Siemens Digital Industries Software blog at https://blogs.sw.siemens.com/simcenter/its-just-a-matter-of-time-scales/