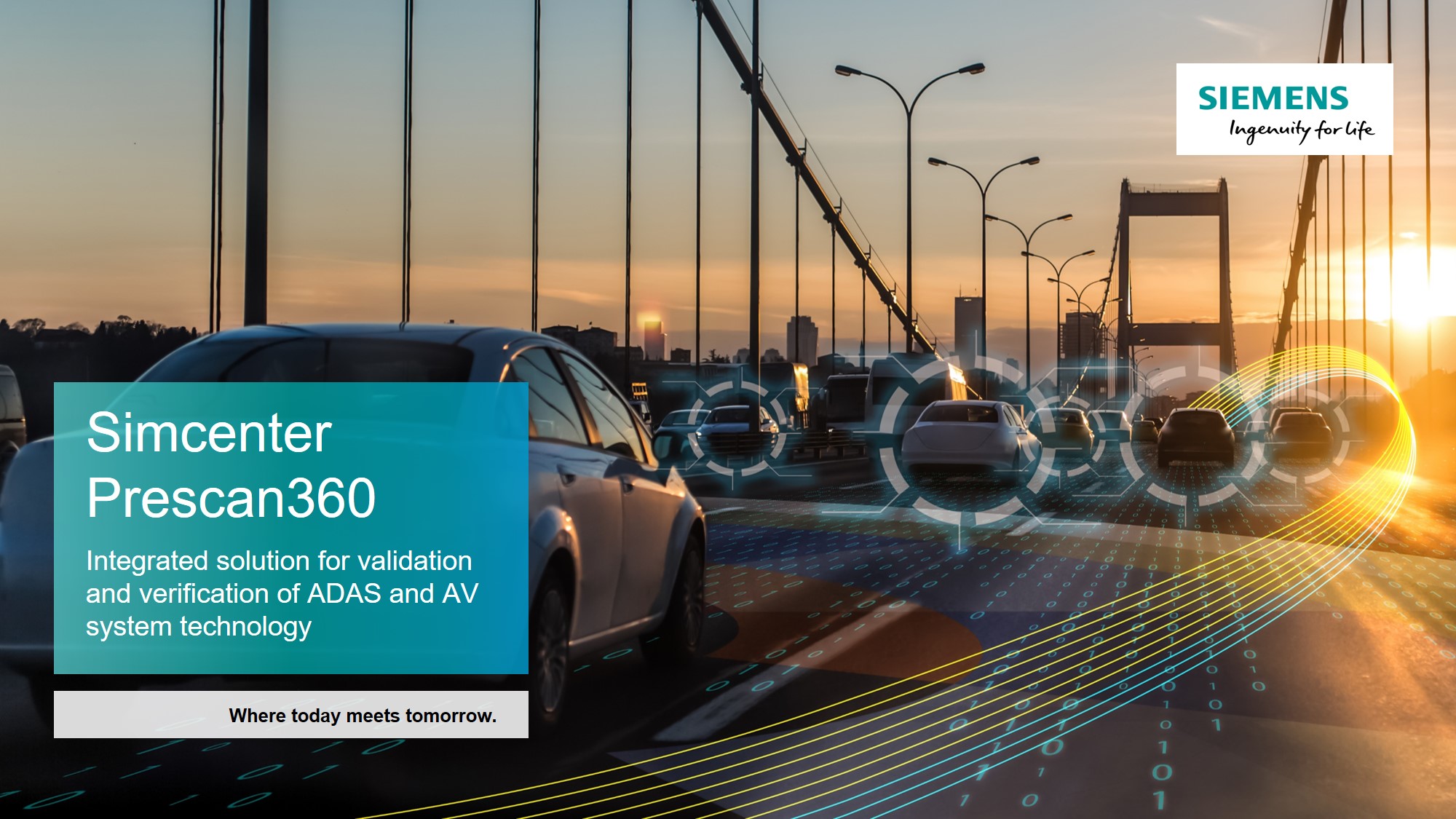 Over the next several decades, the autonomous vehicle market will generate many trillions of dollars of economic activity from new and existing auto makers, shared mobility services, and an increasingly varied auto supply chain. This new autonomous vehicle revolution will also bring big changes to the way the vehicles are designed, manufactured and sold.

The highest priority for car companies stepping into the autonomous vehicles world is occupants safety. To conclude on this question, the automotive OEMs will have to check their ADAS/AD systems behavior in a tremendous diversity of situations, with enough simulation fidelity. One talk about tens millions test cases to be checked for highly automated driving technologies to come in the next decade.

In order to support its customers to overcome this unprecedented challenge, Siemens has developed a cluster and cloud-capable, simulation-based verification framework called Simcenter Prescan360.

This solution makes it possible to generate endless numbers of virtual cases out of template scenarios collections, which are the combination of world models with vehicle models connected through sensor models.

Computer-aided engineering teams can use Simcenter Prescan360 and Simcenter Amesim to model the autonomous system or even assess the complete vehicle. As a part of Simcenter Prescan360, Simcenter Prescan is the core simulation engine for environments, scenarios, sensors, AI and controllers, and its representations contain the reflective properties for radar, camera, lidar and ultrasonic sensors. The sensor models can therefore be scaled from basic ground truth information up to full-wave propagation modeling for detailed sensor evaluations.

Scenarios can be created manually, in a scripted way, or taken from databases such as GIDAS and CIDAS (German and Chinese accident databases, respectively). Also, many OEMs and Tier 1s record traffic data and generate OpenScenario format descriptions, which Simcenter Prescan360 can import.

Simcenter Prescan360 is also very open to third-party tools and scripts to customize the processes for all companies and simulation teams. Simcenter Prescan360 is a cluster and cloud capable simulation solution, with local machine orchestration still available for short assessments and simulation debug. Simcenter Prescan360 can be deployed and used with on-premises clusters, distributed computing or special machines with some deployment tailoring Siemens provides. It can alternatively be deployed and used out of the box on a Microsoft-managed Azure cloud, which makes a lot of sense as a first cloud simulation-as-a-service experience, by outsourcing execution resources scaling and maintenance, while refining the execution platform requirements for later on-premises investment. Siemens plans to address other cloud providers in the future with Simcenter Prescan360.

If more physical properties are needed for the vehicles, Simcenter Amesim is the tool of choice for vehicle dynamics and powertrain modeling. It offers the possibility of modeling car physics and controls, using various fidelity levels that best match any simulation activity.

Simcenter Prescan360 for ADAS/AD was just born and made to confirm autonomous safety and performance, supporting Siemens’ customers to introduce safe, reliable and comfortable self-driving cars.

Read more about Simcenter Prescan360 in this white paper.

4 Myths about AI in CFD April 6, 2021 As Artificial Intelligence (AI) has become more ubiquitous in our everyday lives, so too has confusion about what it is…
Model-based design from ICEs to ICUs: Bridging the… November 10, 2021 The events of the past few years have turned global attention towards health and, more specifically, healthcare. From the images…
Veering Off Course: Transportation Emissions & The Climate… January 11, 2022 Can significant parts of transport be decarbonized with existing technology? What are the barriers?
This article first appeared on the Siemens Digital Industries Software blog at https://blogs.sw.siemens.com/simcenter/how-to-eat-the-autonomous-driving-verification-elephant/