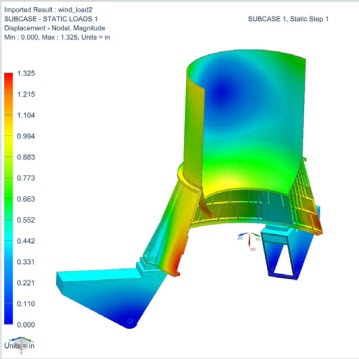 FEA results can mean the difference between success and failure. A rocket launch’s most critical point occurs before the craft ever leaves Earth’s atmosphere—during lift-off.  The stakes are high: A failed launch can cost millions of dollars, not to mention the human costs if it’s a manned mission.

That’s why ATK engineers use NX CAE for their work on NASA’s Space Launch System (SLS). Finite element analysis (FEA) and motion analysis help them keep NASA’s “biggest, most capable rocket ever built” for new human space exploration from colliding with launch-pad structures during lift-off. More on that later. First, let’s look at what the SLS is.

The SLS succeeds the Space Station as NASA’s first exploration-class vehicle in nearly 50 years. (The last was the Saturn V that took American astronauts to the moon.) Its first flight departs in 2017, and it will take astronauts beyond Earth’s orbit and eventually to Mars.

ATK’s work involves the solid rocket boosters (SRBs), which are the twin structures that flank the outside of the ship and provide extra thrust for the first two minutes of flight. ATK performs design and analysis of the SRBs with an integrated NX and Teamcenter solution.

Early SLS missions will use ATK designs that modify existing space shuttle boosters, but to make the trip to Mars they’ll need advanced boosters with an increased nozzle size.  This offers better motor performance, but poses the risk of collision during takeoff with the launch mounts that hold the rocket in place.

To combat this, ATK is designing retractable mounts—a first for the company. Their engineers modeled the booster and mounts in NX, then used that geometry to perform FEA and motion analysis.

NX Motion let them simulate the launch mount movement during lift-off until they got the retraction just right. Then came FEA. The team prepared the finite element model in NX CAE, which let them maintain associativity and any changes to the assembly model in the FEM. They were able to model bolts quickly, tie together free floating parts using surfaces or edges, and automatically create beam elements.

ATK engineers used FEA in part to ensure the launch mounts could handle their loads, but their main concern was the aft skirt that not only supports the rocket’s weight, but also must withstand hurricane force winds during takeoff.

Besides the ease-of-use and time savings they saw with NX’s seamlessly integrated process, ATK got a confidence boost that their model was accurate. Eliminating translation between software solutions greatly reduces the chance for errors. Teamcenter also helps by storing CAE models, results, and reports. This keeps engineers and analysts in sync with the project and any changes.

4 Myths about AI in CFD April 6, 2021 As Artificial Intelligence (AI) has become more ubiquitous in our everyday lives, so too has confusion about what it is…
If you can’t take the heat… Simulate it! Reducing VTM costs… June 10, 2021 Find out how to efficiently and accurately simulate VTM using Simcenter Engineering's multi-fidelity workflows.
Simcenter™ FLOEFD™ 2021.1: What’s New? April 29, 2021 What's New in the latest Simcenter FLOEFD 2021.1 version? Electromagnetics, structural simulation and much more. Find out for yourself.
This article first appeared on the Siemens Digital Industries Software blog at https://blogs.sw.siemens.com/simcenter/fea-results-keep-atk-rocket-safe/