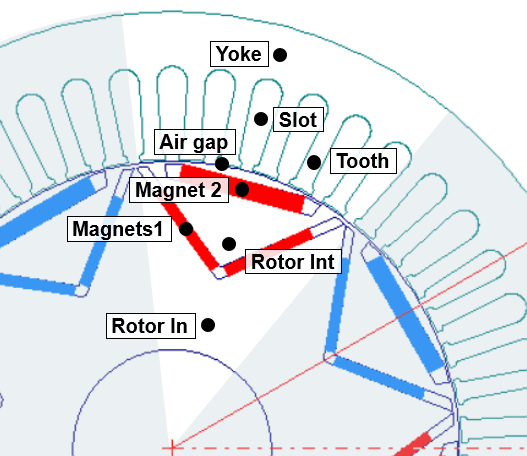 Simulation can be a precious ally to help in addressing those complex challenges at various stages of the design process.

Our complete Simcenter electric machine thermal simulation is presented in the following on-demand webinar. The traction e-machine design V-Cycle is described, including:

In this blog, we will focus on the validation the cooling requirements of a traction motor in realistic vehicle conditions and transient drive cycles

Once the internal cooling of the machine has been designed, the next challenge is to validate the cooling system design and control, to improve motor performance, efficiency and durability.

Again, the objective is to simulate the e-motor in realistic driving conditions, and check that the temperature of the main parts of the motor such as the windings or the magnet remains under a given limit.

The first step is to obtain a complete model of an electric machine considering thermal and electric phenomena. Let’s take as an example the Nissan Leaf machine, 2012 version. Rotor and stator parts are modeled taking into account radial and circumferential heat transfer between the different elements of the machine. Thermal heat exchanges with the shaft are neglected.

18 thermal nodes are used to model the Nissan Leaf electric motor. The thermal modeling approach is presented in the drawing in the middle. Each thermal node is exchanging heat with others through thermal resistance. Rotor and stator parts are modeled using thermal capacitances, and radial and circumferential heat transfer between the different elements of the machine are represented by thermal resistance. These thermal capacitance and resistance are computed using analytical expressions, starting from the information on the machine geometry and material properties.

The thermal resistance calculations for conduction are function of the geometry, and are defined in [1]. One can see below some basic examples:

The geometry and performance data of Nissan Leaf are inputs from literature [5], [6] & [7].

The considered Nusselt number expression is the following:

The Nusselt correlation modeling the heat exchanges between End Space and End Cap is coming from [2]. The heat exchanges within the end space are taken into account since they are having a significant influence on the observed temperatures.

End space part is connected to every rotating and static parts of the machine including the end winding. For rotating surfaces, the considered air velocity is calculated at mid radius of the corresponding surface. For static surfaces, considering that air is entrained by the rotor, we calculate the air velocity at rotor outer radius and apply corrections factors on it. These correction factors are highly dependent on the rotor surface (grooved surface or not) as well as the end space and end winding geometry. It would need detailed CFD simulations for a complete analysis.

The cooling of the Nissan Leaf e-machine is composed of three channels of coolant inside the frame. The frame has been divided into two parts around the cooling jacket, one in contact with the yoke, the other one with ambient air, both being in contact with the end cap. Since the three channels are in series, the cooling loop is modeled with one component representing the total channel length. For the heat exchange coefficient between the liquid and the motor bloc, one can use either classical correlations for laminar and turbulent flow, or import heat exchange coefficients computed by a CFD tool, such as Simcenter STAR-CCM+.

The transient scenario used for a model first validation is extracted from [5]. Comparison on the end winding temperature proves the validity of the approach.

The battery electric vehicle model is shown hereunder. It is composed of a longitudinal vehicle model, a quasi-static battery model, an electric motor model and its control as well as a driver and a high-level controller.

The e-motor model has been obtained by model reduction of a Simcenter SPEED representative model. This reduced model enables to simulate the machine electromagnetic performance while taking into account:

The vehicle mission is the SFTP-US06 driving cycle, repeated 4 times. Just as an indication, these 4 cycles correspond to 40 minutes of driving, but the simulation time is only 1 minute.

As a result of the thermal simulation of the electric machine, you can see on the left the total machine losses as well as the losses on each sector such as yoke, rotor or winding. On the right, you can see the temperature at each thermal node. Then you can check if these temperatures remain under the limit you have defined to ensure machine reliability and performance.

Hereunder you can find the result of an analysis done by changing the maximum flow rate delivered by the pump, between 4L/min and 6 L/min. Rapidly, the impact of the pump flow rate on the motor temperature can be assess.

In this demo example, we emphasize how an electric powertrain with a detailed thermal model can be used to both validate:

This level of detail for the electric drive subsystem is well suited for more thermal simulation and validation. For instance, you can:

There is also the possibility to parametrize an electric machine thermal model starting for Simcenter SPEED. Watch this video to learn how:

In addition, you can read this blog to learn how to export from Simcenter Motorsolve  the electromagnetic performance of an e-motor to Simcenter Amesim.

4 Myths about AI in CFD April 6, 2021 As Artificial Intelligence (AI) has become more ubiquitous in our everyday lives, so too has confusion about what it is…
Surfboard CFD - Riding the Digital Wave July 29, 2022 The flip-flop engineering symposium Monday, December 9, 2019, 7 pm. Sunset Beach Elementary School Cafeteria, Oahu's North Shore, Hawaii. Two…
Model-based design from ICEs to ICUs: Bridging the… November 10, 2021 The events of the past few years have turned global attention towards health and, more specifically, healthcare. From the images…
This article first appeared on the Siemens Digital Industries Software blog at https://blogs.sw.siemens.com/simcenter/facilitating-innovation-in-thermal-integration-of-evs-electric-machines/