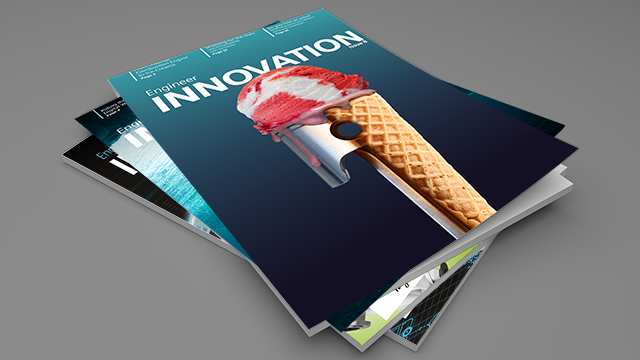 Perhaps the most shocking thing about the latest edition of Engineering Innovation magazine is the cover article, which tells how simulation is teaching Italians to make better gelato:

Now, when it comes to hedonism, I have very little real-life interest in supercars, but I do have lots of experience of eating large amounts of ice cream. I can therefore confirm, without fear of contradiction, that Italian ice cream is absolutely the best in the world.

This poses an obvious question: is it even possible to improve on perfection?

Engineering Innovation Issue 8 tells the story of how an Italian ice-cream manufacturer employed supercar engineers in order to help them design a machine that delivers the best ever gelato. Those engineers used Simcenter to provide a design exploration study that involved 2000 different nozzle designs, in order to find the best sauce pattern and swirl. You can read more about how exactly they did it here.

As much as I love to lick my way through an ice cream on a sunny day, no amount of ice cream is going to mitigate the disastrous effects of climate change…

The human race has an energy addiction problem: our civilisation depends on the plentiful supply of cheap energy. It feeds us, lights our evenings, fuels our movements, keeps us warm in the winter, cool in the summer, and provides endless piles of disposable “things” that we use as a temporary substitute for happiness.

Currently, about 87% of that energy comes from the combustion of the decomposed remains of ancient organisms (natural gas, crude oil and coal), spewing enormous quantities of carbon dioxide into the atmosphere as a consequence. If we want to avoid the most severe consequences of climate change (such as possible mass extinction) in the next 20-30 years, we’re going to have to stop burning fossil fuels altogether.

In this edition, we examine the possibility of using hydrogen as a partial alternative to fossil fuels and uncover many challenges that can only be solved through the extensive use of simulation and test.

We also explore how Simcenter is enhancing the provision of green electricity in Denmark by providing digital twins of individual wind turbine blades that monitor performance and increase the reliability of off-shore installations.

Of course, even as we transition to a green engine future, we are still entirely dependent on the production and consumption of oil and gas. In this issue, we also investigate why petrochemical companies have been slow to adopt the digital twin despite considerable pressure to increase the efficiency of their operations in response to lower prices.

Finally, since man* cannot live on ice cream alone, we also consider the carbon implications of food production and how Simcenter can engineer an electric future for agricultural machinery.

Engineering simulation directly influences many aspects of modern life, but – until now – I’ve never seen it applied to the solution of ancient anthropological mysteries. Engineering Innovation 8 explains how Simcenter acoustic modelling helped to uncover the secrets of how our palaeolithic ancestors lived, worked and painted in the famous Lascaux caves in southern France.

Engineering Innovation 8 also takes us on a journey from the depths of prehistory to the future of engineering, as Remi Duquette how engineers will have to adapt in response to the widespread use of Artificial Intelligence and Machine Learning. It is hard to predict exactly how far away that future is, but another thought-provoking article suggests that it has already arrived asking: “If I don’t use AI, am I really an engineer?”

Maybe I’m not a proper engineer after all.

Finally, a word of advice:  if your hedonistic pursuits include both supercars and gelato, then please don’t enjoy both at the same time; I’m having an awful job trying to get the limoncello gelato stains out of the upholstery of my Ferrari.

From Internal Combustion Engine (ICE) to Ice Cream with CFD… February 15, 2021 (It's the middle of winter here in the US. Summer, sunshine, sandy beaches and soft serve ice cream seem like…
Teaching CAE 3D simulation with Simcenter May 27, 2021 From South Dakota to New Delhi to Xiangyang, China to Leuven, Belgium Advice and ideas on teaching 3D CAE simulation…
4 Myths about AI in CFD April 6, 2021 As Artificial Intelligence (AI) has become more ubiquitous in our everyday lives, so too has confusion about what it is…
This article first appeared on the Siemens Digital Industries Software blog at https://blogs.sw.siemens.com/simcenter/engineering-innovation-8-improving-on-perfection-from-ice-to-ice-cream-using-simcenter/