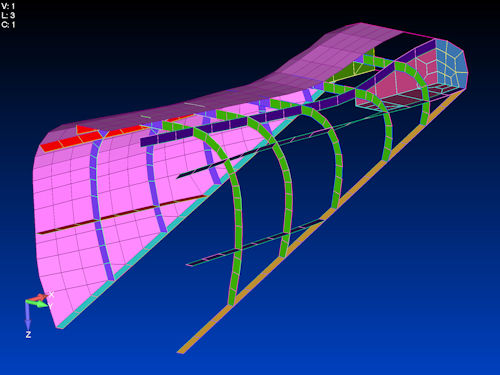 We’re very pleased to announce that Femap version 11.3 has now been released to manufacture, which means it’s also available for download from the GTAC support site accessible with your webkey. Femap 11.3 includes something that should benefit most aspects of the simulation process from model creation, solver support and analysis, to results postprocessing, and more.

Of Femap version 11.3, George Laird of Predictive Engineering remarked, “It just feels more sophisticated, like a knife that has been honed to a higher sharpness.” Preprocessing
There’s an updated connection manager which streamlines the process of setting up connection regions between components in the model. There are viewing enhancements including a new draw/erase toolbar, and a new ability to “walk through” the model and view it from the inside helping with model visualization. Also there are new view control improvements that make it much easier to control view rotation and zooming.

Meshing
Meshing updates in Femap version 11.3 include a new max quads meshing tool, minimizing creation of triangles. There is also an interactive mesh refinement capability that’s a fast way of getting more detail on the model where you need it, and mesh smoothing improvements for highly curved surfaces.

Solver support
There have also been numerous enhancements to solver support including attaching to Abaqus ODB files, CBUSH equivalent elements for Abaqus and ANSYS, and Nastran solution control.

The 4 trends you should not miss in NVH engineering December 2, 2020 What is the role of noise, vibration, and harshness (NVH) engineering in the vehicle development cycle today? How does the…
4 Myths about AI in CFD April 6, 2021 As Artificial Intelligence (AI) has become more ubiquitous in our everyday lives, so too has confusion about what it is…
Surfboard CFD - Riding the Digital Wave July 29, 2022 The flip-flop engineering symposium Monday, December 9, 2019, 7 pm. Sunset Beach Elementary School Cafeteria, Oahu's North Shore, Hawaii. Two…
This article first appeared on the Siemens Digital Industries Software blog at https://blogs.sw.siemens.com/simcenter/announcing-the-release-of-femap-version-11-3-honed-to-a-higher-sharpness/