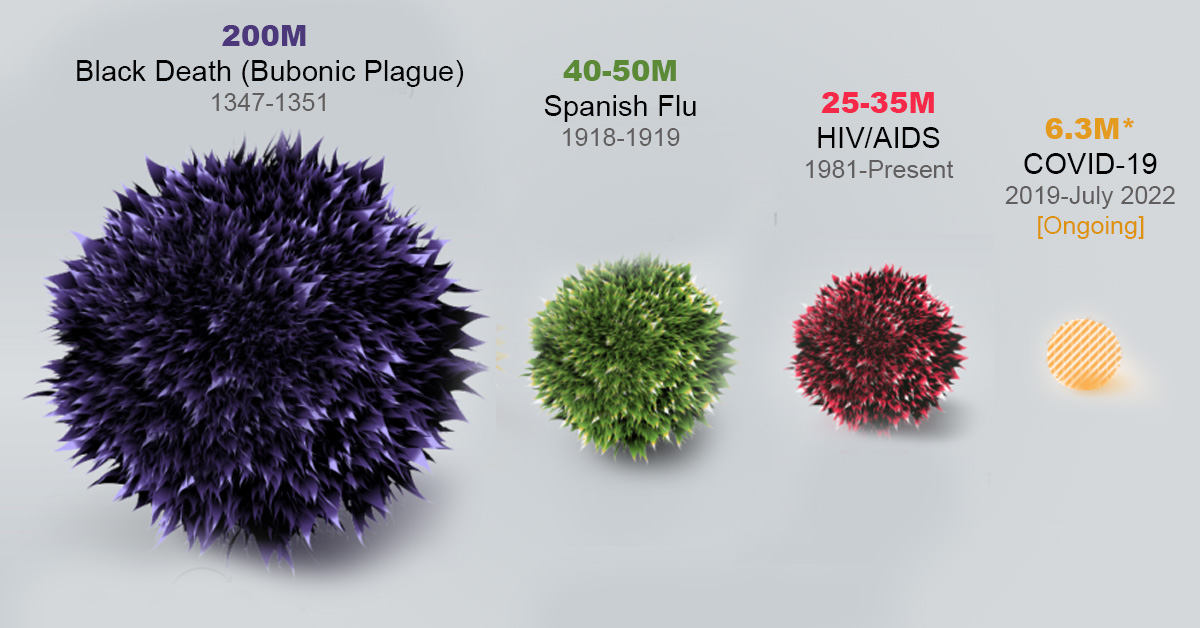 Contagious diseases are a fact of human life. Quite often, they are also a cause of death.

All living organisms are continuously exposed to a plethora of viruses and microorganisms (such as bacteria). Most of these are harmless to humans, and some are beneficial, but a small number can infect us and potentially make us very ill (or even kill us).

Most viruses (and other pathogens) are native to a specific species. Over time the host organism will acquire some degree of immunity against the pathogen, minimizing the consequences of infection and limiting its transmissibility.

Occasionally, a combination of random genetic mutations and bad luck will allow a pathogen to cross the “host range barrier” and infect a new host species. Without the same degree of acquired immunity, the new host can become very ill and rapidly spread the infection. All of the most severe pandemics in human history started as outbreaks when a virus (or bacteria) lept from an animal “reservoir” of infection to a human host.

The results can be disastrous. In 1918 the H1N1, endemic in pigs, spread to humans and ended up killing more than twice as many people as in the First World War. That was the bloodiest conflict in human history and coincidentally ended the same year. In the Middle Ages, the Black Death killed up to 200 million people including half of the European population. It was caused by a bacterial infection that jumped to humans from rats via fleas.

On this scale, the Covid-19 pandemic (probably caused by the SARS-CoV-2 virus jumping from a bat to a human host), wasn’t particularly serious, despite causing millions of deaths and trillions of dollars of lasting economic damage. Neither was it particularly surprising. After the near misses of the SARS, MERS and Ebola outbreaks, World Governments, despite their apparent unpreparedness, have been expecting a pandemic for a while.

Outbreaks are inevitable, but pandemics are optional.

In an overpopulated, highly interconnected, and predominantly urban world, it’s only a matter of time before the next outbreak of a novel contagious disease. While we can’t prevent these outbreaks, we can minimize their impact. In this article, we explore four ways in which simulation is making the world more resilient to future pandemics.

In the early days of an epidemic, when the immunity of a population is low, the greatest challenge for public health institutions is controlling the rate of infection.

The rate of spread of infectious disease into a population is defined by a parameter called the Reproduction Number (often called the “R Number”), which represents the average number of secondary infections caused by each infected person.  If R is consistently less than one, the epidemic is in decline. An R number much greater than one indicates that the disease is spreading exponentially.

Although they can’t directly affect how infectious the pathogen is, governments can introduce a variety of public health interventions to try and reduce the spread of the infection.  Here simulation plays a key role in understanding modes of transmission and how they can be mitigated:

Of course, public health interventions can only do so much to reduce the transmission of particularly virulent infectious diseases. The only real hope of ending any epidemic is through accumulated herd immunity.

In order to control the rate of infection, then public health agencies need to be able to accurately measure the rate of infection across a population. They also need to quickly and reliably identify infected individuals so that they can be quarantined to prevent further infections.

One of the worst failures [of the Covid pandemic] is that the United States never got testing right. Not nearly enough people were tested and results took far too long to come back. If you’re carrying a virus but don’t know it for another seven days, you’ve just spent a week potentially infecting other people.

Bill Gates, How to Prevent the Next Pandemic

Vaccines trick the immune system into “recognising” a virus that it has never been exposed to. By providing it with a “preview” of the virus structure, vaccines allow the patient’s immune system to design potent antibodies that neutralise the actual virus if the individual is ever infected. The World Health Organisation estimates that 2-3 million lives a year are saved as a result of vaccination.

Unfortunately, traditional vaccines – which work by exposing the patient to a weakened or inactivated strain of the virus – can take years (or even decades) to develop and gain regulatory approval, which is no good in combatting a fast-moving novel pandemic.

During the Covid-19 pandemic, world governments rushed through regulatory approval of RNA and DNA vaccines. These vaccines work by injecting a portion of the virus’ genome into the patient.

Once absorbed by host cells, these genetic instructions tell the cell to manufacture multiple copies of specific virus proteins (usually spike proteins) for several days. The synthetic genetic material is only a partial copy of the genome that cannot replicate. Still, it is enough to train the patient’s immune system to develop antibodies to attack the virus.

The challenge is that these strands of genetic material are fragile and need to be protected on their journey into the cells of the patient.

Siemens helped BioNTech convert a facility in Marburg, Germany, to produce its mRNA COVID-19 vaccine, which it developed with Pfizer, in record time: cutting the estimated over-a-year timeline to just five months with automation and digitalization technology.

You can read more about the role the Simcenter played in vaccine production for the Covid-19 pandemic by reading “Digital Vaccines for Digital Viruses”.

Once an effective vaccine is available, the next challenge is implementing an effective delivery program. The problem here is that administering vaccines requires a degree of medical training. One of the struggles of the COVID-19 pandemic was mobilizing enough trained medical professionals to administer the vaccines. This included bringing many doctors and nurses out of retirement. Another issue was manufacturing enough active vaccines required to administer more than 12 billion doses worldwide.

Siemens’ customer Voxdale is using Simcenter to design an automated intradermal vaccination device that could solve these problems for future pandemics. Intradermal means ‘into the skin’ instead of intermuscular, which means ‘into the muscle’.

The advantage of injecting into the skin is that it takes only 1/10th of the vaccine required to have the same effect as an intermuscular injection. This is a significant saving when manufacturing, transporting and administrating tens of billions of vaccine doses.

The problem is that dermis is very thin – about 1 to 4 mm, and offers a much smaller target than injecting into muscle.  So injections need to be incredibly precise.  Intradermal vaccination is historically challenging to apply manually. It requires specialised training to insert a needle at an angle of 10 to 15 degrees to the skin’s surface (known as the Mantoux technique). Too shallow, and it will leak onto the surface of the skin. It has been shown that about 70% of intradermal injections using the Mantoux technique are incorrectly administered.

Once the reliability of the device has been demonstrated (and been through the arduous regulatory approval process) devices such as these offer the prospect of fully automated vaccination clinics that do not require hordes of expensively trained medical professionals to administer a simple jab.

As successful as the Covid-19 vaccination programme was, delivery was biased towards those living in the most economically developed countries. Only 20.9% of people in low-income countries have received at least one dose. Not only is this a problem for the people that live in those countries, but it also is an issue for attempts to irradicate the virus. These unvaccinated populations provide a reservoir of infection in which the virus has a chance to mutate and evolve, possibly into a more virulent form that can re-infect vaccinated populations.

Another significant challenge is delivering temperature-sensitive vaccines to remote communities. Vaccines must be kept within a specific temperature range to avoid being spoiled.

Voxdale has used Simcenter to design a battery-powered vaccine carrier capable of maintaining the temperature of vaccine doses in a tightly specified temperature range (typically between 2 and 6C) on long road trips in hot countries.

The Covid-19 pandemic was a wake-up call that the mutation of a few genes in an animal-hosted virus can have devastating consequences in terms of lost human life, restriction of freedom and near-catastrophic economic damage. Infectious outbreaks of novel viruses are inevitable (and likely to increase in frequency). As a species, we need to be better prepared for the next one. We simply cannot afford a repeat of the death and destruction caused by a random mutation in the SARS-CoV-2 virus. While it isn’t a panacea, engineering simulation will certainly play a key role in making us resilient against the next pandemic.

in vivo, in vitro, in silico: unleashing innovation in… October 10, 2022 Advances in medical technology generally take place in small, entrepreneurial companies. The financial (and humanitarian) rewards are high, but so…
Engineering Enhanced Humans October 17, 2022 Prosthetic engineering is not new, yet prosthetic devices remain out of reach for many. Can the latest engineering innovations help?
Simulation for a fitter world October 24, 2022 Can Simcenter help us to stay fitter and healthier? Read how simulation can help increase our performance in sports.

This article first appeared on the Siemens Digital Industries Software blog at https://blogs.sw.siemens.com/simcenter/a-pandemic-resilient-world/