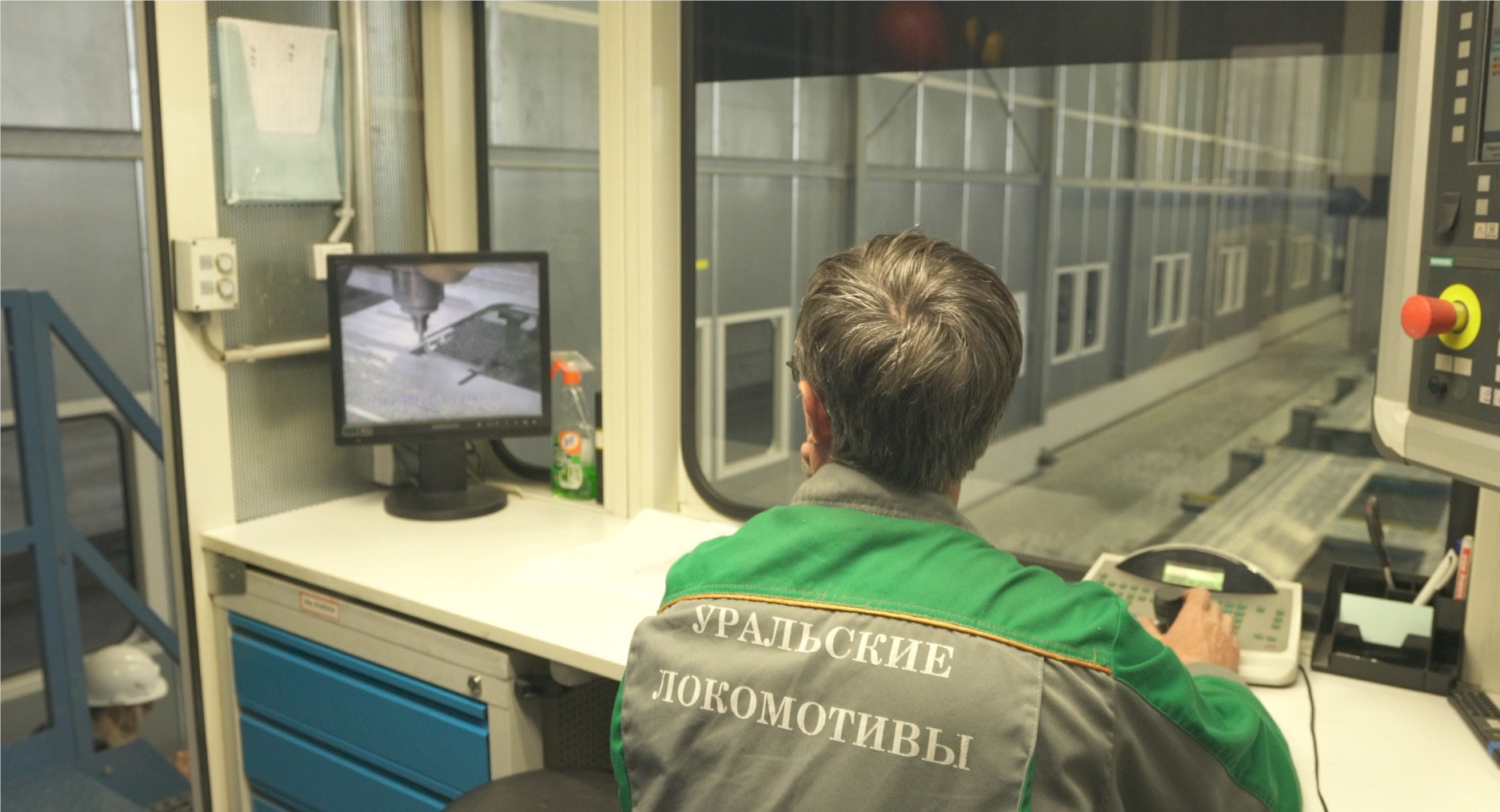 High-speed trains shorten the travel time between the regions of a large country such as Russia,and offer excellent riding comfort. The first such train assembled in Russia was the Lastochka (the EС2G make). It can go 160 kilometers per hour (km/h), and the standard five-carriage train can carry up to 1,500 passengers. The Lastochka, which means “swallow bird” in Russian, has been modified to better match the country’s conditions: The electric train can run in a tropical climate and in a frigid northern climate. The acceptable tempera­ture range is from -40 to +40 Celsius. The carriage door arrangements are suitable for Russian railway platforms that can be installed at various heights.

The Lastochka development began in 2009 when Russian Railways ordered a regional dual-mode electric train from Siemens. The train had to be adapted to Russian condi­tions. The new trains were intended for Sochi commuter service during the 2014 Winter Olympics. Then they would serve other routes to provide direct links on tracks with both DC and AC power.

The new Russian train design was based on the Siemens Desiro ML five-carriage electric train. The first 54 EC1 series trains were manufactured by Siemens in Krefeld Germany between 2011 and 2014.

“Ural Locomotives was under significant time pressure to not just assemble the electric train in Russia following the origi­nal German drawings, but to develop a complete design package that complied with Russian standards for the product assembly with components from Russian suppliers,” says Vitaly Brexon, deputy chief executive officer (DCEO) for engineering policy, Ural Locomotives. “The local content had to be really high, so we needed the original 3D models.”

A track to digitalization

A well-coordinated Siemens PLM Software technology deployment led to rapid end-to-end digitalization. It took less than three years to launch an industrial grade produc­tion of the Lastochka trains. The local content of the product is as high as 80 percent.

“Siemens PLM Software’s technologies help us to rapidly develop modern rolling stock, and enables us to be up-to-date so we can compete with famous companies both domestically and internationally,” says Peter Vaulin, head of the mechanical design division in the research and devel­opment (R&D) department of Ural Locomotives.

The digitalization began with the deploy­ment of Teamcenter® software for product data management (PDM) and NX™ soft­ware for computer-aided design (CAD). Concurrently the designers received CAD training to enable them to design the Lastochka train based on the DESIRO RUS platform.

Ural Locomotives took a comprehensive approach to information technology (IT)

The corpo­rate enterprise resource planning (ERP) management system and Teamcenter integration project included transferring digital product structures and changes. The integration has been implemented with built-in Teamcenter tools. It has enabled Ural Locomotives to establish a unified information environment for all of its divisions. It has also improved the performance and coordination of the manufacturing and auxiliary departments.

Using concurrent engineering in NX that is managed in Teamcenter has helped the firm design the complicated components of the Lastochka electric train and its modifications in an efficient and high-quality way, removing errors in design documents and establishing an automated compliance check procedure.

“Working with Teamcenter, the designers concurrently develop all the components in a single model and can see any updates made by other stakeholder,” says Dmitry Khaziyev, senior design engineer, locomo­tive underframe department, mechanical design division. “Such an approach reduces errors that are hard to identify with other design procedures and would likely only be found once the product was assembled.” Due to the close partnership with Siemens PLM Software’s Russian team, company experts have quickly mastered structural element strength, rigidity analysis and dynamic train performance analysis to estimate ride smoothness and the comfort of passengers. To meet the passive safety and crash worthiness requirements, colli­sions with obstacles on the track have been virtually simulated.

Siemens PLM Software’s Simcenter™ soft­ware is an engineering analysis tool that has enabled Ural Locomotives to create an efficient Lastochka train and locomotive design in a virtual environment without many physical tests.

“Engineering analysis systems like Simcenter significantly boost the perfor­mance of our engineers, analysts and designers, and reduce the scope of works for the test engineers,” says Peter Vaulin, head of the mechanical design division, research and development (R&D) depart­ment of Ural Locomotives. “In the shortest time possible we try a large number of design options and evaluate each design virtually without building any prototypes. It saves a lot of time. Now we can develop modern rolling stock really fast, and be up-to-date. We compete with famous companies both domestically and internationally.”

With the digitalization approach used in the Siemens PLM Software’s solutions today, Ural Locomotives fully complies with all the custom union standards, certification requirements and directives.

The Lastochka train design meets all the safety and ergonomics standards. The train body components are made of extruded aluminum. The metal is corro­sion-resistant, while the special panel design ensures low weight and structural rigidity of the carriage required for a high-speed ride. The manufacturing of such body parts is quite innovative for Russian industry. It is similar to the aero­space industry, but Ural Locomotives is the only Russian company that manufactures highly complicated parts from long extruded profiles.

The CNC machining of carriage body parts had to be planned from scratch. The initial task was to machine a carriage size panel 23.9 meters (m) long. The wall compo­nents misaligned by two to three millimeters (mm) when fixed to the machine tool. Even worse, the side component length varied by three to four mm. The panel carries important interior components, electric equipment and heating systems. For this reason, it was important and difficult to align all the parts while preserving the panel flatness. The Siemens PLM Software experts and their colleagues from Ural Locomotives had to adapt the milling operation and correct the CNC code for each panel segment.

Working with Teamcenter, the designers concurrently develop all the components in a single model and can see any updates made by other stakeholders. Such an approach reduces errors that are hard to identify with other design procedures and would likely only be found once the product was assembled.

The panel was measured and the cloud point was processed with NX CAM. Then the module generated a CNC code perfectly adaptable for any surface irregu­larities. The adaptive machining technology available in NХ СAM takes into account any manufacturing environment changes occurring after the initial analysis.

“Without adaptive milling with NX CAM, it would have been impossible to machine the extruded aluminum parts,” says Vladimir Dudorov, manufacturing engineer, welding and assembly department, Train Production Planning Division, Ural Locomotives. “We would have faced consistent overcuts and faulty parts.”

Having achieved excellent results with the carriage side wall machining, the experts adapted the carriage roof and underframe machining in which the components also have varying length and other special features.

Initially at Krefeld where the Desiro trains were manufactured, such parts were machined using expensive tooling. Now Ural Locomotives is able to use affordable tooling and the workpiece location proce­dure developed with NX CAM. A train part workpiece is installed on a machine that doesn’t require a high degree of accuracy for its extrusion. NX CAM is used to gener­ate the CNC code and a CNC machine performs all the machining. NX CAM generates the CNC code.

The Siemens PLM Software suite of solu­tions has delivered high-quality manufacturing of the expensive Lastochka train components with lower production planning costs. Manufacturing defects have been eliminated. The solutions based in NX CAM have reduced machine setup time with automated workpiece location, while virtual CNC code simulation has accelerated the planning time by 30 percent. The manufacturing time for carriage workpieces was reduced by 40 percent.

Lessons learned during the Lastochka project at Ural Locomotives have been applied to designing a mainline electric freight locomotive with an induction traction motor (model 2EC10), one of the most powerful DC electric engines for the 1,520 mm gauge lines. The electric loco­motive can drive trains weighing over 9,000 tons. That is twice as much weight as the commonly used VL (a class of Australian diesel locomotives built by Avteq, Melbourne) locomotives.

In the near future the company is going to deploy the Teamcenter Requirements Management module to consolidate and apply the requirements to train design, safety, efficiency and noise, and to gener­ate new product configurations as these initial requirements change. The Teamcenter CAD Data Management module will also be deployed for effi­ciently coordinating engineering analysis data, easily searching and re-using analy­sis results, and creating and managing complex assemblies.

This article first appeared on the Siemens Digital Industries Software blog at https://blogs.sw.siemens.com/nx-manufacturing/train-manufacturer-uses-nx-cam-to-reduce-time-to-manufacture/