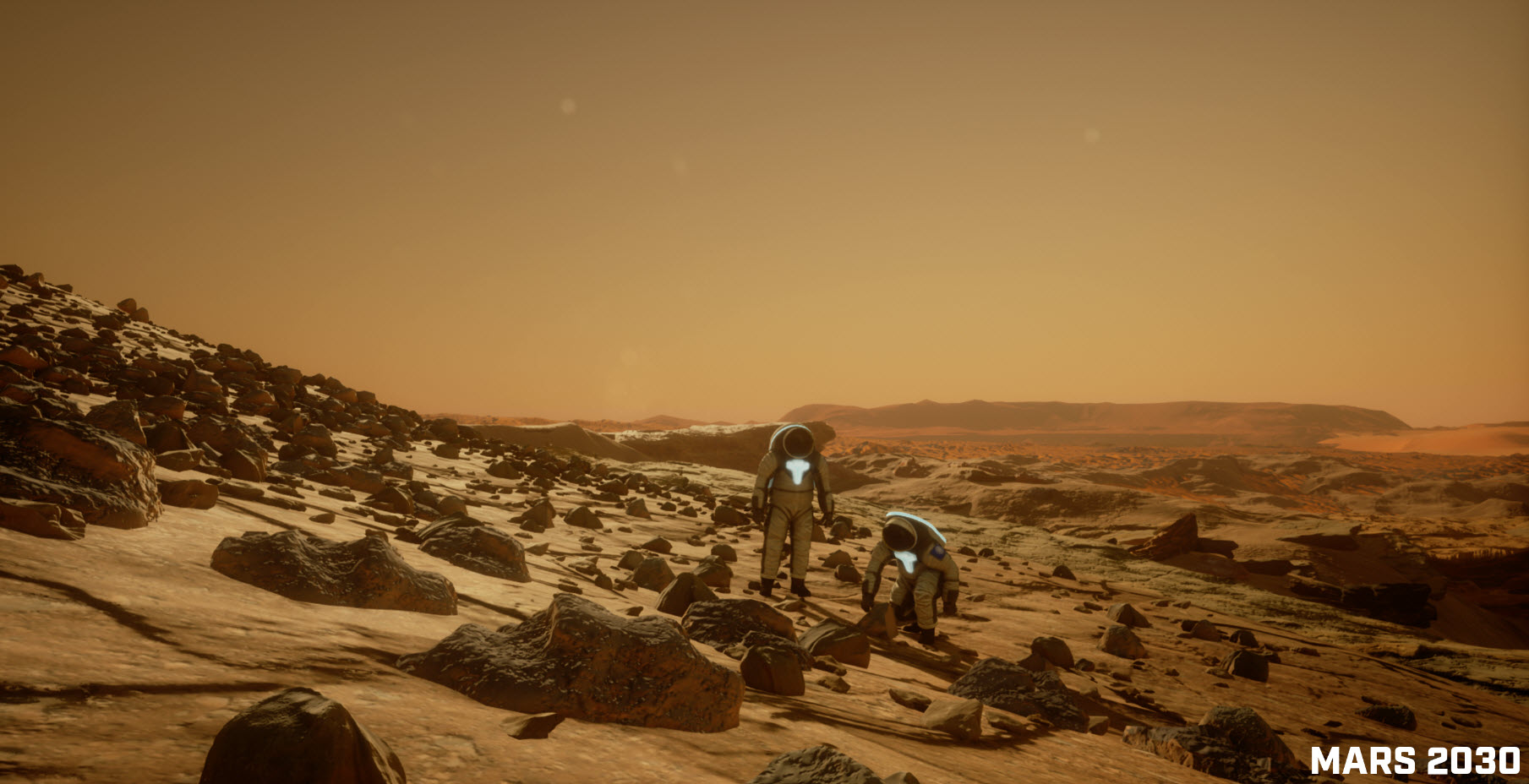 You step outside onto a barren, rocky landscape the color of rust that stretches before you as far as the eye can see. Valleys, boulders, mountains… all are visible from your vantage point on a hill. You are 141 million miles (226 million km) from Earth. Or at least it appears that way. Welcome to Mars 2030. This is no science fiction tale. It is the latest in VR (virtual reality), an ambulatory landscape that is accurate down to the last detail within 30 cm of actual elevation. Thanks to the latest NVIDIA technology, miles of topographical data collected by NASA, and the ingenuity and creativity of the folks at FUSION, anyone who has ever dreamed of going into space can now experience the next best thing. Considering the acceptance rate for NASA’s aeronautics program is around 0.08%, it’s safe to say this is the closest you will come to setting foot on Mars in your lifetime.

Steve Wozniak of Apple fame had the honor of trying Mars 2030 out for the first time. This was just one of the major moments during NVIDIA’s GPU Technology Conference last week.

More than 5,000 people gathered in the heart of Silicon Valley to witness the latest and greatest coming out of the best tech companies from around the world. While many topics were covered, the spotlight was truly on advancements to self-driving cars, deep-learning and AI (artificial intelligence), and virtual reality.

In the latter category are projects like Mars 2030 and Everest VR – another hyperreal experience showcased at GTC 2016, but this time from the developers at Sólfar Studios. Everest VR puts you 25,000 feet atop the world’s highest mountain. It’s so realistic, you may even feel the cold winds whip around you, as one Forbes journalist who got to try it did.

The implications of this technology for product development—really, any industry—are huge. Imagine being able to take a customer through a virtual tour of a plant to see exactly how their products will be manufactured. Or being able to design products in true-to-life 3D, seeing them as they will really appear from every angle, and “holding” them in your hands long before they are ever manufactured.

One company called ZeroLight has already realized the potential VR and 3D visualization have for automotive retail. The UK-based company has teamed up with Audi AG to create the Audi VR Experience—a virtual showroom that uses ZeroLight’s advanced visualization solution and NVIDIA technology “to provide multi-million polygon models of Audi vehicles” according to a press release. Those who tried it at GTC 2016 got to see various signature Audi vehicles up close and personal, including the 1930s Auto Union Silver Arrow racing car in a special reveal.

These types of innovations are the result of integrating different software and hardware solutions. NVIDIA seeks to provide companies with more ways to use unique and groundbreaking approaches by delivering a set of specialized software development kits (SDKs) for a variety of functions: AI, VR, design, gaming, and more.A big part of that initiative is Iray VR and Iray VR Lite, both of which were announced at GTC 2016. Iray VR reconstructs photorealistic environments from a light probe array, similar to some gaming technologies, while Iray VR Lite is an Android app that allows you to view VR content on a mobile device. Iray VR in particular holds a lot of promise; it gives anyone who has existing Iray integration the possibility to leverage the more cutting-edge technologies such as VR.

If you happened to catch CEO Jen-Hsun Huang’s presentation or replay, then you already know NX falls into that category. NX was featured in Jen-Hsun’s keynote for use of Iray+ starting with the next release of software. Iray stands for Interactive Ray Tracing (you can read what is ray tracing in a past post) and is the latest rendering technology from NVIDIA. The “plus” comes from the Lightworks SDK.

What this means for you is that, starting in the next NX release, you will have access to top-of-the-line rendering capabilities with an expanded materials library based on NVIDIA’s material definition language (MDL). You can create such photorealistic images that it is darn near impossible to tell the difference between what is real and what is rendered. There are plenty of benefits that go along with that, such as creating beautiful images for marketing and promotional use, or even being able to identify flaws in the aesthetics of your design earlier.

During GTC 2016, Siemens PLM Software was a featured partner in NVIDIA’s booth. NX Product Manager @PattiLongwinter﻿, who is our visualization expert, along with my colleague Himanshu @H_Iyer﻿ got to show off this great technology on a 4K display to the multitude of conference-goers.

You have a chance to see these new capabilities in person for yourself during PLM Connection 2016 in Orlando, Florida. Patti will be hosting several sessions in which you’ll get to see and discuss NX with Iray+. Join us for the following:

Render Like a Photographer with NX Ray Traced Studio

This article first appeared on the Siemens Digital Industries Software blog at https://blogs.sw.siemens.com/nx-design/rendering-vr-and-ai-oh-my-the-inside-scoop-on-nvidia-gtc-2016/