I have some interest in natural history. Although I do not go bird watching or have a comprehensive knowledge of wild flowers, there is little I like more that being in the countryside surrounded by just the sound of birdsong. I also love making things; or perhaps I should say making things work and solving problems. This all came together recently when I was considering the execution of one of my “12 Things for 2019”: “research swifts’ habitat (nest boxes)” …

When I first moved to my house, there were birds that nested in the eves [under the edge of the roof]. We would enjoy seeing them swooping through the sky making a characteristic noise. We learned that they were swifts and would return each year. We had the roof thoroughly refurbished, which removed the space where they nested, so they sadly never returned. I discovered recently that suitable bird boxes might attract them back. 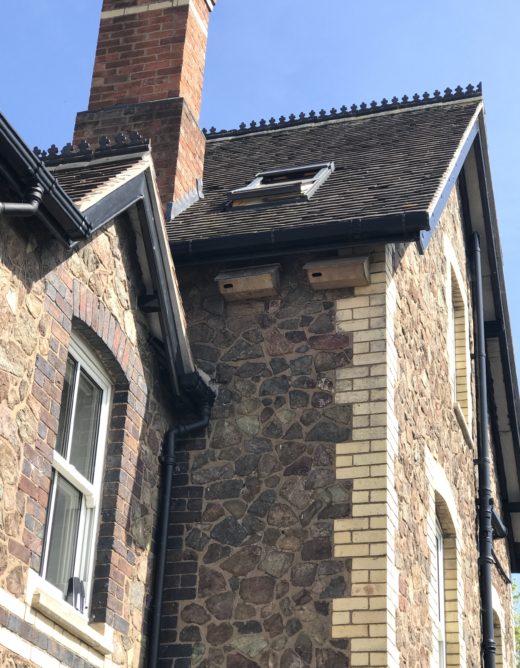 A knowledgeable friend provided some advice and he gave us a swift nest box. He recommended installing two or more, so I purchased another and we got them installed. The next thing was attract swifts. We could just wait, as there are swifts in the neighborhood and they might notice the boxes sometime. But I wanted to have a chance to see action faster. The friend told us that playing the appropriate swift song might help attract them. He gave me a CD.

My next challenge was to find a way to play the CD near the nest boxes. I soon discovered that we no longer had a working, stand-alone CD player in the house – iPods and Sonos long since too over. What I did find was an old “boom box” that could play MP3 files. I ripped the CD to a thumb drive and we were in business. Putting the boom box on the window sill resulted in a stream of birdsong that could be heard from as much as 75 yards away.

There were two remaining challenges:
1. How could I set things up so that I did not need to leave the window open?
2. How could I get around the need to manually turn the sound on and off, as required?

The first problem was easily solved. I needed some PC speakers. I had disposed of a couple of sets a few months back, so I needed to acquire some. I found just what I wanted in a yard sale and paid just £1. For another £1, I bought a plastic sandwich box to protect them from the weather; I drilled holes to let the sound out. I then tied the box was onto the window sill and led the wires inside and I could shut the window.

Setting up a timer was more tricky. My first thought was to set up an MP3 track sequence that would run for 24 hours, with periods of birdsong and periods of silence. That would work, but would be inflexible. I had a plug-in timer, but I could not use it with the boom box, as it would not start playing automatically. Then I found the answer, when reading about someone else with a similar installation. I play the MP3s continuously, but use the timer to turn on the speakers from 06:00 until 22:00 and I can over-ride at any time. It works perfectly.

It is now a constant source of entertainment, watching people who stop in the street and stare, wondering where the birdsong is coming from. We enjoy hearing it and wonder if that is all we need; maybe real birds are overkill … ?

It is relatively unlikely that we will get tenants this year, but, because of the swifts’ very unusual life-cycle, we are in with a good chance next year. When a swift hatches, it spends a few weeks growing in the nest and then takes to the wing. It will then not land for about 4 years! The birds migrate between Africa in the winter and Europe in the summer. The adult birds nest and breed in Europe. The only time that they are not flying is when they are incubating their eggs. The younger birds do the same migration, but spend the summer checking out nesting sites for future years. Nobody really knows how they find their way back to the exact spot that they located in a previous year, but we hope that our nest boxes have been noticed by some of these younger birds.

BTW, for any techies who saw the headline of this post and thought that I was going to talk about programming Apple devices: Sorry.

OFF-TOPIC: The history of today March 18, 2021 When I was at school [a long, long time ago!], I really could not see the use, or more specifically…
OFF-TOPIC: Expectations vs reality January 14, 2021 I am of the opinion that disappointment is an underrated emotion. Many people do not see to take it seriously.…
Medical Devices and the FDA, a History of Change August 26, 2022 As you probably know, devices of all types continue to get more complex, more interconnected, and in the world of…

This article first appeared on the Siemens Digital Industries Software blog at https://blogs.sw.siemens.com/embedded-software/2019/05/23/the-swift-project/