My colleague Faheem Sheikh recently attended the 2012 IEEE High Performance Extreme Computing Conference (HPEC ‘12) at Waltham, MA USA. It would seem surprising, on the surface, that such an event would be of interest to specialists in embedded software. However, Mentor Embedded’s HPC Library products, like Sourcery VSIPL++ play very well in this space and illustrate how the scope of embedded software is expanding and why Mentor Graphics was a gold sponsor of the event.

Faheem has kindly allowed me to share some of his observations …

HPEC took place over 2 days – Tuesday/Wednesday 11/12 September. But, as is common with large conferences, there were additional activities outside of these hours. In particular, on Monday there was a half-day tutorial titled “High Performance Computing: Embedded and Distributed Systems”, which brought together a number of aspects of HPC with conventional embedded systems development. This tutorial featured three sessions:

The main conference included numerous technical sessions. Each day there was a keynote and two invited speakers. 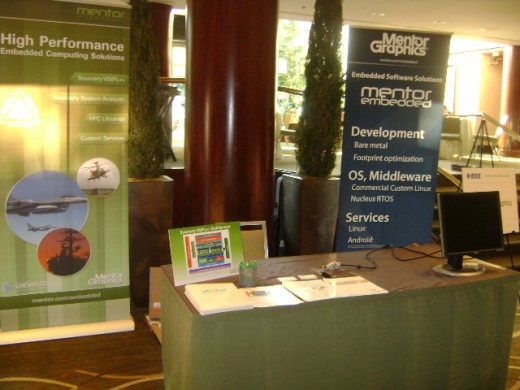 Mentor Embedded had a booth in the exhibition area, that was manned by other colleagues.

A particular highlight of the conference was the awarding of a best paper award to our colleague Stefan Seefeld for his paper A MATLAB-to-target Development workflow using Sourcery VSIPL++. Here is a summary:

Stefan started by telling the audience, now that they have heard a lot about performance, it was time to worry about productivity. He then went on to explain the multi-language development work flow and how he proposed a unified approach. Stefan presented Sourcery VSIPL++ MATLAB bindings that expose same data model and API as Sourcery VSIPL++ allowing developers to easily convert MATLAB algorithms to embedded C++ code. He also argued the importance of an integrated test and prototyping system and showed how Sourcery VSIPL++ MATLAB bindings achieve that with the help of a signal processing example.

Safety Certification of Software Modules – What and Why is… July 14, 2022 Standards apply to products, services, and everything in between. Products, processes, services and even people can be certified. According to…
Quality Considerations of Open-Source Software for Medical… January 17, 2022 Traditionally, software intended to run on a medical device was expected to be written by companies well versed in writing…
Embedded World February 22, 2021 Next week is Embedded World - the annual event when everybody involved with embedded system design descends on Nuremberg, Germany…

This article first appeared on the Siemens Digital Industries Software blog at https://blogs.sw.siemens.com/embedded-software/2012/10/09/hpec-12/