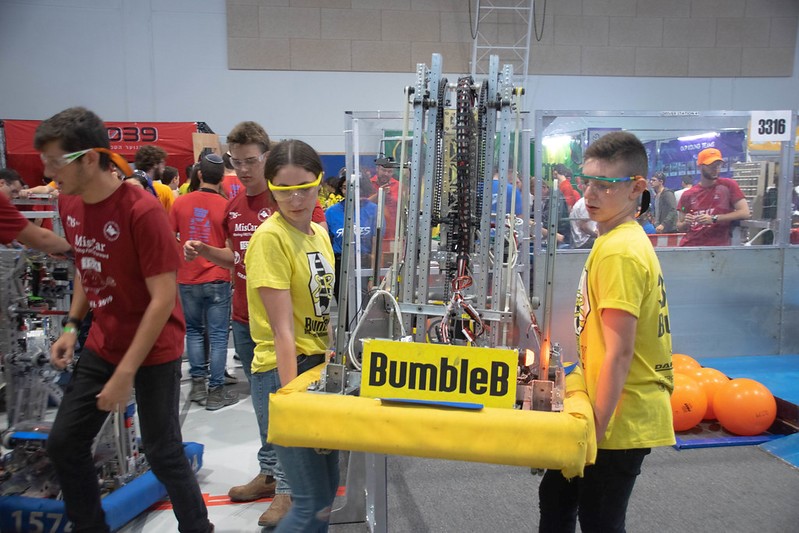 FIRST is a Family Affair!

I recently talked with Yarden Saad, a robotics mentor to FIRST Robotics team #3339 BumbleB to learn about his involvement in FIRST and how both he and the team have grown since Yarden joined its rookie year.

FIRST team 3339, BumbleB, is based in Kfar Yona, HaMerkaz, Israel and have an impressive track record having won not only FIRST Israel but also Worlds’ Divisions. Yarden has described the spirit of the team as “always wanting to get better and improve.” Saad currently serves as the team’s CAD and mechanical mentor overseeing the fabrication of the robot, and he brings both personal and professional engineering experience to the post.

Saad was first introduced to FIRST in 2009, after seeing an article announcing that his school would be starting a robotics team.  At that time there were not any other technology related clubs at the school.  He joined the team as a 10th grader and credits his FIRST experience as having heavily influenced his choice of career.  “FIRST allowed me to imagine something for the future, it was like a dream for me.” Saad recalled.  One of the BumbleB’s sponsors was a manufacturing company, and they allowed Saad to work on the manufacturing floor where he learned first-hand about the process of designing and manufacturing.  “I’ve learned so much about the process of designing and manufacturing a product through FIRST.  In fact, my final degree project at university was very small compared to the complexity of designing and building a robot.”  Saad also commented that he “hopes more schools would offer engineering programs, because as he realized very early on, the future is going digital.”

Today, Saad works as a project manager in the automobile industry, and he remains a dedicated FRC mentor. Since 2017 he has also served as the head judge for FTC in Israel and has judged the championship events in Romania for the past 2 years.

As a mentor, Saad teaches his mentees how to use Solid Edge 3D CAD software because it can help to solve design issues virtually, saving time and materials.  Saad shared that he finds Solid Edge to be a great tool for his high school mentees because it is easy to learn and his students “get it” quickly.   This year, he also plans to introduce the new Introduction to Wiring your FIRST Robot tutorial to help the BumbleB’s address some problems they encountered last year around the wiring of a double-sided arm.

For Saad this will be a very busy year because he’s also pursuing a master’s degree in business administration.  Nevertheless, he’ll continue to mentor his beloved B’s, and he’ll have a little help, because for Saad FIRST has become a family affair!  Both of his brothers are involved with mentoring First Lego League and First Robotics Competition teams, his mother volunteers regularly as a First Lego League judge, and his father helped the team getting its new facility.   I guess it is safe to say that the Saad family values the impact FIRST can have in a student’s life.

Best of luck to the BumbleB’s this season!

Watch the BumbleB’s robot reveal in this video .

This article first appeared on the Siemens Digital Industries Software blog at https://blogs.sw.siemens.com/academic/first-is-a-family-affair/