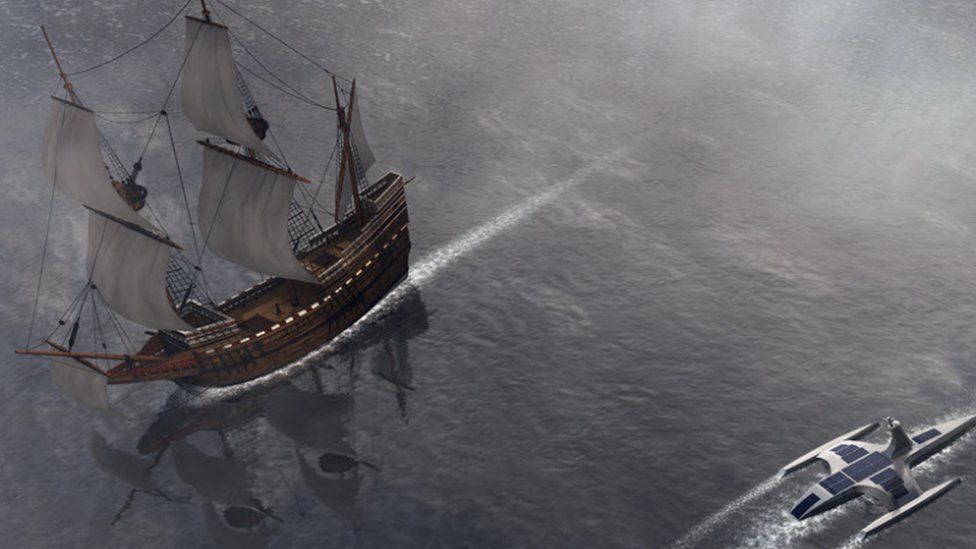 There are many amazing accomplishments throughout history defined by brave journeys across the oceans. In the United States, a classic historical story is the adventure of the folks aboard the Mayflower. How old were you when you heard this story? Yet, you still remember it today. 132 passengers and crew set sail from England to America in 1620 and after a hard-fought voyage, arrived in Massachusetts in 10 weeks after around 3500 miles travelled.

Navigating the Atlantic Ocean was a dangerous task in the 1600’s. The crew depended on crude astronomy instruments, compass, rudimentary sea charts and math skills to figure out where they were, the correct direction, and to figure out how far they travelled. Of course, the big issue at that time was figuring out longitude because there was no accurate method of telling what time it was. They used the position of the sun at noon as a guide. GPS would have been a real asset to this crew! After a five month period docked in Plymouth Massachusetts (while the settlers built out some housing), the ship returned to England in 1621. Fast forward 401 years and we look in on an amazing ship that just launched this week: the Mayflower Autonomous Ship. It was supposed to launch on the 400th anniversary, but was delayed a year.

The ship is a 50 foot long trimaran that is powered by the sun and it can move along at 10 knots. It does have a diesel generator for backup power. By contrast, the original Mayflower was a 100 foot long, triple-mast sailing vessel that had a top speed of 3 knots.

I have not captained a ship, but I would imagine that the key skill of a captain is to be able to plan and execute a response for any unexpected event. So, to replicate a human captain, IBM created the “AI Captain” software for the ship with Watson at its foundation. It takes data from over 50 sensors (including 6 cameras) into a real-time machine learning engine that analyzes the inputs. The analyzed data is fed into a decision engine that can react to any environmental issues. And just to make it harder, AI Captain is also trained to follow maritime law when deciding on route changes.

AI Captain uses a combination of machine learning models for pattern recognition and rules to make decisions on its own. All the data from the sensors, analyzed in real time, allows the ship to make correct decisions much faster and even better than a human captain. Of course, with no crew on board, the boat can probably make faster turns because it does not have to worry about tossing someone overboard.

Because the ship is bristling with sensors, the partner ProMare ocean research company also created programs to collect data on marine life and sample water for plastic waste content. The ship is also carrying drones for experiments. The idea here is that aside from the awesome navigation technology, the ship might as well also do some science along the way.

While the 1620 trip took 10 weeks, the autonomous version is supposed to take three weeks. Beyond the improvement in speed and the fact that the ship is autonomous, I suspect this is an experimental platform that will propel the idea of cargo ships that can crisscross oceans with no crew in the future. And, by creating the AI Captain, IBM is well on the way of creating the brains behind that endeavor. Plus, it looks like they created a generic AI Captain that can be trained and deployed in other industries. Smart! The first graphic of the Mayflower ships is from IBM. The Mayflower Autonomous Ship photo comes from Mayflower400uk.org. This is a great website if you want to learn everything about the Mayflower ships. Want to slip into the captain’s seat? There is a very cool dashboard of the ship with live webcams and tracking as the ship is on its journey. Check it out here.

Update: The ship had to return to England due to a mechanical issue. Check the news for the re-launch and then give the dashboard link a try.

This article first appeared on the Siemens Digital Industries Software blog at https://blogs.sw.siemens.com/thought-leadership/2021/06/17/return-of-the-mayflower/