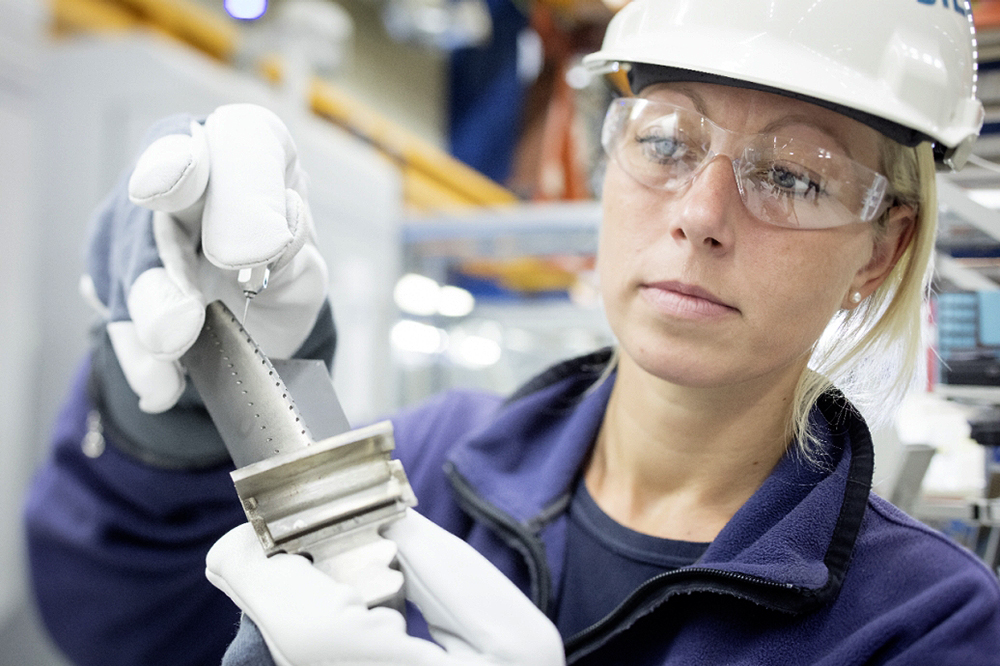 The centuries-old city of Finspång, on the banks of Skutbosjön Lake, Sweden, has been a center of industry since the 16th century, when local factories produced cannon and cannonballs for the country’s military.

Finspång’s economy is still driven by industry, and the city is home to a number of metal processing plants and gas turbine production facilities. It is within the gas turbine industry in this small municipality, 180 kilometers (112 miles) southwest of Stockholm, where the future is being additively manufactured. The major employer in this industry, and in this area, is Siemens, which manufactures gas turbines at an innovative, cutting edge production facility in the city.

To understand why these innovations are occurring in Finspång today, it is important to understand the city’s history. Cannon manufacturing spanned nearly four centuries and evolved by the 1890s to become a major industry, with the last cannon being produced in Finspång in 1911. In 1913, the city entered the modern industrial age with the inception of turbine production. By 1955, the gas turbine business had begun and, by the 1980s, the resultant medium-sized gas turbines, capable of generating from fifteen to sixty megawatts, were being used in new and aftermarket applications.

By 2009, Siemens had begun using metal AM systems from Germany’s EOS GmbH. Andreas Graichen, Group Manager for the Additive Manufacturing Centre of Competence at Finspång, stated that the team initially believed it could do everything it wanted with new designs and new materials.

“This was only partly true,” he said. “The engineers quickly recognized there was much work to do if they wanted to realize AM’s full potential.”

AM has, however, played a critical role since, and the company’s engineers soon discovered that this technology could be crucial in spare and new parts production. Facility engineers knew they were on the cusp of something new in 2012, when they used AM in a new machine designed strictly for burner repair. Two years later, the Centre for Additive Manufacturing Competence Development opened, building upon previous work with the digitalization of the technology for rapid design, manufacturing and repair. Finally, in 2016, a specialized automated AM facility was opened with eight new machines.

Today, the facility houses more than 2,600 employees, fifty of whom are dedicated to additive manufacturing. It produces world-class, efficient and reliable gas turbines, with 95 percent of production being exported.

“The beauty of the site’s setup is that Finspång has everything in one place that is needed for design, production, testing and aftermarket support,” stated Vladimir Navrotsky, Technology and Innovation Manager of Siemens Service Distributed Generation and Oil and Gas.

The facility is a comprehensive operation that includes a design team for gas turbines, a test facility to test the engines, a state-of-the-art manufacturing facility including serial production, and a service organization that provides feedback from the operational fleet.

The combustor burner is a key element in the turbine, where the struggle for efficiency and emissions reduction is won or lost. This dynamic creates the perfect storm for change and disruption by digitalization. Developing a gas turbine can include a large number of design changes, but, because of the significant costs associated with these changes, designs are normally limited to two or three iterations. Modifying a turbine design for traditional manufacturing can require costly new castings and molds, with long lead times using expensive raw materials. The need to minimize lead-time, costs and iterations drove the introduction of digitalization and the use of additive manufacturing technology into the industrial turbine manufacturing process.

The initial years: From rapid prototyping to spare parts on-demand

Additive manufacturing is now a standard part of the Siemens product development process, which includes prototyping, the building of components, testing and defining materials for design. “The Finspang facility is the world’s largest internal user of Siemens NX AM software solutions, with hundreds of seats.

In the beginning, engineers at the Finspång facility looked to AM for rapid prototyping, allowing for the construction of functional prototypes that could be tested and physically validated. As mentioned, building turbine components and parts using traditional methods is an extremely complicated process, with long lead times. The team saw AM as a way to shorten lead times and allow for more cost-effective part testing and verification of new designs.

At its inception, the facility worked closely with EOS for its AM equipment needs and to this day Finspång primarily uses Laser Powder Bed Fusion (LPBF) technology and EOS machines. The original machines at the facility were EOS M270s, which allowed the facility to rapidly build prototype parts for testing and validation from digital designs.

The beginnings of innovation: Burner tip repair via additive manufacturing

When a burner is installed in a gas turbine and runs in the field, the burner tip will erode after a certain number of hours due to the extreme heat from flame and combustion inside the turbine. The cost of new burners can be high, so this was a driver for Siemens’ efforts to repair and re-certify burners as a lower-cost alternative.

The long-standing method for repair involved first sending the burners back to Sweden. There, they were loaded into a milling machine where 120 mm of the damaged area–essentially the front section of the burner– was machined away. A new front section was then welded on, completing the refurbished burner assembly. While more cost-effective than assembling a new burner, this process was still lengthy and required several manual steps.

As engineers in the Finspång facility became more familiar with the possibilities of additive manufacturing, they wondered if AM could help them to redesign the repair process for these burners. Siemens collaborated with EOS on a process where only 20 mm of the front of the burner was machined away to provide a clean, known surface. A new front section was then additively manufactured directly onto the burner – massively reducing scrap, work and repair time.

To make this process work, the facility worked closely with EOS to design a special version of the M280 AM machine which incorporated a unique fixture system to load and hold the burner, an optical system to orient the print, and a unique process to print a replacement tip on the front of the machined burner base.

This process has been hugely successful.

“We have produced thousands of repairs in this new way of replacing the tip: a fully industrial process,” Graichen said. “Moreover, we have reduced turnover time by 70 percent.”

The newly-designed burners were put into service in turbines across the world, but the true test was whether they would last through the required number of duty cycles. After 20,000 hours of operation, the burners were inspected and found to be in good condition, meaning that they were able to continue to run in the field without immediate repair or replacement.

These new burners are just the beginning of several benefits of additive manufacturing at the Finspång facility. More innovations in design and production led to world-class manufacturing we will discuss later.

This article first appeared on the Siemens Digital Industries Software blog at https://blogs.sw.siemens.com/thought-leadership/2019/05/03/digitalization-enables-industrialization-of-additive-manufacturing/