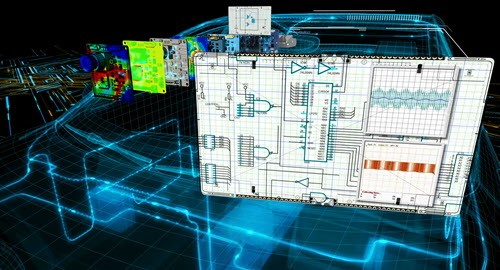 Circuit board layout plays an important role in current vehicles, but as autonomous and electric vehicles hit the road, these electronic systems and their circuit boards will play an even more critical role. As such, knowing where to start in the development and simulation process is key.

The starting point for electronic systems is the circuit schematic, which represents the functional layout of electronic components including resistors, capacitors, transistors, microcontrollers and other electronic and electrical components. They’re usually represented by connected symbols for each component for the system in a methodical format, and the schematics can be simulated to evaluate and assess required functionality before hardware is generated.

While these capabilities currently exist, new enhanced functionality is required to address situations unique to autonomous and electric vehicles. You need to understand how environmental temperatures, component tolerances and manufacturing tolerances may adversely affect the circuit performance. Cheaper components being considered may have a larger variance in performance that also needs to be assessed and evaluated. And, changes in software to address different or new targets or requirements need to be quickly assessed in the electronic configuration.

As the next generation of vehicle products are under intense research and development, timing is paramount. New electronic components are coming to market daily that may provide key functionality to such systems, even just before launch. It’s critical to evaluate such changes quickly; you don’t want slow simulation processes keeping you from getting to market faster than your competitors. A comprehensive circuit board layout and digitalization strategy can keep things on track.

Earlier in my career, I saw one such example of this situation. Late in the development of an automotive instrument cluster, a last-minute change was implemented to the circuit; it was deemed necessary to achieve functionality and was implemented before for full testing evaluation could be completed before vehicle launch. It was agreed to continue testing after vehicle launch as everyone felt there was low failure risk related to the change.

Unfortunately, after months of testing, an issue was identified where the odometer reached a certain number of miles and stopped. Of course, this required retrofitting the vehicles and cluster systems already built.

A system simulation of such a change would have virtually identified this issue and allowed it to be fixed before release. Though this was a minor functional glitch, there may conceivably be someone out there driving a vehicle with the stopped odometer miles on it – forever!

This concludes the fourth part of our series on electronics systems and the challenges to provide solutions for products of the future. If you wish to start from part 1, please click here.

Greg Roth is the director of automotive and transportation solutions in the Industries Group at Siemens PLM Software. In his current role, he champions CAD, CAE & PLM technologies and processes for companies at a global enterprise level so they can achieve substantial reductions in product development costs and time while improving overall quality. He previously held positions at Ford Motor Company, Eaton Corporation and Amcor Packaging. He was also chief engineer for the CAE and NVH departments at ZF-TRW Automotive North America Braking Systems in Livonia, Michigan. Greg holds an master’s degree in mechanical engineering from the University of Michigan, a master’s degree in electronics and computer controls engineering from Wayne State University and a bachelor’s degree in mechanical engineering from Michigan State University.

This article first appeared on the Siemens Digital Industries Software blog at https://blogs.sw.siemens.com/thought-leadership/2019/04/10/accelerating-circuit-board-layout-design-through-advanced-digitalization-part-4-of-8/