The growth of electronics in automobiles has spurred significant innovation in the development of advanced safety mechanisms for all the electrical and electronic systems in a vehicle. In addition to very high-quality manufacturing test, ICs for safety-critical applications need in-system test to detect faults and monitor circuit aging. Scan-based logic built-in-self-test (LBIST) is the technique used for in-system test, but traditional LBIST often can’t meet the coverage goals within the required diagnostic test time interval (DTTI). 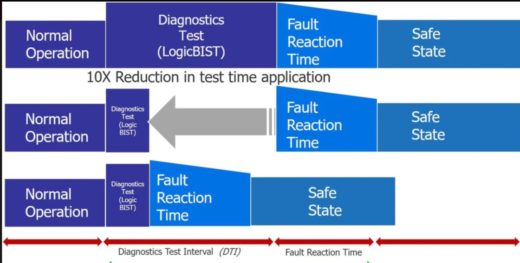 Designers need an LBIST solution that allows them to meet 90% fault coverage within the DTTI required, without adding to the area overhead. A new LBIST technology that dramatically improves the efficiency of in-system test has been proven out by major automotive IC design houses. The new LBIST technology is called LBIST-OST (Logic BIST with Observation Scan Technology).

In a recent Tech Talk with Semiconductor Engineering, Mentor automotive product manager Mohammed Abdelwahid talks about how to maximize coverage in the different ASIL standards for logic BIST,  how to make testing more efficient, and what impact that has on area and test time. You can watch that video here

LBIST is widely used for in-system test to detect faults that could violate safety goals. However, the pseudo-random nature of LBIST poses a challenge to automotive IC designers it simply cannot meet the coverage goal within the assigned DTTI. Reaching the coverage goal of 90% for Automotive Safety Integrity Level (ASIL) D certification might involve increasing the LBIST to a point where the area overhead makes the chip unviable from a cost perspective.

The pseudo-random nature of LBIST is not the only challenge to DTTI; another impediment is that fault detection happens only during the capture phase of the LBIST cycle. Each LBIST cycle has two phases—shift and capture. There are as many shift cycles as the length of the longest scan chain. The capture phase uses the values written into the scan chain to drive the combinational logic and capture potential faults. That means all the time spent on the shift phase is time faults are not being detected. What if you could observe circuit responses during those shift cycles? It greatly improves the overall observability of the design.

Control and observe test points improve LBIST random-pattern test coverage. In the LBIST-OST architecture, an LFSR on the input side operates as a decompressor in ATPG, and as a pseudo-random pattern generator in LBIST mode. On the output side, a spatial compactor drives channel pins during ATPG, and drives the MISR in LBIST mode.

Unlike traditional test points, the LBIST-OST observe points use a new scan cell functionality that essentially connects the observe points in separate chains. This allows them to capture circuit responses not just during a capture cycle, but also during the shift cycles.

LBIST-OST technology leverages test points to reduce the DTTI by increasing the fault detection period, delivering up to 10x faster in-system test than traditional LBIST and reduces the number of test patterns needed.

DFT and the competitive edge September 1, 2021 Smart DFT for quality and TTM Don’t let your plans for successful new SoCs be derailed by a lack of…
Video: ITC India 2020 keynote—Test community can take on… September 15, 2020 The role of test is expanding from its traditional role into one that includes managing the entire silicon lifecycle. To…
Tessent LBIST with Observation Scan Technology Wins Elektra… April 9, 2021 A Tessent technology was awarded the 2020 Elektra Design Tools and Development Software Award from a crowded field of nominated…

This article first appeared on the Siemens Digital Industries Software blog at https://blogs.sw.siemens.com/tessent/2020/03/30/a-leap-forward-for-in-system-test-for-automotive-ics/