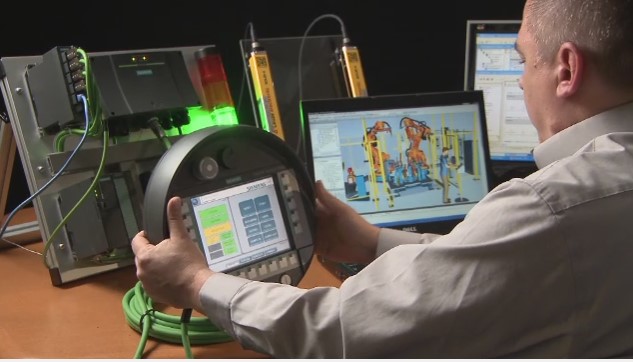 Manufacturers and, in extension, their suppliers are experiencing unprecedented pressures of competition: changing customer demands, ever shorter product lifecycles, increasing number of product variants, reduced product launch times, and increasing pressure in terms of earnings. At the same time, and to address these pressures, ever more flexible production machines and production systems are being introduced, with sophisticated tooling, mechanized automation, robots, transfer lines and safety equipment. To coordinate and ensure all of those pieces are operating in concert with one another, Programmable Logic Controllers (PLCs) are employed.

Given machine and system sophistication, a particularly critical and sensitive phase must occur prior to being able to start production. This phase is when deliveries from mechanical, electrical and controls engineering come together for the first time to form the production machine or system. Until now, such integration was only possible on the shop floor, which meant that every realized change or rework at that stage generated delays, increased costs, threatened loss of reputation, and potentially reduced market share, undoubtedly if such changes adversely affected machine delivery or production launch. Even when the only change is an update to the PLC program, engineers still incur delays or even production stoppages while they debug that PLC program against live equipment. Virtual Commissioning allows engineers to connect the Digital Twin to the PLC to test, refine and optimize mechanical, electrical and logical designs, and the integration between them, well before hardware is assembled on the shop floor, without the need to delay delivery or stop production.

Since commissioning spans varying device types and systems constructs, Siemens products are tailored to match specific commissioning needs. Each product is designed to highlight the specific characteristics and behavior of interest of the device or system for which it is intended. In all cases, hardware-in-the-loop simulation using various Siemens controls can be performed as part of the virtual commissioning process.

Such systems or machines use robotics extensively. The PLC interacts significantly with the robot or robots and testing must take into account detailed robotic simulation. Examples of such systems are spot weld assembly lines, material handling systems, spray painting booths, and machines with integrated robotics.

Such systems are constructed of conveyors and devices, whereby the devices are attached to or perform in concert with the conveyors. Examples of such systems are automotive assembly conveyance systems, in some cases spanning across the entire plant, baggage handling systems, and material flow automation for both discrete and process manufacturing industries.

These machines have internal mechanisms that move or process parts and interact with both PLC and CNC controls.Of major importance here is physics behavior of parts, such as gravity, force, torque, and load profiles used for sizing drives. Examples of such equipment are assembly machines used for packaging and machine tools used for milling and grinding operations.

About the author: Noam Ribon is a Senior Business Consultant with Siemens PLM Software with a specialization in Digitalization of Manufacturing, program, project and IT management. Noam has over 30 years of Computer Aided Design (CAD), Product Lifecycle Management (PLM), Digital Manufacturing and Digitalization (Industrie 4.0) software experience across various industries.

If you have questions or comments for Noam, please leave them in the comments section below.

This article first appeared on the Siemens Digital Industries Software blog at https://blogs.sw.siemens.com/tecnomatix/virtual-commissioning-with-the-digital-twin/