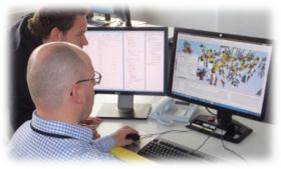 ﻿An article by the Associated Press, “Robots replacing factory workers at a faster pace,” states that mechanical means of production are getting cheaper and more adept at handling changes. The story says that in a report by Boston Consulting Group titled, “The Rise of Robotics,” cheaper, better robots will replace human workers in the world’s factories at a faster pace, pushing manufacturing labor costs down 16 percent over the next decade.

The story goes on to say that BCG predicts that investment in industrial robots will grow 10 percent a year in the world’s 25 biggest export nations through 2025, up from two percent to three percent a year now. We agree with BCG in saying that the investment will pay off in lower costs and increase production efficiency.

BCG forecasts that robots will cut labor costs by 33 percent in South Korea, 25 percent in Japan, 24 percent in Canada and 22 percent in the United States and Taiwan. Only ten percent of jobs that can be automated have already been taken by robots. By 2025, the machines will have more than 23 percent. BCG says robots are getting cheaper. The cost of owning and operating a robot spot welder, for example, has gone from $182,000 in 2005 to $133,000 last year, and will continue to drop. This is great news for manufacturers looking for ways to cut overall costs of production.

The report states that new machines can do more things. New robots can operate in unpredictable environments and use improved sensors to react to the unexpected. According to RBC Global Asset Management, robots can be reprogrammed far faster and more efficiently than humans can be retrained when products are updated or replaced.

As a manufacturer, you know that market pressures are requiring that businesses build more automation and increased flexibility into production facilities. Individual plants need to increase the number of products they can build, while exceeding their current quality targets and optimizing their shop floor footprint. More and more we see manufacturers beginning to rely on robotics and automation systems to help increase production efficiency and flexibility.

It is clear that robots can change how work gets done in the factory. The BCG report advises businesses to start preparing for the “robotic megatrend” by identifying, among other things, mission critical applications. Mission critical applications are considered tasks that demand exceptional precision, flexibility, or speed—such as electronic chip production—or require maneuvering in small spaces lending themselves to robotics.

How can Siemens PLM Software help?

For many years, Siemens has led with robotics simulation and programming technologies that enable robots to improve manufacturing efficiency, accuracy, and productivity. Our solutions can help manufacturers to develop and simulate manufacturing processes for robotics applications, including tooling and peripherals. Engineers can also construct studies based on event-driven simulation capabilities and offline programming for automated systems.

Check out all of our robotics simulation and programming solutions here and don’t be late to the robotic megatrend party.

This article first appeared on the Siemens Digital Industries Software blog at https://blogs.sw.siemens.com/tecnomatix/the-rise-of-robotics/