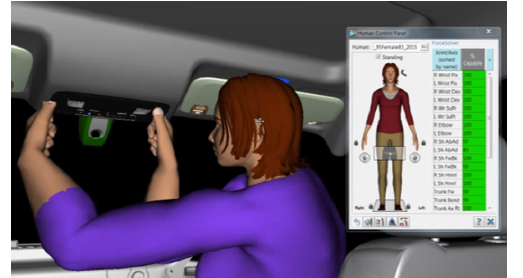 Watch the video, “Human Simulation and Motion Capture in the Future Factory,” to learn more.

In the presentation I focus on high level ergonomics process that we implement at GM early in the product stages as well as the manufacturing, where we focus on the early on stages of designing the vehicle, where we want to engineer all those ergonomic issues out of the vehicle before it even gets to prototype vehicles, and before it gets to the assembly plant.   In the presentation, we highlighted mainly how we are using static posturing using the Jack software model today and where we intend to go, how motion capture with the human simulation can help us in the future.   And, start to look with all the new technologies, how it can benefit us and do simulations more accurately and more consistent for the operators.

For the most part our ergonomists will do about one hundred and fifty simulations, ergonomics analysis including reach – can the Jack manikin reach the part?  We look at clearance  – can their hand get the optimal grip on a part?   We look at clearance and access.   We also look at line of sight, making sure there is vision, so it doesn’t promote awkward postures.   And we also use the biomechanical model in Jack software to assess the strength.  So, when we do those assessments for strength, we are reporting out what is the force number that the product engineering community should target when they are designing parts to be assembled in the car.

I think the main benefits of Jack software are the other engineers that don’t work in the plants who have never assembled any parts on the car – they are able to get a visual so the design engineers once an ergonomist presents them a study that shows this is how a connector would be assembled, this is the grip you need, this is how far it might be in the car, and what might be obstructing the operator.  So that’s the big part of it because they may not have been on a line and don’t know what an operator is going through and it puts them in that 3D world, representing the team member on the line – what they are doing daily and put them (engineer) in the position of what operators are doing once per minute, where it would look like on the car.

Our future needs in looking at static analysis would be in improving the biomechanical modeling of the human so anytime we start from scratch and have to do a simulation where the ergonomist doesn’t know how that would be built in the future, we do not build that part today, it could be a battery electrification – improving the overall kinematics of Jack – and how the human would interact with new parts and different assembly line heights.

Assembly force prediction – maybe improving algorithms or starting algorithms where we can assess and measure the force, what it would take predict how much force it would take to put together a part in the future where we could put that in the Jack model and not have to wait for a physical build to measure the force with a force gauge.  We would like to predict that force and put that on Jack or Jill in the model itself to get a better representation of how the posture might look like, and then analyze it for fatigue and recovery with that force.

Flexible Part Modeling would be another area of interest for us – looking at the static analysis everything is frozen  —  we don’t know the bends of the harness, how to calculate those, hoses, harnesses, connectors.  What are the bends?  And, that all creates pressures on the wrists and elbows so how can we better input those models into the Jack in the environment?

Motion Libraries.  We touched on static, frozen shots in time.  We want to go to that dynamic process where we can see how an operator really braces himself or postures themselves when they are dealing with a high amount of force.  It  may not be as representative when we are looking at a static scene, so a car is always moving so they get themselves in posture or position available to maximize their strength in that task.

Retargeting for all individuals is something that I talked about so if we are doing motion capture on a male, we want to make sure that most of a certain population can reach all those parts.  Retargeting is an area where if do a motion capture on a stature we want to make sure that all the population in our plants can reach and make those connections or assemblies.  Being able to retarget onto the Jack model, say a fiftieth percentile female, you know that the rest of the population will be able to reach across the vehicle.

This article first appeared on the Siemens Digital Industries Software blog at https://blogs.sw.siemens.com/tecnomatix/human-simulation-and-motion-capture-in-the-future-factory/