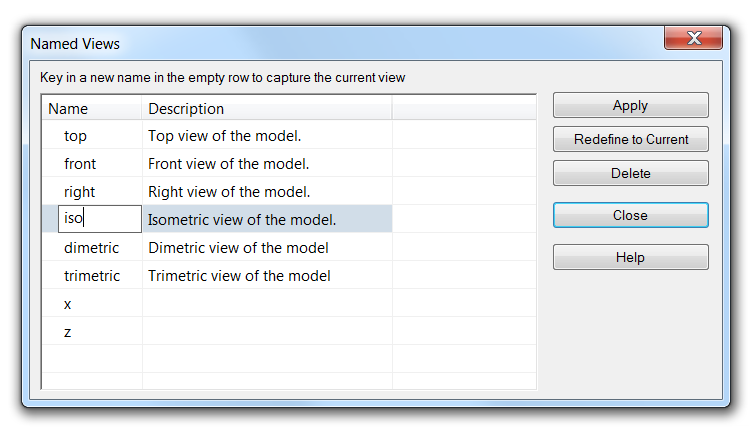 One of the sets of tools I haven’t covered yet, and indeed I don’t understand very well yet is the set of Orient tools. I was a master of view orientation in a previous life, and the knowledge I had didn’t really translate into much when I started using Solid Edge. So I want to take a little time to go through all these tools. Inevitably, one of you will educate me on some stuff I don’t know, and maybe I’ll stir up something that one of you has forgotten. View orientation tools are some of the most used and most important tools for 3D modeling. Let’s take a look and see what we find.

First, I have to confess, one of the reasons I’ve gotten away with not having to learn such a basic set of tools as Orient is that I’m the proud owner of a couple of 3DConnexion spaceballs. I have one on both my work computer and my CAD machine. I’ve got an older SpacePilot and a newer SpaceMouse Pro. I’ve used these things back to the 2002 version I think from the mid-90’s.  The manufacturer always brags about how much time they save, and I don’t know anything about that,  but I do know that they allow me to do a lot of things that I probably just wouldn’t do without them.  And unfortunately one of the things it has allowed me to do is to avoid learning the Orient tools. These devices have tons of controls, and are an indespensible part of any CAD user’s desk. A little spendy maybe, but check eBay if you’re on a tight budget. So enough about spaceballs. I like hotkeys especially for view orientation commands that you tend to use very frequently, so I’ve listed all the hotkeys for the view commands that I could find. One thing that surprised me was that Edge does not allow any single letter hotkeys, such as say F for Fit. (Solid Edge uses double middle mouse button click for Fit, and drag mmb for rotate). Works does allow single letter shortcuts, but Works also has conflicts with accessibility shortcuts (underlined letters in drop-down menus) and other interface bits that use text. Anyway, just to say that it makes sense that Solid Edge, with a better thought out interface has avoided some of the annoying conflicts that Works just walked right into. Yes, single letter shortcuts would be nice, but not at the expense of interface conflicts.

There are a few additional keyboard-only commands as well:


And then there are some neat functions I came across:

With this option turned on, any time you select a flat face, Solid Edge rotates the window so that the face is parallel to the screen. It stays active until you start another tool or you press ESC. This is very handy, although I think I would assign a hotkey to it to be able to turn it on more quickly.

Ok, I confess. I don’t get this one. You click on the Spin About tool, then click on a planar face to place the Steering Wheel, click on an arrow of the SW to spin about, key in a rotation amount, and press Enter to rotate by that amount. Whew. Ok, I guess there’s no other way to do that.

This is one I had been looking for, but it doesn’t do exactly what I had hoped.  Previous View, or Alt-F5, toggles between the current view and the previous view. In Works, this kept going back until it couldn’t remember views any more, more like “undo view change”.Still, this is a cool tool and one that I will use more now that I know where to find it. Oh, this one is very cool. It takes some practice, but you can do just about anything with the Common Views tool. When you click on the tool, the window to the right opens and stays open until you invoke another command. You can click on the dots or the arrows on the little diagram to make the model rotate. Hovering your mouse over the dots, triangles or arrows causes little tool tips to show up in the area on the right hand side. This would benefit from a little push-pin so you could keep it open all the time, or better yet, make a part of the status bar dedicated to this tool. Maybe I’m just easily entertained, but this one is a hidden gem . Yeah, baby, this one just got Ctrl-W hotkey assigned to it. Love it.

These two seem to go hand in hand. Save a current view, and then access it with the View Manager. This works ok, but it’s a little clunky. You should be able to get back to the view by double clicking rather than select a view and click the Apply button. This is one of those interface bits that could use some updating. Nice functionality, but it could be easier to use. Sketch View is actually one I use already. Ctrl-H to reorient the view so it’s looking square onto the active sketch plane. Very useful.

So, that’s what I know or was able to figure out. How many things did I miss?

This article first appeared on the Siemens Digital Industries Software blog at https://blogs.sw.siemens.com/solidedge/view-orientation-tools/