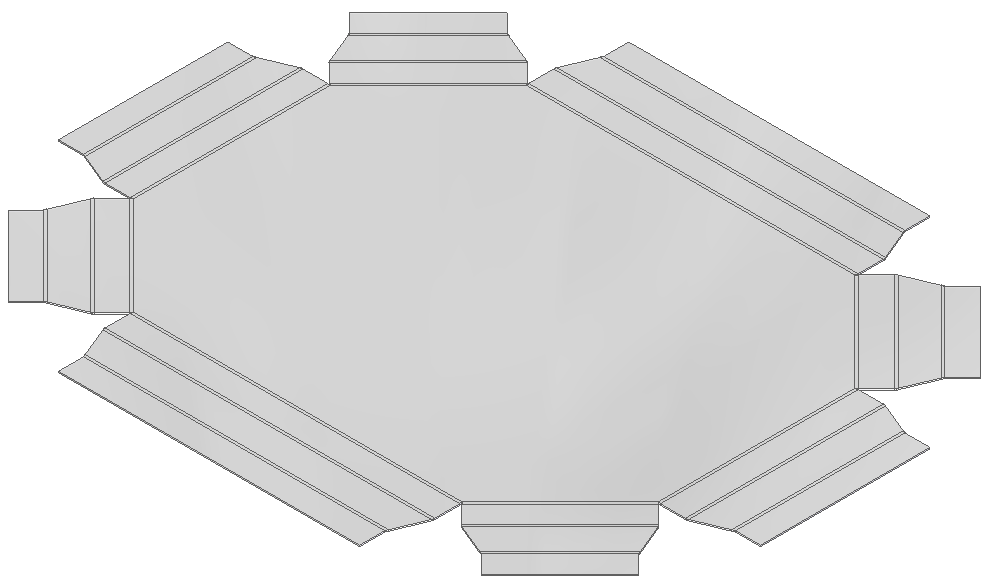 Solid Edge ST7 has added a couple of real breakthrough features in sheet metal. The first one is called Blank Body. The name might need some explanation. This function takes a stamped part and flattens it. The flat shape is the blank. These are parts with geometry you can’t create on a brake press. Solid Edge achieves this with finite element method meshes.

Part of the interface for this feature enables you to set the accuracy on a range from 1 (coarse) to 10 (fine – size reflects the size of the mesh). The accuracy affects the shape and also the solve time. Simple parts like the one shown here will solve in less than 10 seconds on a reasonably recent computer. Generally this has been the realm of pricy third party software, which is why it’s a bit of a break through to see Solid Edge do this directly. It’s not quite progressive die, which you might need to actually create your parts, but if you can make the part in one hit, this tool may help you simplify your process. If what you really need is a set of progressive dies, that will still be the realm of third party packages. Also it might be a good idea to recreate an existing project where you already know what the blank shape should be so that you can calibrate the precision of the Blank Body tool to your existing process. The second ST7 Sheet Metal feature that I want to mention here is the Part To Sheet Metal function. This one starts with a solid body, and will thin wall it, rip the corners, add bends, and flatten it. The result is a sheet metal part that can be produced on a brake press. The part shown below is an example of a simple part where this process was used.

Part To Sheet Metal is only available in ordered mode.

Solid Edge 2022 Launch Recap: A CAD Expert's First Reactions… October 15, 2021 Read CAD software expert Tushar Suradkar's recap of the Solid Edge 2022 launch and what he has to say about…
Designing precision fabricated products at Mezco Fabrication April 25, 2022 I met with Bryan Lagrange from Mezco Fabrication recently at our offices in Huntsville. Bryan has been a long-term user…
Solid Edge Startup Spotlight: Flying through virtual worlds… March 10, 2021 During his time at the MIT Media Lab, Patrik Künzler came up with the idea of developing a chair that…

This article first appeared on the Siemens Digital Industries Software blog at https://blogs.sw.siemens.com/solidedge/two-sheet-metal-wonders/