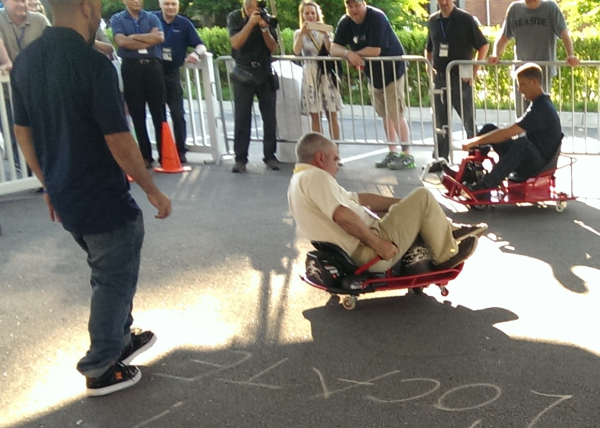 As soon as it’s started, it’s all wrapped up. I have to start by thanking all of you that read this blog. Several people came up to me during the event and thanked me for writing, just letting me know that the effort going into this is appreciated. Thanks to all the readers – those who leave comments, and those who just lurk. A blog is nothing without readers.

Now that SEU is behind us, I can stop pleading with you to come, and start telling you about what you could have learned had you been there. Since Dan showed ST7 publicly, and we have the web page up (you gotta check out this website if you’re interested in ST7), I can write about the new features more freely here. Like last year, I’ll also go through some of the presentations from the event and comment or highlight various items that I think are interesting. I may invite the presentation authors to join me in discussing the topics as well. There are tons of things we can do to make the technical stuff both informative and interesting.

Certification. Yes. It happened. There were two certification sessions at SEU14. A fair number of folks took the tests. There is no official word on who will be our first certified users, but the news will come out shortly. This is the ground floor of a program that is going to grow. You’re eventually going to want to be part of this. The initial test was fairly low tech, but the process will develop into a modernized system that is accessible and valuable to professionals, employers, students, and educators.

Yes, I took the test. While I’m certain I didn’t pass, I will set it as a goal to pass it within the next year. I really felt like I needed to know what the test was all about, so I took it even though I knew I wasn’t really ready for it. I don’t think I have too far to go to be able to pass it. I need to gain some credibility here with some Solid Edge chops. DownUnder Blunder. Rick Mason put together a great contest. In the end, no one actually finished in the time allotted, but from the results, it looked like at least one person was very close. The winners were

Thanks again to Rick Mason for putting together this year’s contest. Stratasys printed out the models as trophies for the winners. Community awards. Karsten Newbury gave out community awards at the end of the event to several people who have really helped the community to grow. I need to call these people out publicly and thank them for their efforts. Some of the awardees were not in attendance, but the four in the photo to the right were.

Of course making a list is a terrible thing to do if you make a mistake and leave someone off of it, and I’m sorry if I’ve done that. I did exclude reseller partner employers. Imre Szucs was not mentioned on the main stage because he works for a reseller, but after having a couple of conversations with him here in Atlanta, he has definitely earned his place on this list. Jason Newell is also a partner of sorts, but he has also put in an immense amount of his own time, effort, and saint-like patience to make things happen on the developer side of things that would have simply never happened without him.

Guys like Ken Grundey and Sean Cresswell are answering questions daily. Without this sort of dedication, this place would quickly fade into irrelevance.

Tushar Suradkar is a more recent rising star in the community, but his efforts in the forum and especially on the blog have made a direct impact on our members.

Not only do the people who answer questions deserve a lot of credit, but there would be nothing to answer if there were not community members who ask questions. So “thank you” to those of you posting questions. For everyone who asks a question, there are 10 people lurking, wondering the same thing. So don’t be shy. The great thing about a forum that reaches a lot of people is that someone knows the answer to your question. The live Solid Edge University event is over for this year, for we can get much of the benefit of coming together from this online community. Thanks to everyone who helps make it a useful and even fun destination for all things Solid Edge.

This article first appeared on the Siemens Digital Industries Software blog at https://blogs.sw.siemens.com/solidedge/the-community-at-seu14/