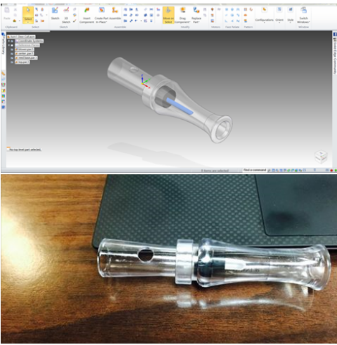 Has this class influenced your career choices?
The class has enabled me to narrow my focus in my career choice.

Where and how did you learn to use Solid Edge?
I started learning how to use Solid Edge in class and outside due to the enjoyment I gained from using it.  At first we learned the basic controls from trial and error; then we were given instructions for how to build a bird house using an ST4 manual.  As we are using the ST8 software, there was a bit of a learning curve considering we had to “translate” the old manual to the new software.

What do you like best about Solid Edge?
The best thing about Solid Edge to me is that you can simulate real world situations without the need for wasting real materials.

What have you learned about engineering or about Solid Edge during this class?
I’ve learned a lot about engineering in the time that I’ve been in IPT (Integrated Production Technologies).  For instance, whenever I go to a store of any kind, I don’t see just products on a shelf; I see all the time it took to design, calculate prices, and market the product.  I think most people tend to overlook all the work that went into something that they see every day.

Who has most influenced you academically?
The person who has influenced me the most academically is probably Nikola Tesla, because he was an extremely intelligent person that didn’t back down even when his predecessor was against him.

Women in Engineering Day Spotlight: Interview with Yossra… June 23, 2021 Meet Yossra Gherairi, a sales engineer at DigiCAD and standout Olympic fencing champion. She shares with us what it's like…
Problem solving vs. finding answers starts in high school May 24, 2022 Engineering has been a major in universities for centuries, but for as long as humans have been on Earth, we…
Developing tomorrow’s engineers: Siemens partners with ReDI… September 14, 2021 Amid the pandemic, digitalization has become more important than ever. We've come to realize that digital skills have become critical…

This article first appeared on the Siemens Digital Industries Software blog at https://blogs.sw.siemens.com/solidedge/student-spotlight-kyle-crowder/