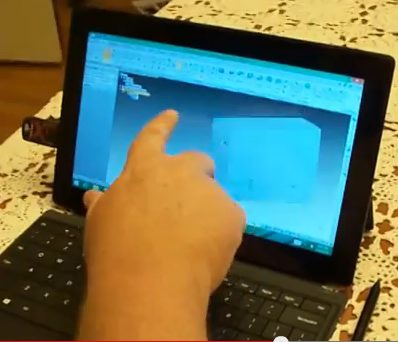 One of the key pieces of hardware at Solid Edge University this year was the Microsoft Surface Pro 2. I’ve been a fan of the Surface Pro since it was released a year and a half ago or so. It has all the power of a real laptop in the size of a tablet. It even has a real keyboard you can use for real typing. Being a guy who types a lot, that part is important to me.

The Surface Pro 2 figures in to Solid Edge University in a couple of ways. First, one of the hands-on rooms was populated with Surface Pro 2s. Second, ST7 has a couple of new features aimed directly at tablet-type operations.

The following short video shows me doing a few simple functions on the tablet with fingers and with the pen (stylus).

The Surface Pro isn’t a device that you would want to use all day for CAD, with it’s 10″ screen, but it is highly portable, is bigger than your phone, and is powerful enough to do parts and drawings. You can use it with or without a mouse.

Also, Windows 8 is going to be a divisive feature of this piece of hardware. 8.1 has added back some of the functionality that you might miss. Business users aren’t much excited about the tiled interface (Metro), and I can’t truly pin down any single function of Windows 8 that I prefer over Windows 7. The portability and overall practicality of its small size and powerful-enough-to-be-productive design are what sold me on getting one of these. I also wanted to believe in the “one experience across all devices” mantra, integrating Windows Phone operating system, but there were enough limitations with the phone that I couldn’t drop my Android to go there.

Anyway, cool hardware, useful tool, and now can run Solid Edge with even more capability than before.

This article first appeared on the Siemens Digital Industries Software blog at https://blogs.sw.siemens.com/solidedge/st7-microsoft-surface-pro/