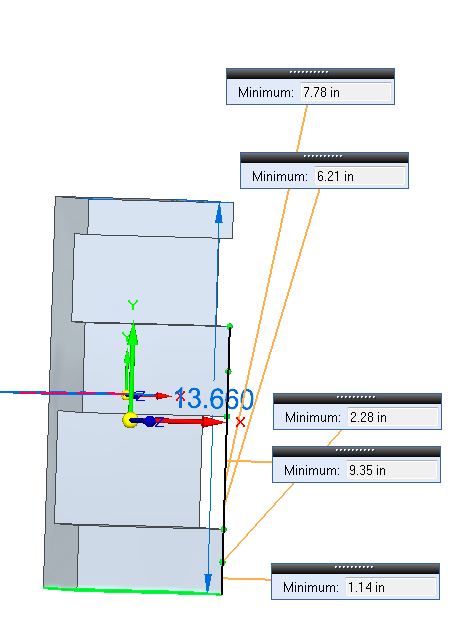 I will admit to struggling with a couple of things in Solid Edge, and measurements on the 3D model have been one of them. Until now. In ST7, a new set of tools for measurements of the 3D model have been added. They’ve combined the functionality of the previous 3D measurement tools along with the new stuff, so you won’t be missing stuff that you got used to using. By the way, I see this theme again and again in new Solid Edge features: they don’t sacrifice what already works to add new functions that are untested by real CAD users hammering on it. You can find the new tools on the Inspect tab, shown to the right. You can set the options so you don’t get overwhelmed by results. You can also limit the types of elements that you can select, so you’re filtering your input and output.  If you try it out for the first time and get frustrated because the cursor won’t select something you want to measure from/to, just make sure you have the element type filter set the way you really want it. For example, if it is set to planes, you won’t be able to select sketch keypoints. Another really nice thing is that the Measure result dialog can essentially be pinned open such that after you’re done measuring with the tool, the results remain visible. You can double click a number and Ctrl-C, then paste it into a dimension box.

If you have multiple coordinate systems in the current document, you can also specify which of those you want to make your measurement in. Overall, this is a fantastic tool. There are so many options and controls, that you should be able to make just about any type of measurement that you can think of.

If I had to make a criticism of the tool, it would be that the visual presentation of the results isn’t always perfect. For example, I used the Common Origin Measurement option to make the measurements shown below. Using this, I measured 5 points from the base of the block.

It measured them all, and got the leaders to the midpoint between the two measured items. But they aren’t arranged in the best order, and may be difficult to read for complex measurements. You can manually rearrange the flags. Also, it’s important to keep in mind the difference between measurements and dimensions. PMI dimensions drive or dynamically measure items, and stay with the model, looking like dimensions you’d find on a drawing. But the measurements are read-only numbers, and presented more like a temporary callout than a dimension with leaders, dimension lines, extension lines, arrows and such. Just thinking about possibilities here, wouldn’t it be cool if they had an option to convert a measurement to a Maybe its me learning stuff I should know already, but the ability to reset the measure interface with a right click is really nice. Of course I’m going to have to break myself of the bad habit of using ESC for everything in order to take advantage of that. The Measurement Variable is intriguing, but it is normally grayed out, and I wasn’t able to get it activated. The Help merely states that you can add variables to the Variable Table without saying how or when or why, or if there are any pre-selection conditions.

With all of the measurements, options, and controls, this is really a fantastic Measure tool. The good news is that there is still some room for improvement, but wow, they’ve delivered a lot of functionality that is going to take some time to digest.

This article first appeared on the Siemens Digital Industries Software blog at https://blogs.sw.siemens.com/solidedge/st7-3d-measure/