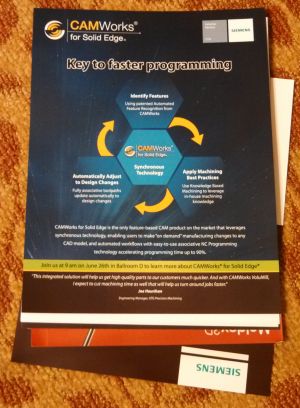 My first Solid Edge University as a Solid Edge employee has begun. Whatever I expected it to be, this is more. First of all, it’s bigger. More people, bigger facility, more sessions, bigger personalities. I know more people, more people know me.

This morning’s keynotes were great. I’ll get into each with more detail later, Engineers Without Borders and the Mars lander were both compelling stories, which I’ll get back to. Chuck Grindstaff’s presentation drove home that the Siemens guys have a practical approach to customers. Mr. Grindstaff is over all Siemens PLM. It’s comforting to see the guy at the top with a reasonable vision. CAMWorks for Solid Edge (CWfSE???) was officially announced as an integrated CAM solution inside Solid Edge. This is from Geometric, the guys who created CAMWorks. This has been a lack in Solid Edge for a long time. There are arguments for and against integrated CAM, but the addition of  a tool like this can only be a good thing.

Another partnership that was announced was with Keyshot, a rendering package. I’ll have more details on this later. It sounds exciting, especially fro product design people who want to do more with nice rendered images.

There are lots more things coming, including a What’s New for ST6 and an interview with Karsten Newbury.

This article first appeared on the Siemens Digital Industries Software blog at https://blogs.sw.siemens.com/solidedge/solid-edge-university-in-progress/