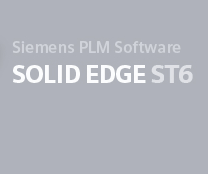 There have been a fair number of questions about when Solid Edge ST6 would be announced. I’m just getting on the distriburion lists around here, and although this news is a week old, some of you may not have heard yet. The following info comes from  Fred White of support:

Solid Edge ST6 released to manufacturing on 07/19/2013. Solid Edge ST6 will be delivered automatically to customers with a current Maintenance Contract. Based on current schedules, English maintenance kits should begin shipping early August, and additional Languages will follow in the coming weeks.

Solid Edge ST6, English 32-bit and 64-bit are available for download from:
https://download.industrysoftware.au…m/download.php.

Just as a reminder, the download folder is going to say “32 bit” on it, even though it contains both 32 and 64 bit. Keep clicking, and you will find both versions available for download.

There have also been some questions about the student version of ST6, which I’ve been told will be available “this summer”.

Solid Edge 2022 Launch Recap: A CAD Expert's First… October 15, 2021 Read CAD software expert Tushar Suradkar's recap of the Solid Edge 2022 launch and what he has to say about…
Increase Engineering Productivity with Computational… March 16, 2020 Frontloading CFD, moving simulation early into the design process, helps your engineers examine trends early and eliminate undesirable design options…
Solid Edge Startup Spotlight: Flying through virtual… March 10, 2021 During his time at the MIT Media Lab, Patrik Künzler came up with the idea of developing a chair that…