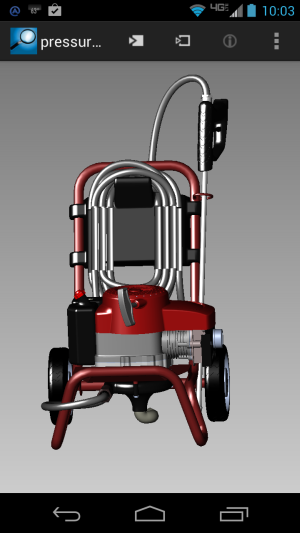 e Solid Edge Mobile Viewer for Android was first released, it was only intended for Android tablets. A discussion on the Solid Edge Community Forum (now into its 6th page) turned into a demand from users for something they could use on their phones. “The best device is the one you actually have with you.” And who carries tablets around at work?

It didn’t take long to make a few simple changes, get a few beta users together, test it out, and get it back out on the Google Play Store as something we all could use. So if you have an Android with 4.0 or later, this free app should run on your phone.

In case you’re skeptical about how useful a CAD viewer is on a phone, first, it is extremely fast. You won’t believe you’re not on your w

orkstation, it’s that fast, at least on my year old Moto Razr HD maxx. Second, it uses a special file format (*.sev) in which you can output parts and assemblies from Solid Edge ST5. For draft documents, you have ST6 MP1. Use the Save As > Save For Tablet command. And third, it’s just cool to be able to rotate and zoom nice looking 3D CAD models on a device that fits in your pocket. I mean, these things have all this power, it’s nice to finally have something that makes use of some of it (other than games).

To address some of the negative comments in the reviews, it sounds like people don’t understand that you need the special format file for the viewer. Also, to open the files, you can either put them in your Download folder and they will show up with the samples, or you can just open the file from email or Dropbox and the Solid Edge Mobile Viewer will come up automatically.

It’s a great little tool that I’ll always carry with me, even if I don’t have my laptop. Thanks to Dan, Laura, and the gang for this! I know the guys on the forum are happy.

This article first appeared on the Siemens Digital Industries Software blog at https://blogs.sw.siemens.com/solidedge/solid-edge-mobile-viewer-now-for-all-android-4-0-and-up/