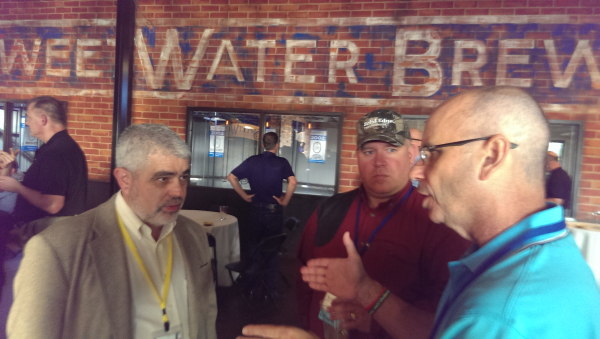 I’ve heard several nice things from attendees this year about the event. I have to say that it seems to have the feel of a higher quality event than prior years. Maybe it’s the gigantic displays behind the main stage, or that a bigger room appears to be full of people. Maybe it’s that we are all in closer contact with the event sponsors for every meal in a setting that encourages circulation. Maybe it’s that the venue is doing a good job of providing wi-fi access for everyone without gouging for the service.

This morning of course we started with the keynote sessions. Ali Kermani was great in a way that I have to say I didn’t expect. He had a great story of a great product idea that kept meeting with”no” and inaction, and bad decisions. It took a long time and a lot of failure, and a fair bit of risk taking, and some simple observation of how a caster wheel at an angle to the ground worked as opposed to when it is straight up and down. The CAD is often the easy part of the project.

Dan’s presentation of What’s New in ST7 was very well received. If you were in the twitterverse this morning, you were probably flooded with #seu14 tagged data. Some of my favorite enhancements are primitives, quick view cube, fixed length splines, 3D sketech, new templates organization, better installs related to standards, new units management, new materials tables, new holes interface… this is all stuff I’ve complained about in the past, and it’s fixed. Solid Edge still does CAD.

Part to sheet metal, flatten formed parts, 3D measure. Keyshot built in, ordinate dimensions, and some new component copying for irregular patterns.It’s hard to say just what was the best stuff. So much of this stuff will be very appreciated.

And then Dan didn’t even scratch the surface of what’s new in ST7. I’ll be cruizing the what’s new PDF and writing about various topics. But the day kept going! I attended a session by Jeff Walker (sporting the sky blue team shirt to the right) showing some more detail of what’s new in ST7. The hole feature looks really nice. Also attanded a session on the new 3D sketch tools. Solid Edge has totally leap frogged ‘Works in the 3D sketch area with this realease. The tools for sketching on planes, and sketching with entities like arcs and circles are so much better in ST7 than in Works. They have some additional features that will be added in ST8, like point, and maybe helix, or some sort of integration with Keypoint Curve. The presenter (Rahul) seemed to indicate that at some point there may be no reason to maintain separate functions for 2D and 3D sketches.

And then of course Rick Mason’s contest… I’ll have to report the results tomorrow. Just to make sure you come back – the results won’t be what you expect. As if all of that wasn’t enough, for dinner we went to the SweetWater brewery. Great barbecue – NCarollina vinegar sauce on the pork was really excellent. The beer I thought was so-so. Just a mini rant here, off topic to boot, but breweries that think that undrinkably hoppy coffee-grounds-mixed-with-cigarette-ashes flavored beer is what people want. 5 different colors of beer that tastes pretty much the same. The wheat beer was as bitter as many IPAs, with an aftertaste of wet grass. Somebody drinks their stuff, they make an awful lot of it.

We got a tour of the brewery which was interesting. Some of their equipment was designed in Solid Edge, which was the whole link here.

Above we got a picture of a serious conversation about how to communicate about Synchronous Technology with customers. What dedication! Even at the brewery we were deep into it, trying to make it all better for you. Such sacrifice.

Anyway, today was a great day to be an Edger at SEU14. Lots of great development happening with the product, tons of great information given out, and access to the mucky-mucks, who really are on your side.

Solid Edge Startup Spotlight: Flying through virtual worlds… March 10, 2021 During his time at the MIT Media Lab, Patrik Künzler came up with the idea of developing a chair that…
Sophia Valentine cuts a clear path with a CNC plasma cutter… February 16, 2022 Discover how 20-year-old Sophia Valentine uses self-taught sketching, 2D CAD, sheet metal and welding skills to operate a CNC table…
Problem solving vs. finding answers starts in high school May 24, 2022 Engineering has been a major in universities for centuries, but for as long as humans have been on Earth, we…

This article first appeared on the Siemens Digital Industries Software blog at https://blogs.sw.siemens.com/solidedge/seu14-full-steam-ahead/