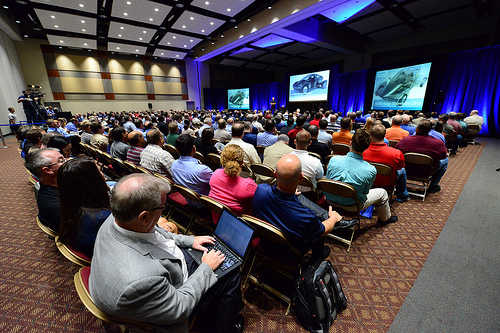 One of the best things about Solid Edge University is that its a great time to meet people you might never meet otherwise. This is the kind of thing you can’t put a value on, and it could add so much to your current understanding of the software or a particular industry, or anything else you might be interested in.

For example, after the reception Monday night, I ran in to Brad Holtz in the hotel lobby. We may have met before, but we’ve never really talked. I introduced myself, and he talked to our little group for quite a while. Guys like us don’t get to talk to guys like Brad every day. I know I gained a bit of insight into how the engineering software world gathers data, and finds valuable information from it. And it mostly doesn’t resemble how I imagined it was.

Then after I gave a presentation where among other things, I gave my best definition of the word “topology”. Google notwithstanding, finding a good workable definition of topology that you can present to other CAD users is not easy. I called it the combination of the number and types of faces in a model. As I was leaving the room, some old guy came up to me and said “Your definition of topology was wrong. You need to include connectivity between faces.” It is so easy to blow off criticism, especially from anonymous strangers. But let me warn you about that – when Ken Versprille (the father of NURBS) offers you a little advice, you’d better recognize it as the gift that it really is. Fortunately Ken had a name tag on, and avoided making a fool of myself. It’s great when a guy like that takes time to talk to people who can really benefit from their knowledge and wisdom. I’ve also met or spoken with other folks of some consequence in the CAD world, like Roopinder Tara, Ralph Grabowski, Chad Jackson, and Jim Brown. Also many prominent Solid Edge users like Ken Grundey, Matt Johnson, Dave Ault, Bob Miletti, Luc Poulin, Rick Mason, Steve Lussier, Billy Oliver, Dick and Eric Gebhart, and lots more I’m going to pay for forgetting later on. I’ve also talked to dozens of resellers, 3rd party people, old SolidWorks friends, end users, and many other industry people whose names I don’t remember. There were even SolidWorks users and ex-employees like Jeff Mirisola, Larry Moore, Steve Webb. And then of course there are all of my new coworkers from Solid Edge. Having such ready access to all of these people just walking around the halls with everyone else is really valuable for end users with questions or comments. Thanks to everyone who stopped me in the hall or at the aquarium, or in the hotel, or at lunch or where ever to talk or just say hi. Meeting all of these people has been fun and important. I’m not just name dropping here. Nor am I trying to annoy people by forgetting their names. My real goal is to encourage you to do what needs to be done to add your name to one of these lists for next year or even this fall at the Productivity Summits. Get the value from meeting these other people. Bring your ideas, bring your models, bring your questions. Attend round table sessions. Get access to influential SE employees. You learn a lot. You gain access for your company, and it’s a lot of fun along the way.

Sophia Valentine cuts a clear path with a CNC plasma cutter… February 16, 2022 Discover how 20-year-old Sophia Valentine uses self-taught sketching, 2D CAD, sheet metal and welding skills to operate a CNC table…
Solid Edge Startup Spotlight: 120km range, up to 6kg payload… March 7, 2021 Tom Plümmer is the co-founder of Wingcopter, an aviation startup from Darmstadt that has dedicated itself to the subject of…
Solid Edge Startup Spotlight: Flying through virtual worlds… March 10, 2021 During his time at the MIT Media Lab, Patrik Künzler came up with the idea of developing a chair that…

This article first appeared on the Siemens Digital Industries Software blog at https://blogs.sw.siemens.com/solidedge/seu-the-people/