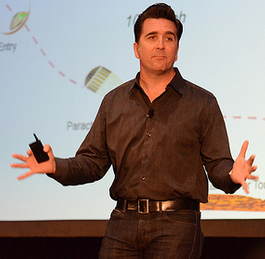 There were four keynote addresses at SEU13 that I want to summarize here:

Chuck Grindstaff has taken over the CEO position from Tony Afuso. It was his job to make the high level corporate stuff interesting for the general Solid Edge user attending the SEU13 general sessions. I’ve found Mr… Grindstaff compelling in some of his recent interviews comparing the visions of the major CAD producers. There are a couple of slides I want to share, and of course one is the obligatory exponential growth chart.
That type of growth and that many conversions are an important signal to customers that this is a company on the upswing. (If you attended SEU13 and handed in your questionnaire at the end, you received all these presentations in PDF format on a memory stick.)

The second slide I want to share is one that shows a bit of the corporate philosophy. The Openness and Investment Protection portions of this slide were the most important to me. Openness contrasts in part to competitors who don’t give access to the complete API, even for developers. This was highlighted by Geometric (developer of CAMWorks for Solid Edge) who found SE much easier to deal with than some of the other vendors for whom they have developed products because of the depth of the API support.

The Investment Protection chart is one I’ve written about before. Siemens PLM does not periodically rip the rug out from under customers. When they have new technology, it gets integrated in a way that doesn’t disrupt your productivity. This shows a lot of respect for customers, and the investment they’ve made in Solid Edge tools.

Karsten had the job of fitting somewhere in between Grindstaff’s high level presentation, and Dan Staples’ talk about what’s new in the product later on. The title for his presentation was “Great CAD that Fits YOUR Business”. I thought this was very appropriate. First, he recognizes what what customers of mainstream engineering products primarily need is a CAD tool. And they want it on their terms, not on the vendors terms. (And by the way, Karsten also announced an on-line Solid Edge store where you can rent Solid Edge on a monthly basis – available in August, with limited beta now).

This photo I think sums up what some other vendors are missing about the CAD market, and about technology markets in general. Customers need Control, Choice, and Options. This came up with respect to a discussion about cloud delivery. Solid Edge will always be available as a desktop application, but customers may at some point be able to serve it from an Amazon cloud server, or from a local server. This is of course in addition to the desktop option, which is the most viable for most mainstream engineering customers.

Siemens PLM acknowledges that security is an important factor in cloud installations, and Siemens AG, the  world class manufacturer does not put its design data on the cloud, so they will not expect you to either. This is common sense talk about a topic that has gone way out of hand, in my opinion.

Karsten also announced the existence of the new Solid Edge Community, which you already know about, since you’re here. This will continue to grow into a resource for convenient help and learning. Also, the GTAC forum will migrate to this new platform. Engineers Without Borders challenges engineers to “Do Well by Doing Good”. Dr. Amadei cited third world locations without access to simple life necessities like running clean water, or access to medical assistance. Sometimes the needs are simple, but seem unattainable. How do you pump and filter water when you have no power source? How can you transmit medical advice through the jungle quickly enough for it to make a life-and-death decision? These are questions that engineers can help solve at minimal cost. Once you provide basic life necessities, you might enable 20 children in a village to attend school instead of carrying water. You might provide a livelihood for disabled villagers who might otherwise have none.

If doing this kind of work interests you, stay tuned, and drop me a note. I am going to try to bring a project or portions of a project from EWB to the Solid Edge Community. These projects are similar to some of the CAD Challenges I used to run on a different site, and being able to help others while helping yourself learn the software can only be a good thing. Adam was a bit of a rock star. Anyone who has designed stuff that has landed on another planet is a rock star in my book, but he also had that look. Plus, he really was a rock star, in a literal sense.

Adam’s story about coming up with a crazy idea and actually making it happen is the kind of stuff that engineers everywhere with more mundane jobs all dream of. They launched it into space on a rocket, and landed it on a spinning rock far, far away. If that isn’t cool, I don’t know what is.

The process of elimination that led them to heat shield atmospheric entry, then a Mach2 parachute, then thrusters, and finally lowering the rover on cables seemed like a set of research projects just to prove that other tested methods wouldn’t work.

So what kind of thing does a guy who’s sent stuff to Mars dream of? Of course, sending stuff to Europa, a moon of Jupiter, the most likely spot in this solar system to find life.

The keynotes all set the stage for what was to be a really great Solid Edge University. From the altruism of helping others to the lofty goals of dreaming of space, and back down through the reality of making better decisions about your tools and products. Events like this are all about two things – the improved you that comes back with a head full of ideas, and the new friends you make that help you along the way.

Women in Engineering Day Spotlight: Interview with Yossra… June 23, 2021 Meet Yossra Gherairi, a sales engineer at DigiCAD and standout Olympic fencing champion. She shares with us what it's like…
Problem solving vs. finding answers starts in high school May 24, 2022 Engineering has been a major in universities for centuries, but for as long as humans have been on Earth, we…
Startup Spotlight: Speedbird's new drone design takes… August 2, 2021 It’s a bird. It’s a plane. No, it’s a drone—possibly one of Speedbird Aero’s drones en route to deliver pizza or medicine.…

This article first appeared on the Siemens Digital Industries Software blog at https://blogs.sw.siemens.com/solidedge/seu-keynote-addresses/