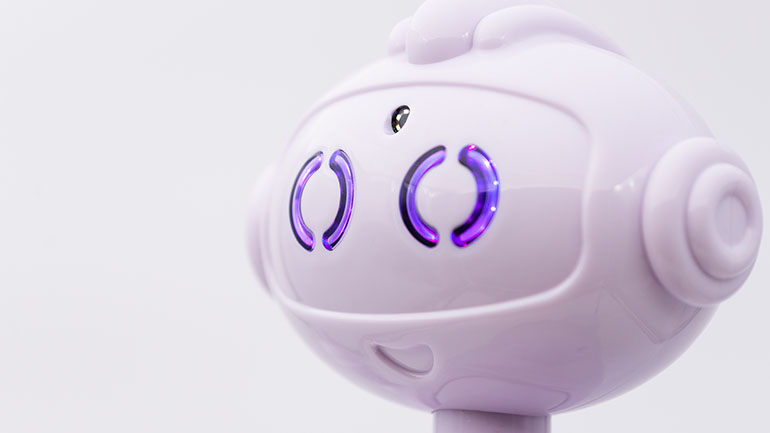 In many ways, ABii is just like a classroom assistant. She provides her students with step-by-step math and reading instructions and can adapt to their individual learning habits. She knows when a student isn’t paying attention and enjoys trading high fives for right answers. But in other ways, ABii is different. She stands at only fifteen inches high, has dazzling, purple lights for eyes and is packed with colorful wires. ABii is an intelligent robotic tutor, and she’s already revolutionizing learning for children in kindergarten to fifth grade (K-5).

Built from decades of university research in child-robot interaction and educational intervention, ABii is the brainchild of startup Van Robotics. This multidisciplinary team, made up of computer scientists, roboticists and certified educators, is breaking new ground in the fields of social robotics and Artificial Intelligence (AI). Since its founding in 2016, the company has focused on developing smart robot tutors to improve the learning process for K-5 children with cognitive, learning and developmental difficulties. Its flagship ABii robot personalizes math and reading lessons with fun social interactions, from fist bumps to dance parties. Able to work with any WiFi-enabled device, she also adapts her interactions with each student based on sophisticated machine learning (ML) techniques.

In addition to ABii, Van Robotics has a second robot tutor in development — MARii, a musical assistant robot that teaches older adults with mild cognitive impairment how to play the piano. Equipped with sensors to detect stress and frustration in its users, MARii uses music to improve the adults’ cognitive and emotional health. Clinical trials funded by the National Institute of Health (NIH) are set to begin for MARii this summer.

Moving Beyond the Screens

Today, ABii is used by thousands of children all around the world, including in over 30 states in the United States, England, Germany, Emirates and Qatar. And the results are in: In a 2018 efficacy study among Kansas, Alabama, New York and Texas schools, Van Robotics reports that 67 percent of students that tested below proficient in mathematics improved by an average of 34 percent after just two to three sessions with ABii. “Children naturally want to engage with robots,” says Laura Boccanfuso, PhD, Chief Executive Officer, Van Robotics. “With ABii, we wanted to make sure we were designing and engineering a robot that would work well with them.”

This engagement owes to Boccanfuso’s philosophy that robots are the physical embodiment of software, bringing more value to the learning process than traditional screen-based tools. For this reason — after first sketching her ideas for ABii on a napkin — she spent a lot of time thinking about the fine-tuning the robot’s design. “Our goal was to engage children in a way that goes beyond screen-based interfaces,” Boccanfuso says. “We appreciate that ABii is an engineered, physically embodied robot that can model scenarios for students in ways that aren’t possible with screen-based apps.”

Since that initial napkin sketch, it was critical for Boccanfuso to get ABii’s physical form just right. An advanced mechatronic package, ABii incorporates years of research in child-robot interaction. At 15 inches tall, the robot makes eye contact with children when placed on top of a desk. She has two degrees of freedom in each arm, as well as two in her head, totaling six. She is purposely larger than a toy — yet not too big that she intimidates students. She is also human enough to express emotions using the body language children are already familiar with — yet not too human-like that she is off-putting.

“We knew ABii needed to have a large head with large eyes and look pleasant — much like a familiar cartoon character a child would enjoy watching,” Boccanfuso says. “We also deliberately designed her for students that like to touch, move, hold, hug and carry objects. Having too many degrees of freedom in her arms and legs could make her prone to damage.”

In addition to her child-friendly aesthetics, ABii incorporates sophisticated software that leverages ML models, such as Bayesian networks, and predictive analytics to personalize her interactions with students and pace the lessons in a way that optimizes their learning process. What makes ABii truly groundbreaking is the fact that these ML models are constantly being trained using the behavioral data from the thousands of students already using her. “Thanks to this data, we can better understand the patterns of usage that are impacting student performance, which ABii can respond to on-the-fly,” Boccanfuso says.

This unique ability to train ABii’s ML models also enables the robot to respond to a student’s level of attention. For example, in combination with vision systems on both the WiFi-enabled device and on the robot itself, ABii can “understand” how well a student is paying attention. “Face orientation and gaze tell us a lot about what a child may be missing during a lesson,” Boccanfuso says. “ABii uses this data to repeat the things the student may have missed to fill in any knowledge gaps.”

Together, these two levels — performance and attention — enable ABii to pace each lesson and provide students with appropriate responses in real time. For example, if a student misses several problems in a row, ABii knows to apply extra positive reinforcement. If a student is lacking in attention, ABii knows to call the student by name. If the inattentiveness is chronic, then she may also lead the student through a brain break — stretching, breathing or, for smaller children, “wiggling it out.”

With her fun, bubbly personality, ABii is currently making waves in classrooms around the world, building both core skills mastery and confidence. To continue designing and developing robots that physically embody complex software and carry out increasingly sophisticated ML tasks, Boccanfuso knew she had to switch to the right CAD software — one that supports complex physical design. These tools would be key to her philosophy as the Van Robotics team moved forward with MARii — and beyond.

That’s why Van Robotics chose to shift to using Solid Edge CAD software for its robotic designs. Offering a suite of sophisticated, tightly integrated tools, Solid Edge encompasses mechanical and electrical design, simulation and data management, to name a few. An excellent choice for Boccanfuso and her team, this software enables design engineers to easily address design challenges that are unique to robotics, all while lowering costs and saving valuable design and development time in the process.

For example, Boccanfuso had to approach ABii’s electromechanical design in terms of child friendliness, and the robot had to pass a long list of child safety requirements for ASTM International certification. “ABii couldn’t have any gaps between her parts, and she had to pass six-foot drop tests twice,” Boccanfuso explains. “And in terms of ABii’s physical design, we had to make sure she could withstand being manipulated by students safely and still have robustness over time.” Addressing this issue, Solid Edge enables users to link and track key design requirements during the design and manufacturing processes. It also makes these requirements easily accessible to all stakeholders, ensuring the final product meets customer expectations and complies with important industry regulations.

Another design challenge for Vans Robotics involved maintaining ABii’s range of motion when modifying the body or head. “As soon as you begin to redesign the body, you can infringe on the robot’s range of motion, especially in the arms,” Boccanfuso says. “Any little tweak can create an interference, but with Solid Edge, we can now check everything in real time, which saves material and production costs down the line.”

Similarly, designing robots with large heads — as is the case with the child-friendly ABii — can create torque issues at the neck. With Solid Edge, engineers can easily iterate around these and other design challenges. For example, it lets users quickly and intuitively create and manage large assemblies, and it provides exact representations of all tubes, pipes, wires, sheet metal and other components. The software aggregates everything in a digital mockup for more accurate design and analysis, enabling users to:

Looking Ahead to the Future

A testament to Solid Edge’s user-friendly nature, Van Robotics was able to create CAD models of its new MARii robot in just a few weeks compared to several months. “Solid Edge is extremely intuitive,” Boccanfuso says. “We thought it would take us all summer to get our designers up to speed on using the software. But not only are they using it, they’ve already created models — all in the span of a few weeks. Compare that to our early working designs for ABii, which took us six to eight months to create.”

The design team’s next step as it develops and fine-tunes MARii will be to 3D print the first models later this year — a process that Boccanfuso is confident will be quick and painless thanks to Solid Edge. The software’s powerful design tools, along with its generative design and topology optimization capabilities, lend themselves well to the creation of light, complex and highly customized shapes for 3D printing. Boccanfuso also believes its iterative design, kinematic analysis and augmented reality capabilities will come in handy as Van Robotics continues to design, refine and develop new robots.

“We’re mostly a software company, but we produce physical robots that use AI to be as adaptive as possible for education,” she says. “Solid Edge will be critical for us as we push to the future.”

Originally published by The Robot Report

Sophia Valentine cuts a clear path with a CNC plasma cutter… February 16, 2022 Discover how 20-year-old Sophia Valentine uses self-taught sketching, 2D CAD, sheet metal and welding skills to operate a CNC table…
Developing tomorrow’s engineers: Siemens partners with ReDI… September 14, 2021 Amid the pandemic, digitalization has become more important than ever. We've come to realize that digital skills have become critical…
Problem solving vs. finding answers starts in high school May 24, 2022 Engineering has been a major in universities for centuries, but for as long as humans have been on Earth, we…

This article first appeared on the Siemens Digital Industries Software blog at https://blogs.sw.siemens.com/solidedge/robot-tutors-bring-machine-learning-to-the-classroom/