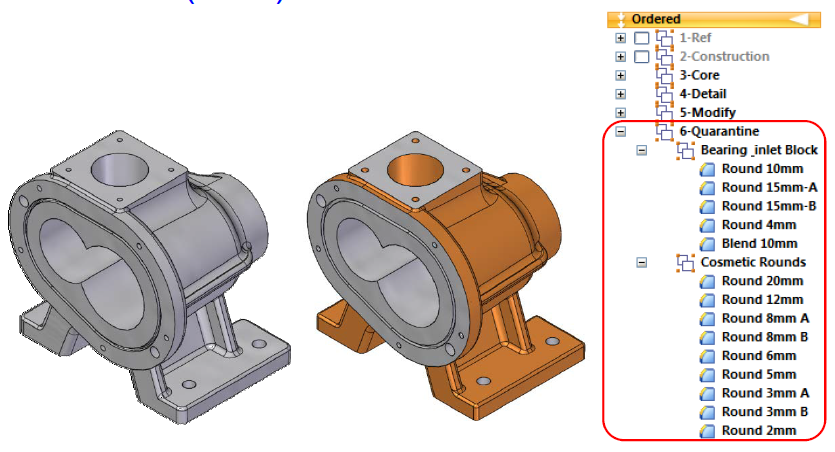 In June at Solid Edge University, I went to a session led by a guy named Dick Gebhard that dealt with Solid Edge best practices and a number of other ideas. Evan Yares has written a few articles  introducing this topic from a historical and academic point of view, but I want to approach it from the end user and possibly CAD administrator points of view.

Evan Yares’ articles were subtitled “The Failed Promise of Parametric CAD”. I do believe there is a failed promise here, but I think the failure is in history-based CAD. The failed promise comes from those demos we all watched in the 1990’s showing parts updating as dimensions changed. While its true that history-based modeling allowed us to make changes, its also true that it mostly applied to idealized cases. The promise certainly didn’t apply to the general case.

First of all what is “Resilient modeling”? Resilient modeling is a term that Gebhard and Yares came up with together to describe a method built on best practice, a standard format for the feature tree, and the idea that you should be able to change your models without the model blowing up, as so many of us have become used to over the years of running history-based CAD. If you want to read Gebhard’s powerpoint presentation, you can download it in PDF format here.

The aim of Resilient modeling is to make parts where the feature tree is organized in a stable format such that anyone could sit down with the model and understand how to make changes with it very quickly. Models built using this method can  be changed predictably without spending a lot of time understanding the dependencies between features.

He recommends you split the tree into several sections, grouping features by function:

He advocates using a check list instead of a “best practice manual”, because a check list is easily visible, uses concrete yes/no criteria, and its easy to see what needs to be corrected with a list.

Should You Use Resilient Modeling?

To me, this is where Synchronous Technology can step in and offer some real benefit. The magic of Synch is that you are not locked into any design intent until you make a change. You decide at the time of the change what your design intent is. Design intent is decided by one of two things in Synch: the selection, or the combination of the selection and the Live Rules. Live Rules is really just a form of automatic selection.

Mr. Gebhard is really trying to create a universal method that people with any kind of CAD software can use to create models that react predictably to changes independent of design intent, and it does that, but you can get even more advantage if you are using Synchronous Technology. The advantage you get with Synch is the ability to control design intent rather than simply ignore it.

He recognized this benefit of using Synchronous Technology as he was putting together his presentation for SEU, so at the end, he adds the recommendation that if you are using Solid Edge ST3 or later, even with older Ordered-only models, you can take all of your core and detail features, and push them to Synchronous, leaving the quarantine features in Ordered mode. This instantly takes what may have been a nightmarish history-based model and makes it Resilient modeling compatible.

Overall, I like the method, and it would certainly help the editability of many models. But it won’t work on models with complex surfacing.

On the other hand, I would not want to  be the CAD admin trying to enforce this on a system like SolidWorks, where even in the official training, the attitude is very much “if you can you should” – a seeming total disregard for best practice in favor of ease of use. Pro/E used to teach rather strict methods using some concepts that may have been similar to this. I would expect that older Pro/E users would have few qualms about adopting Resilient modeling.

SEwST, on the other hand, is built for this kind of thing. The main thing to remember would be to put rounds, chamfers, draft, surfaces, lofts and sweeps, as well as some other types of cosmetic features (such as extruded text) into the model as ordered, and all the rest of the prismatic geometry as Synchronous.

So to sum it up, Resilient modeling, in my opinion works best with Solid Edge with Synchronous Technology where your prismatic features are all Synchronous, and cosmetic/edge break type features are ordered. History-based users whose primary goals with CAD are speed or ease-of-use will probably resist this method because it takes some work up front, and makes you follow rules that don’t have immediate benefits. Users who are very consumed with the promise of automatic changes based on design intent and parent/child methods may also resist. The users who will find this method useful are those who are tired of rebuilding or repairing models after simple changes, users who don’t trust the automated changes, or those who simply prefer direct control.

CAD admins who oversee a large group of users with varying degrees of skills or large numbers of beginner users where there might be a lot of employee turnover may also want to implement a Resilient modeling sort of plan, since it ensures that if you have a basic understanding of the CAD tool, you’ll be able to edit just about any model.

STEM education leaders help Siemens prepare a new generation… January 27, 2022 Register now for free to join Stage Two's livestream and the Siemens Digital Experience powered by Scasa on October 29th.…
Solid Edge 2022 Launch Recap: A CAD Expert's First Reactions… October 15, 2021 Read CAD software expert Tushar Suradkar's recap of the Solid Edge 2022 launch and what he has to say about…
Women in Engineering Day Spotlight: Interview with Yossra… June 23, 2021 Meet Yossra Gherairi, a sales engineer at DigiCAD and standout Olympic fencing champion. She shares with us what it's like…

This article first appeared on the Siemens Digital Industries Software blog at https://blogs.sw.siemens.com/solidedge/review-of-resilient-modeling/