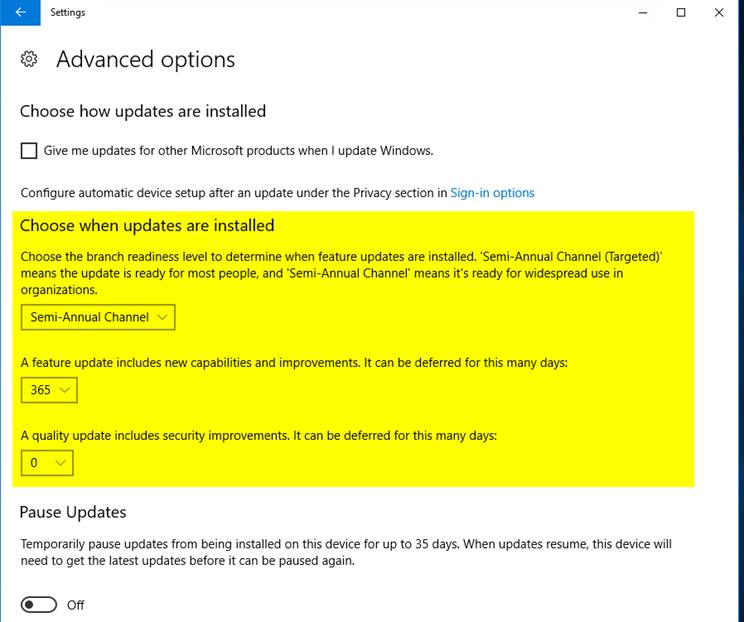 Warning: long post follows. TL;DR version: Understand Windows 10 as a service and how this impacts Windows Update so you need to change your default update settings to CYA.

As some of you may be aware, the recent Windows 10 Fall Creators Update released in October 2017, negatively impacted Solid Edge performance and usability. These issues were not a fault of Solid Edge per se. In fact any high end intensive graphics application was negatively impacted by the Fall Creators Update. This included our competitors’ software and even Microsoft’s own Surface Pro hardware.

However, this is not a post intent on revisiting the history and fallout of the Microsoft Fall Creators Update with Solid Edge. Nor is this a post intent on trying to pass blame, point fingers, or pass the proverbial buck. Instead this is a post intending to educate on Windows 10 and how Windows 10 is vastly different to any version of Windows that proceeded it and how these Windows 10 changes will impact your organization – as evidenced by fallout from this Fall Creators Update. Hopefully by providing this overview on Windows 10 Feature Updates, we can then understand how Windows 10 works such to potentially avoid, or at least to delay, any future fallout to our organizations when presented with future Windows 10 Feature Updates.

I should also add a few caveats to this post. I am not Microsoft certified nor do I have direct Microsoft knowledge on what follows. Everything below is based on my own investigation and subsequent understanding of Microsoft Windows 10 and how the associated updates process now works. Additionally, what follows is intended to be a lay-person’s guide and is by no means an in-depth brief of Windows 10 as a service. Nor is any of this being presented with my GTAC support hat on – this is simply me as a Windows 10 user sharing information about Windows 10 with other Windows 10 users and trying to outline Windows 10 behaviour as simply and as succinctly as possible without getting too in-depth and technical. (You should have seen how in-depth and tangled my previous attempts at this post were).

So here goes with what I think you need to know about Windows 10, Windows Update, and Feature Updates…

Feature updates are the equivalent of what used to be called version upgrades i.e. a new Windows version. These feature updates include new functionality and require a multi-gigabyte download and a full setup. Microsoft’s schedule is to deliver Windows 10 feature updates twice a year.

Feature updates are delivered according to “servicing channels”. In early releases of Windows 10, these were called “branches”.

By default, all Windows 10 computers are enrolled in the “Semi-Annual Channel (Targeted)” servicing channel, which was previously known as the “Current Branch”. For devices assigned to this channel, feature updates are delivered via Windows Update as soon as the feature updates are released by Microsoft.

Because of the enormous number of machines that receive Windows updates, Microsoft “throttles” update delivery to manage the load on the Microsoft servers. As a result, it may take several weeks for a feature update to roll out to all of the millions of devices in the Semi-Annual Channel (Targeted) servicing channel.

After Microsoft determines that initial reliability and security issues discovered during the first few months of release of a feature update to the Semi-Annual Channel (Targeted) servicing channel have been addressed, Microsoft then declares the current feature update ready for widespread deployment to the enterprise through the “Semi-Annual Channel” servicing channel, which was previously known as the “Current Branch for Business”.

As a feature update is a new version of the Windows 10 operating system, to avoid any negative impact of deploying a new Windows version throughout your organization you should review your Windows Update strategy.

Additionally, you should consider setting the feature update deferral period. This will allow your IT organization further opportunity to review and determine the suitability of the latest Windows 10 version for your company beyond Microsoft releasing the feature update to the enterprise through the Semi-Annual Channel.

Bottom line unless you want your company to be an early adopter (beta-tester?!?) for the latest Windows 10 operating system version [feature update], you better move yourself into the “ready for widespread deployment to the enterprise” category. I hope the helps to clarify Windows 10, Windows Update, and Feature Updates. If you wish to research further for yourself start with this Microsoft Windows as a Service resource.

This article first appeared on the Siemens Digital Industries Software blog at https://blogs.sw.siemens.com/solidedge/lets-talk-windows-10-and-feature-updates/