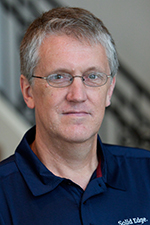 Ricky Black is an intense perfectionist with a background in manufacturing. He was a UG1 user, if that gives you a little perspective, and recently had his 30th anniversary working for the company in its various incarnations.. He’s been using CAD/CAM software since before many users were born, and has had a number of roles within the Solid Edge organization including instructor, applications engineer, software development, and now product planning. I had an opportunity recently to speak with Ricky about his field of expertise in Solid Edge – 2D and Drawings.

2D drawings are really something you create after you create the 3D model, so process-wise, there is a lot of work to be done before you start making drawings. But 2D is not limited to the draft environment, it is also involved in sketching, PMI dimensions, and annotations. And of course drafting standards. Ricky is adamant that good drafting requires good standards compliance. Standards is an area where we have seen several meaningful enhancements in the last couple of releases, and you can be sure he was behind those improvements.

With his background in running CNC equipment, Ricky quickly came to understand what is necessary to make a successful drawing. As we’ve seen with several of these interviews, a background in actually using CAD/CAM software and CNC setup in particular leads to heightened sensitivity around issues affecting users. Having been there and done that helps the Solid Edge planners intuitively define great features and functions that users need and want in order to get their jobs done more efficiently.

I asked Ricky about what some of his favorite enhancements that he got to work on for ST7:

I think the center of mass display in drawing views was an important one for a lot of our customers. People have been asking for that one for a while.

Live drawing view display during creation and modify helps users visualize what’s going to wind up on the page before you put it there. Just makes sense.

Users complain mostly about the time it takes to make a drawing pretty. We did some projects related to helping the user annotate the drawing more efficiently:

• This is an extension of previous projects for dimension alignment/groups/automatic-arrangement.

What kind of feedback have you had from the user community on the drawing enhancements in ST7 so far?

I have seen comments that this is the best release yet. They always refer to the drafting enhancements.

When you go to Solid Edge University, I love to watch the What’s New demonstration on the main stage. They take up most of the time showing part and assembly modeling – and they do have some great stuff in there – but when do you hear the loudest cheers? The audience really reacts when they start showing the draft enhancements. It’s just a measure of what’s really important, I think.

Without giving away anything in ST8, what are some new functions you’d like to see added to Solid Edge at some point in the future?

My initiative is productivity. I am doing all I can to make the user more productive creating drawings.

I hear comments in the market about Solid Edge being the ‘Drafting Guys’. Why is this?

I have a great team of guys working with me on the Drafting software. They pick up on the concepts and do a really good job of implementing them. I could not ask for a better group to work with.

There’s a lot of talk these days about “model based definition”, where the information traditionally on the 2D drawing is being put on the 3D model. CAD salesmen have been yelling about drawings being dead for decades. Do you think there is anything to this “MBD” push?

Most people use the ideas of MBD and PMI interchangeably. I agree that there is much talk about this. The problem is still the reluctance to go there by companies because the drawing becomes the contract. It is the paper trail of the requirements. Especially when you work with vendors, it is hard to convince the vendor to accept 3D content. It also forces the vendor to use the same CAD software. If you hand them a set of drawings, they have all the requirements.

Further, taking the shop floor drawing-less is just not going to happen at many shops. The floor doesn’t have access to the computer hardware, software or training to be able to take dimensions off of a 3D model. It’s a great idea, but it’s just not practical in a lot of places. Tablets get you a little closer, but cutting oil, chips, and delicate electronics really don’t mix.

From a drawings point of view, can you give us any insight into the Ordered vs Synchronous debate?Does one style support drawings more easily than the other?

Early in the decision process of synchronous development we created two model types. This was to have the least impact on the existing user base and to grow the technology with the least impact. There was also discussion about drawing creation and the need for two different draft file types (sync vs. ordered). The end result was still a single draft file. Things like retrieve dimensions is an ordered workflow because we get the dimensions from the original sketch. There is no sketch in sync. But, we have similar processes with Include PMI which retrieves the PMI dimensions on the drawing.

What is the most underused area of drawings?

That’s a loaded question. It really depends on the product the customer is producing and the way they want to present the product produced. One customer may create products that require many broken views because of the length of the components. Another customer may create multiple sections because of the complexity of the internal components. A customer may create plates with many holes and will typically use coordinate dimensions heavily vs. someone who produces cylindrical parts and relies heavily on symmetric diameter dimensioning. Again, it’s has more to do with what is needed instead of what is underused.

Thanks to Ricky for spending the time to talk with me, and also for all of those great enhancements to Solid Edge drafting. 30 years, can you believe it?!?

This article first appeared on the Siemens Digital Industries Software blog at https://blogs.sw.siemens.com/solidedge/interview-with-ricky-black-planner-for-2d-and-drawings/