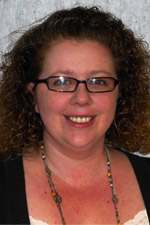 Melissa Schultz is a CAD admin who has lead her 70 some Solid Edge users through a transition to Synchronous. She gave a standing room-only presentation at Solid Edge University 2014 that has continued to echo through the Solid Edge community for the months since then. In this interview, Melissa shares with us some of the ups and downs of guiding an organization with a lot of inertia through such an important change to their tools and workflow. Her experience is one all CAD Admin types and users alike who have gone through changes will have no problem relating to.

The phrase “rock star status” still makes me laugh. I’m definitely amazed at what a big deal the presentation has become. Prior to the University, I was just hoping that people would attend my session. Having a standing room only crowd was definitely flattering. As far as knowing about it beforehand, the only hint I had was that the day before Dan Staples said to me that he was hoping to make it to my presentation. That was a clue that it was going to be a big deal.

It was just one session. I know some other topics had multiple sessions, but I just had one. And it was standing room only. And yes, Dan Staples did show up. I went up to him afterwards and said “You made me nervous”, and he just said “It didn’t show”. It was the first Solid Edge University presentation that I’ve given.

I did the presentation to help other people go through the transition to Synchronous. It’s not an easy thing to tackle. If I can help others make it through the process easier than I did, then I’m glad to help.

Your session attracted so much attention because of the rivalry of sorts that we see between Synchronous and Ordered modeling methods. People get very emotional about this because they have so much time and energy invested in learning. How did you confront this conflict among the large group of users that you transitioned?

The Synchronous to Ordered transition is a huge issue. These employees have worked hard to learn what they know. They put years into being able to create and edit Solid Edge ordered models. All of the sudden this pre-planning that they had become so good at didn’t need to happen any more. What’s really difficult is that for a highly experienced Solid Edge user, they are learning something that’s so vastly different from what they are used to.

I put myself in that same boat. Before I took on the Solid Edge admin role, I was a designer. A good ordered user. I couldn’t just jump into it and expect it to work. I had to first be open to learning. I had to explain to them that it was going to take some work. That it was going to feel different. We compared the transition to the change from the board to 2D drafting, and then 2D drafting to 3D modeling. I had to help them understand the benefits of the new method.

In setting up your program for change, who did you rely on for help and advice? Were there others who had already blazed this trail?

I was really leaning on my Solid Edge reseller, DesignFusion. They were where I was getting most of my advice. I’ve been to Solid Edge university, and I’d seen Synchronous Technology, so I knew what it was all about, but at ST2 or ST3 I still wasn’t ready to jump on board. But once I started to see it – to really get it, I could see that it was something that needed to be introduced to my Solid Edge users. I hadn’t used Synchronous myself in a production environment at that point, but my reseller was the one that had the experience, having had helped transition other organizations.

We hear a lot about hybrid modeling. Do you mix Synchronous and Ordered methods?

The combined modeling approach is definitely the best of both worlds. Synchronous with Ordered allows the users to take advantage of each of the paradigms and really gain efficiency. And who doesn’t want to be less frustrated? There aren’t many companies out there that tell their engineers “You just take your time, the customer will wait. You just do it your way.” Using Synchronous and Ordered is really the best way to go.

We had mandated that the users had to use Synchronous on everything unless it didn’t work. We had a list of situations where we knew it wouldn’t work, like linked parts, complex blends. Those were the kinds of parts where we would combine Synch and Ordered in the same part.

When the users ran into something they couldn’t get Syncrhonous to work, they would send out a help request, and a power user team would work through it with them. If we could get it to work, then the user learned a new technique.

And then the assemblies would have both Synchronous and Ordered parts in them. Doing editing at the assembly level where the component parts are Synchronous definitely offers an advantage.

In your presentation you talked about advantages such as editability, but did you see other benefits as well?

For any custom machinery manufacturer, being able to start from an existing design is very important. We don’t reinvent the wheel every time. Using Synchronous enables you to do that SaveAs for an assembly or a part, make the changes to your new part without the need to rediscover how the old model was made. There’s no need to dig through someone else’s way of working.

Another thing that was undeniable is the smaller file sizes with parts made with the Synchronous method. That really comes into play with the higher level assemblies. If you’re spending time on Open, Save and Close operations – which we did a lot of – that’s all wasted time that you get back with the smaller files.

One of the other reasons why I could see that it was important to get on board with Synchronous Technology, was that I could see through attending events like Solid Edge University and the local productivity summits that a lot of the cool new features in Solid Edge were leaning toward Synchronous. Some of the tools that I wanted my users to be able to take advantage of weren’t available in Ordered.

For example, one user came to me and said “I want to make a mirror using some of the holes in this pattern, but not all of them”, and I would have to tell them “If you had done this in Synchronous, that would be easy, but in Ordered, it’s a lot more work”. So it was time to get on board. We had to step out of our comfort zone a little bit and grow in a different direction – a more productive direction. The new features were becoming so enticing that it definitely made the choice easier to sell to management and the users. It was time to start taking advantage of some of that new stuff.

Ordered modeling is never going to go away. Solid Edge isn’t making any suggestion that it ever will. It has a definite place in solid modeling for a long time. But I think the advantages of Synchronous modeling are clear, and once you take the time to learn it, it’s a huge advantage in many situations machine designers find themselves in every day.

How did you handle training?

As a CADmin, I’m a huge proponent of custom do-it-yourself training. I like to write all of my own training for my team. It just helps when you can show them new tools on parts and assemblies that they are used to seeing. Siemens uses a motorcycle model for a lot of demos. And it’s a cool model. But seeing the new features demo’ed on a motorcycle seat doesn’t mean as much as seeing the same feature demo’ed on a part they are familiar with.

I’ve seen Synchronous at Solid Edge University. I’ve done the hands-on sessions, and the tutorials, but I never used it in a production environment. This is where the professional experience from my reseller became so important. I didn’t have time to write a three day training class and provide all the support for our users. So in this case, it made a lot of sense to start from the reseller’s existing training and customize it with our parts rather than starting from scratch.

Our reseller DesignFusion was key to our success. I worked with a number of their employees. They worked to get to know our employees and our product. They paid attention to the struggle of the users. Working with our power users, DesignFusion took their standard Synchronous training and combined it with our models to make it feel like a custom class. So the users were getting training that was relatable to them. They really brought a lot of experience with large scale Synchronous implementations under their belt. It was the perfect team to work with. They understood why we liked custom training and how important it was for the training to make sense to the users. They knew what the user’s reactions were going to be even before we started introducing them to the new concepts because they had done this before. It’s difficult for a highly skilled user to have to raise their hand and ask questions during a lab, and that was something that they anticipated. They were able to help our users through the uncomfortable and sometimes frustrating experience of becoming expert on a new set of tools.

Another advantage of using the training from the reseller was that they had already developed a course specifically for Synchronous, and they had training manuals, which we purchased from them, and use to train new hires.

In addition to DesignFusion, I need to give a shout out to my GTAC guys. They really answered a lot of questions that the users had and really helped us through this time. They were crucial. Because we mandated that people use Synchronous everywhere it worked, we sometimes had questions about why it didn’t work in some situations. GTAC was always willing to walk us through something and help us understand, or start an IR if we came across something that didn’t work as expected. They were a huge help in the process as well.

If you want to contact Melissa, she is willing to take your questions via email:

This article first appeared on the Siemens Digital Industries Software blog at https://blogs.sw.siemens.com/solidedge/interview-with-melissa-schultz-converting-a-company-to-synchronous/